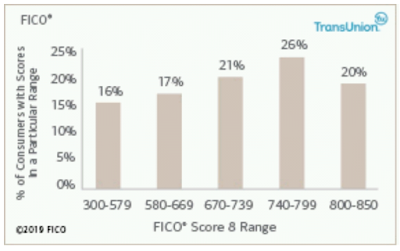 Mark and I were reminiscing about our first mortgage together.  We almost didn't qualify for a "3-2 buydown" which had an introductory rate of 8-5/8% which went up in three years to 11-5/8%.  Take that Millenials!  You think you have it so hard.  Boo-fucking-hoo.  Just kidding.  Every generation has its crosses to bear.

Anyway, his credit history, as I noted before, had a ding in it.  Back in the era of LP albums, cassette stereo, and landline phones (Internet? What's that?) he had the phone bill in his apartment in his name.  His roommates, after graduation, stayed on another month and promised to pay the bill and have the phone disconnected.   They lied.

So the phone bill went to the empty apartment, and eventually the phone was disconnected and then the phone company reported the unpaid bill to the credit reporting agencies.  The only way we found out about it was by applying for a mortgage.   A check for the amount due and cover letter sent to the phone company cleared things up.  But it illustrated how opaque the system was back then.  There was no "annualcreditreport.com" back then, as there was no "dot com" back then.  At best, as I recall, you could write a letter to the credit reporting agencies, requesting a copy of your credit report for a small fee, I believe.   Your credit score?  That was a closely guarded state secret and "intellectual property" of the reporting agencies.

Maybe a friendly car salesman or mortgage broker might let you look at your credit report, but again, they would remind you that they were not allowed to do so and were breaking the rules by doing so and thus they would not make you a copy.

How times have changed.  First, annualcreditreport.com made it possible to get copies of your credit report from all three agencies, free, once a year.  And as a helpful reader pointed out, if you space these out every four months, you can monitor your credit three times a year at even intervals.

Then came credit freezes, which cost a few dollars at first, but today are largely free.  Other "credit locking" services have been introduced as well.  And then the almighty credit score, once a closely guarded secret, was let out all over the place.   I get updates of my credit score from Bank of America, Capital One, and Credit Karma - to name just a few.   Some of these are not "official" Fair Issac (who, if you think about it, is really an unfair guy) scores, but scores that approximate the official FICO score - or one of them, as there are several, as I discovered over time.

So, the system has been improved and the consumer now can monitor their credit and see how their behavior affects their score, have erroneous information removed, and be aware if someone has tried to open credit in their name.  So, for sure, credit scores must be going up and credit reports must be improving, right?

Well, yes and no.  As the chart above illustrates, more than half the people in the USA have less than "exceptional" credit.  If you want that nothing-down zero-interest deal they advertise on the radio (and then explain the terms at hyper-speed) you need a 770 or better score in most cases.  Few people have such scores - about a quarter of the population.   But what's worse, a similar quarter of the population have abysmal scores.   These are folks who, if they are borrowing money (and they probably are, hence the poor scores) are doing so on the worst terms imaginable.   It makes one want to weep. 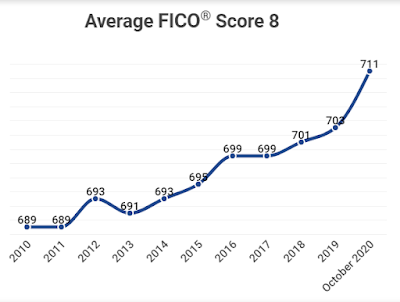 But there is good news!  In the last ten years, FICO scores have been going up, an average of a 1-3 points a year.   Of course, this is in the post-recession era, so they don't talk about FICO scores before 2010.  Sort of like the charts Motley Fool uses, which show stock prices steadily rising, since 1929.  Going back further, we see the overall trend has been upward, however, there was a bit of a hiccup back in 2009. 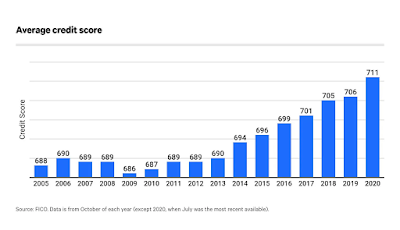 So maybe this is good news.  A reader writes that he doesn't believe we are heading toward recession, but perhaps a post-pandemic boom, as people do have money these days, and certainly better credit scores to borrow money with - and interest rates are at all-time lows (and housing prices at all-time highs - funny how that works!).

So perhaps awareness of credit score and credit reports (and in this day and age, how can one not be aware?) have resulted in improved credit scores, as people pay more attention to credit reports, and since they get almost immediate feedback about their score changes, can improve their score by improving their habits.

Or, something else.   It could also be that as our country ages, and people retire and pay off debts, their scores go up.  Since I am debt-free, my score is always over 800, hitting a "perfect" 850 at one point.  Lately it has sagged because the "age of oldest account" has decreased because older accounts "fall off" the report over time, once they are closed.  Should have kept that Sears charge card account I opened at age 21, active!  Oh wait, they are out of business.   Trying to work the system, as I have noted before, might gain you a dozen points at best - which might make the difference between 760 and 770 - but on the other hand, just paying your bills on time and not carrying too much debt does far more.

There may also be other explanations.  Scores are going up in the last ten years simply because people have recovered from the recession of 2008.  And those who walked away from mortgages or bankruptcy have had their slate wiped clean, largely, after seven years.  Scores will go up over time, after a major recession.

I suspect it is a combination of the three - people monitoring their scores more, people getting older, and people recovering from the recession.  A bull market seems to have helped too.

But even with all that, the top chart tells a sad tale about the average or median American - who still doesn't qualify for that premier financing with a lousy 711 score.  And of course, the problem is, there are still horrific deals out there that the unwary step into - lease deals loaded with turn-in fees, credit cards with staggering interest rates, payday loans, title pawn loans, buy-here-pay-here used cars, timeshares, and so on and so forth.  And entire industry has sprung up to service the "bad credit, no credit" customer because they make up more than half the country.

Even Mr. and Mrs. Middle-class can step into this dogshit, lured in by an airline miles card with a 25% interest rate.  If you fail to pay off the balance one month, it becomes impossible to pay it off the next month.  And eventually, it becomes impossible to make the minimum payment, at which point the "penalty interest" rates kick in.  So they refinance the house - on onerous terms, because their credit is already dinged - and start the whole thing over again, this time with a hefty mortgage payment and an underwater house.

I got snookered by this trap, and learned a valuable lesson. I shy away from "rewards" cards, and the one I do have, I pay off the balance daily, because I know what can happen, if at the end of the month, there isn't enough cash in the kitty to pay it off.  I treat credit cards like loaded handguns ready to go off, and no, I don't consider a "privilege" to borrow money, but an onerous obligation that could easily ruin me.

And maybe that is another reason scores are going up over time.   Maybe people are wising up and paying attention to finances for a change, because in the era we live in, you are free to ruin yourself financially, starting at age 18 with that first student loan document you sign.  Banks today realize they can make more money by ruining their customers than by working with them.  Maybe Americans are wising up to the idea that debt is not natural or perpetual nor desirable and that there is another way to live.

Maybe, but I doubt it!