The Silliness of Credit Scores - And Chex Mix! 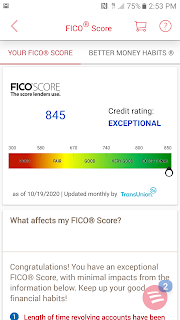 Bank of America claims my Transunion credit score is 845.  So why does Credit Karma say it is only 812?  Why should I care?

I noted before that the once top secret credit scores - which you had to pay a fee to see - are now offered by everyone from banks, to credit card companies, to credit reporting agencies, to credit karma and others.  This does not mean the information you receive is accurate or an accurate representation of your crediworthiness.

I noted that recently, Experion said my credit score jumped to 845 only because some "dormant" credit cards were now being used, which is to say, I was in the Adirondacks for a month and had no access to the internet, so I let a balance accumulate - instead of paying off my accounts daily.  Credit Karma, on the other hand, said my Transunion and Equifax scores were 812 and 824, respectively.

But today, Bank of America sends me a report that my Transunion score has jumped to 845.  What gives?  I log onto Credit Karma and they say my scores are still 812 and 824 - as of the same date.

Someone has some wrong data here - or are there more than one Transunion scores out there?  Or does Credit Karma update only every so many weeks or months?   I suspect the latter - Credit Karma can only afford to update every so often, so even though their site says "Updated October 21" I doubt it was.

On the other hand, Bank of America claims their score was updated October 19th, and what's more was previously 839, not 812.  What the heck is going on here?  Maybe there are different scores for different applications.  I have no idea.  But it illustrates how chasing the almighty credit score is a waste of time.

In a way, it is like our tax laws - they are not a guide to investment!  People chase tax deductions and credits, thinking this is how you get ahead in life.  But I think a better approach is to live your life and take the deductions and credits you are entitled to.   Sure, the depreciation deduction is a nice icing on the cake, if you own a rental property.  But you are better off owning a positive cash-flow rental property than relying on tax deductions to make it all work.  Because eventually, those deductions peter out anyway, once the properly is fully depreciated.   Tax deductions for a 401(k) and home mortgage interest are fine and all, but when the economy hits the skids (as it did in 2008) you'll find your 401(k) decimated and your house plummeting in value - but that nasty mortgage payment still due.  Maybe being massively in debt while at the same time, investing, isn't such a swell idea.  Maybe.  Leverage is fine and all, when it is someone else's money, I guess.  But I digress.

Credit scores, I think, work the same way.  Pay your bills on time and keep your financial house in order and your scores will be sufficient.  Play games and try to "game" your score, and odds are, you will end up in a world of woe.   Just a thought - my philosophy, anyway.

On another note, I finally received my CHEX report by mail.  This is another scoring system used by banks to determine whether you are checking-account worthy.  It was a much shorter report with NO DATA on it, in terms of history or reporting.  I suspect that the only time data is reported to CHEX is if a bank has a bad experience with you.  So no data means good data - or it means the banks I do business with don't deal with CHEX.  It was an interesting experiment, even if it was a bust.

Again, pay your bills on time and stop bouncing checks, and banks suddenly want your business. Funny how that works.  Took me a long time to figure it out, too!   Not sure there is a way to "game" the CHEX report anyway, as they appear to report only raw data and not some silly-ass "score" whose algorithm can be spoofed.

Maybe the credit reporting agencies should just abolish the "score" as well - it doesn't seem to be worth much to anyone anymore anyway!