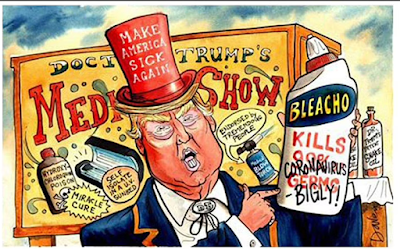 No one wants to say they hope Trump dies, of course, but it might solve a lot of problems.  Problem is, it might create a whole lot of new ones.


The first thing on everyone's mind when it was discovered that Trump was sick, wasn't "Gee, I hope he gets well soon!" but "How will this affect the election?"   Admit this and move on.  No one grieves when an abusive parent dies, and no one feels sorry for a guy who sold the world that the virus was a hoax and under control - only to catch it.

A recent article in the Washington Post, however, addresses the mechanics of what happens when a Presidential candidate dies or is incapacitated before or after the election.   It ain't pretty, but it shows another reason why we have an electoral college.  The electoral college can vote for whoever it wants, to, and if Trump is dead, presumably, one or more replacement candidates will lobby for the job, and/or the RNC will anoint such a candidate.

Oh, yea, faithless electors.  Turns out the penalty for being "faithless elector" is a small fine.  And even then, the Supreme Court has held that while faithless elector laws are valid, they are specifically not addressing the scenario where a candidate is dead or incapacitated.  No, we don't have worry about electing "Dead Presidents".

But a real nightmare might be the case where dead Trump wins the election, and his electors start a nasty fight over who should take Trump's place.  I can envision a number of GOP Presidential wannabees fighting and jockeying for the job.   President Cruz, anyone?

But on a more practical note, this illness may give Trump an excuse to "duck" the debates (Gee, where have I heard about a candidate "ducking" debates before?  Oh, right, Fox News, accusing Biden of this).  The first debate was a debacle, and as the smoke has cleared, the consensus seems to be - even among many on the Right, that while Uncle Joe lost his cool a couple of times, Trump was an unmitigated disaster.  If there is really such a thing as an "undecided voter" at this point, the debates didn't help them decide for Trump, unless they are World Wrestling Federation fans (and not World Wildlife Fund fans).

But could this illness help Trump in other ways?  A sympathy vote?   Perhaps.   It may make Trump look more human and some people may have a Florence Nightingale effect and be persuaded to vote for him out of sympathy.  Maybe.

I am guessing here, but I suspect that if Trump dies, at the very least the transition will be a lot smoother (if dead Trump loses).  I am not sure the RNC or Pence or whoever, will throw millions of dollars at legal challenges and further damage the reputation of the country and the RNC by contesting the election or alleging voter fraud.   But that is just speculation.  Maybe Trumpism runs deep in the new GOP.

What is clear is that this is a strange chapter in what has already been a strange year.