No one thinks twice about damaging Scottish stereotypes.

I was reading some old automotive brochures, and was chagrinned to see, time and time again, the use of negative Scottish stereotypes when it came to describing the engine choices.  You can get the hemi-head big-block V-8 with "flashing acceleration" (WTF?) or if you are an el-cheapo, you would settle for the thrifty six-cylinder flathead "flying Scotsman"   Those Scots - they really know how to pinch a penny, don't they?

You say that isn't offensive?  Consider the other races stereotyped as being thrifty or cheap.  Imagine a car company - even back in the 1940's or 1950's - advertising a car with the "thrifty Jew" motor inside.   There would be protests.

But it doesn't end there, does it?   The ad copy is accompanied by a picture of a stereotype Scots, with a bagpipe, natch, and wearing a Tam O'Shanter, a kilt (sans underwear), and what's that hairy thing that dangles between a Scotsman's legs?'

Oh, right, a Sporran.  Some sort of purse - no doubt where he keeps his pinched pennies and Scots whiskey.

For sure, he's a drunk, too - that goes without saying.  But it gets far worse.  We assume he engages in bestial sex with sheep, at the very least.  And how do you separate the men from the boys in Scotland?  With a crowbar.

Groundskeeper Willy.  Fat Bastard.  Everyone picks on the Scots when it comes time for a humorous stereotype, right?

So, why isn't there more outrage about Scots-bashing?  Well, for one thing, Scots are hardly an oppressed minority.  We run things.  Maybe back in the day, you had to be of English descent to be admitted to the club.  But even the English make a fetish of affecting a Scottish heritage.  Some say that the whole deal with "Clan Tartans" was just a scheme by wily Scots to sell woolen goods to English (and American) tourists who have come back to the "home country" to search out their roots.  Perhaps - or perhaps another Scottish stereotype.

But when you have so many successful Scottish Engineers (another stereotype) and businessmen, such as Andrew Carnegie and whatnot, it is hard to argue that we are an oppressed minority.  And of course, no one has used Scottish prejudices to exclude Scots from the country club or from society, as has been the case with the Irish in the 1800's and early 1900's.  In fact, our family, of mixed Scottish and Irish ancestry, emphasized the former, in order to blend in to American society.  My own father even changed his religion in part, because there were few Irish Catholics in the boardroom back in 1948.

That is the funny thing about Scots and Irish - there is a long-lived amity between the two, in part caused by the settling of Northern Ireland by Scots, many of whom were thrown off their tenant farms in Scotland as the economy migrated to mass sheep farming and the woolen business.  Both wear plaid and play the bagpipes, but there the similarities end. While Scots are stereotyped as thrifty hard-working drunkards, the Irish were stereotyped as lazy, spendthrift drunkards.  The latter has more to do with the nature of the potato economy, more than any racial characteristic, I believe.

Some stereotypes are actually admirable traits.  We claim that Asians are smart at math and hard-working - hardly the stuff of insult.  And we stereotype Jews as being smart, attractive, and good at business, medicine, and banking - again, is that an insult?   The problem arises when these stereotypes are used to argue that a secret cabal is controlling the world, or when some people call for mass murder as a result.

I am not aware of any conspiracy theory that labels the Scots as being behind the Illuminati or whatever.  But, come to think of it, one of the highest levels of Masonry is called "Scottish Rite" - coincidence?  I don't think so  (cue: scary theremin music). 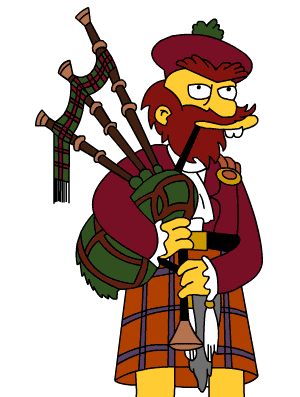