Is Fake Better Than Real? 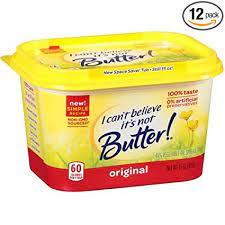 America is the land of fake - we seem to enjoy the simulacrum more than the original.

I was at a friend's house and they were serving dinner.  I was kind of amazed at how many artificial foods they preferred.   No butter, but something called "I can't believe it's not butter!" which I had no trouble believing was not, in fact, anything close to butter.   Instead of salt and pepper, they had "Mrs. Dash" because salt is bad, um-kay?   And so on down the line - beverages sweetened with chemicals that tasted sort of sweet, with a metallic aftertaste.   Of course, in America, the "real" sweetener is something made in a laboratory called "high-fructose corn syrup".

They didn't make coffee, but rather put some sort of a cartridge in a machine - and another one for their insulin pump.  I guess it is an improvement over the "instant" coffee of my Parents' era - but not much of one.

And hair.  My friend has her hair done up in a manner favored by the previous generation - the expensive "hair-do" and perm - and hair coloring - the latter of which has been linked to breast cancer.   Funny thing, she stopped doing all that and her natural hair looks better than it ever did when teased, permed and colored.

We love fake in America.   Why go to messy old Europe when we have a plastic imitation you can visit at Disney World?  It's almost the same thing - maybe better - without all those smelly foreigners and their weird old languages and suspicious foods.   Just good old American lite beer and McDonald's -which sadly, you can obtain rather easily, even in France.

Even people are fake in America.  Women have fake boobs, men have "male enhancements".  We color our hair, we have our faces lifted.  We obsess about our appearance and what we wear and use - and buy fake knock-off clothing to try to fit in.

It makes me very sad.  Because fake isn't better than real.  Fake butter - margarine - was suppose to be good for your heart by "reducing fat".   Turns out, fake butter was full of trans-fats which was about as healthy as shooting yourself in the heart.  All down the line, these ersatz imitations turn out not only not better than the originals but far worse - not only in appearance and taste, but in terms of toxicity and impact on the environment.

Butter isn't bad for you, if, like anything else in life, it is used in moderation.   Slathering on fake butter because "it is low in fat and calories" isn't changing much in your world, as the excess fake butter far exceeds any harm from a moderate amount of the real stuff.   Guzzling down four or five "lite" beers isn't better than having one or two really good glasses of beer.   That is all that fake allows you to do - give you permission to over-consume.

Of course, this is nothing new.  My parents' generation embraced and invented fake.   They felt that anything processed, from a package, and from almighty American Industry was better than some organic home-made deal.   Sugar, rice, flour, salt - all should be highly processed and white, white, white!   Chocolate should have milk in it, and taste bland and have the texture of a light plastic.  Coffee should be made instantly - from a powder!   Maybe it was the war years that caused this - everything had to be packaged for K-rations and made so it wouldn't spoil for decades.

My Mother, for example, always bought Birdseye frozen vegetables, which came in a square frozen block.   Even when fresh vegetables were in season, she bought frozen, as it was "superior" to some grubby vegetable from a farm somewhere.   No bugs in the Birdseye!  It was thought to be modern and sophisticated (and a sign of status) to be able to buy frozen foods - or so the ads from that era said.

This is not to say you should churn your own butter - leave that to the Amish.  It is only to say that an ersatz version of anything isn't going to be as good as the real thing - and certainly not better.  In fact, such things may be harmful to your health.

Whenever you find yourself trying to substitute a fake for an original, ask yourself why.  Are the promises that the fake will be "better" than the original really going to hold true?  And if you can't, for health or other reasons, indulge in the original, is a fake replacement really going to be satisfactory?  If you are going Vegetarian, the answer isn't fake meat, but to embrace vegetables.

But Americans don't get that.