Why Investigative Journalism is Dead (Watergate Was Not Profitable!) 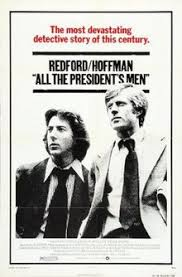 You can spend a lot of money investigating a story, or just report on someone else's investigation, or better yet, just print rumors and press releases.   They are all equally profitable to the newspaper, the latter is far less expensive to produce than the former.

There is an interesting article in The Atlantic that argues that Gary Hart was set-up in the infamous "Monkey Business" incident.   He went on a boat trip with what he thought was a friend of his, who changed boats at the last minute to the now infamously named yacht.  Hart's "friend" also invited young attractive girls along, conspired to force them to spend the night in Bimini, and allowed the girls to stage a photo with one of them in Hart's lap.   Later on, an "anonymous" tip is given to the media, and then the girls are flown to DC for a press conference - it was a set-up!

Like I said before, only after a decade or two - or three - do we know the real facts.  The "news" is often all-wrong, being too close to the story at the time - and often complicit in the story.  Why did no one ask about the source or motivation of the "anonymous" tip?   But since most of those involved are dead - or refuse to talk -  we'll likely never know for sure.

But it is well known to be true that such things do occur, and in fact, Lee Atwater - who allegedly confessed to the Hart setup, and his latest acolyte, Roger Stone, even bragged about such "ratfucking" from the time of the Nixon administration onward.  The Watergate break-in was an example of this, not some isolated event.

Right now, a similar story is going down in another race, where Cal Cunningham, a Democrat, is running neck-and-neck (redneck-and-redneck?) with a Republican incumbent in North Carolina.  Weeks before the election, someone released "texts" he made with a woman who was not his wife.  They have both admitted to the affair, so it is not clear what the scandal is, other than "adultery" which in an era of a 50% divorce rate is hardly surprising.

But the media will have talking heads blather on about whether this will affect the outcome of the election and whether more "bombshell" texts will be released (how can they be "bombshells" when the affair is already known?).  The media never talks about or asks about who is releasing the texts and why - or bother explaining this to the audience.  That isn't good for ratings.

It is like with the Hillary e-mails.  There was nothing in them, really.  But every day, we were told a new "bombshell" was about to be released and to "stay tuned!" for more information.  The media - even the liberal media - was complicit in this, as they wanted the ratings, the clicks, and the newspaper sales from this sensationalism, even if there was no real content.  Who was behind the theft of the e-mails and why they were released (and through who) was never discussed.  We now know the who and why - Putin wanted Trump as President in order to weaken America.

The media has learned a valuable lesson from Watergate:  Investigative journalism isn't profitable.  In the movie All the President's Men, Dustin Hoffman and Robert Redford play intrepid reporters trying to expose the truth!  Their heroic editor Ben Bradlee, wants to make sure the story is true before publishing it, though - anything less would be irresponsible journalism!

The reality is, of course, that once the scandal was exposed, other media outlets merely "picked it up" and then piggy-backed off the work of Woodward and Bernstein, and thus the Washington Post incurred all the expenses of investigating the story, but saw no real benefit.  I cannot find hard data on circulation from that period, but needless to say, I doubt the Post saw a significant bump in sales from the Watergate story.

In fact, no one story really sells newspapers.  Many people bought newspapers for the classified ads or the comics, not for the riveting front page stories - or at least that was the case back then.  Newspapers rely on reporters as "content creators" and as I noted before, it is a lot easier to sit at a desk and barf up someone else's press release or just print some rumor you heard on Reddit, or a Tweet from the President, such is the state of media today.  As a result, the media today is far more passive than in the past, as it is more profitable to merely fire staff and print what everyone else is printing, which is usually press releases from government agencies. We criticize the Chinese for their "State Media" which prints nothing but propaganda, but American news outlets do little more.  Even opposing views are merely press releases from the opposition - no real original thought goes into reporting these days, except of course, to slant the story.

Speaking of the New York Times - talk about a mouthpiece for propaganda!   They censor themselves for printing an Op-Ed from a conservative, and then go ahead and print a piece from the Communist Party of China - without apology.   How the mighty grey lady has fallen.   But speaking of economics, more than one person has pointed out that their circulation has increased since Trump took office, and since they became the mouthpiece for mindless Trump-hate.

And mindless Trump-hate is one thing that will ensure the re-election of Trump - by making his opposition look ridiculous.  But then again, for the Times, Trump is good for business, right?  Who's side are they really on?  Their own.

So this is how we got to where we are today.  The news business is a business, not some sort of truth-engine.

It is incumbent on us, therefor, to view news stories with a critical eye.  What is the source of this story?  If it is word-for-word like other stories, is it in fact someone's press release?  (You can google search an entire paragraph and find out).  It is incumbent on us to ask who is behind anonymous tips or who the mysterious people are who are "hacking" Hillary's emails and "releasing" them in dribs and drabs - and what their motivations are.

It usually isn't hard to figure out, without resorting to conspiracy theories.  Just ask yourself, who benefits from this? - and the mystery usually solves itself.