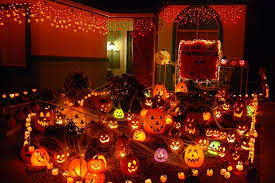 When did Halloween become a major holiday?

When I was a kid, we all kind of looked forward to Halloween. Sure, we wanted the candy, but the stress of "what are you going as?" was way too much.  Back then, you either had to make your own Halloween costume, - which was kind of tough when you were six years old and your motor skills still developing - or you bought a "store bought" costume from the five and dime. 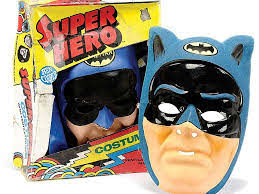 This was what Halloween costumes were like when I was a kid.

The store-bought costumes were very lame by today's standards.  They came in a box, and you could buy Superman, Batman, Witch, Vampire, Frankenstein, or Princess.   The Superman costume (which I went as, one year) comprised little more than a flammable plastic cape and a blow-molded plastic mask with two eye-holes and a mouth hole, and a thin elastic band that held it to your head.   It bore no real resemblance to Superman, of course, unless he was a burn victim. 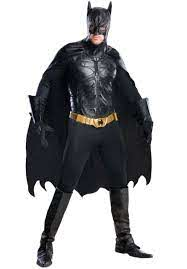 This is what Batman looks like today.  A lot has changed - we are a wealthier country!

That was then.  Today, kids can choose from a number of professionally-made costumes, which, thanks to cheap trade with China, are very elaborate.  Back in the day, these things simply didn't exist, unless you had a Mom who sewed and could make some amazing costume to intimidate the other kids, and more importantly, their Moms.

Not only have the costumes gone to the next level and beyond, Halloween decorations have gone ballistic.  Back in the day, you had maybe a carved pumpkin - or two.  Today, that is just a starting point for lighting effects, a yard full of inflatables, expensive animatronics, and whatnot.   People turn their homes into graveyards and haunted houses.

And like with Christmas decorations, the best and most elaborate displays are often in poorer neighborhoods - the lower-middle-class type.  These are people who have a lot of money pass through their hands but manage to hang on to little of it.

I have always found it fascinating that people who complain about money woes are often the first in line at the Hallmark store or the big-box store, come holiday time, to buy a new inflatable, string of lights, or other holiday paraphernalia.  My parents had little of this stuff, and what little they had was often decades old - each year, the modest displays would be taken down and packed away carefully for next year, until as the years went by, much of it fell apart or interest was lost.

So why do other people feel the need to go "over the top" with holiday displays?  Well, like all consumerism, it is a way of drowning the deafening silence in their lives.  People claim to be miserable, living from "paycheck to paycheck" and pessimistic about the future.  But a holiday!  A chance to forget your troubles and celebrate - by adding to your troubles via credit card debt.   It really makes no sense to me at all.

Problem is, it becomes a competition over time.  You put up some Indian corn husks and a pumpkin and your neighbor adds a light string. You counter with an inflatable ghoul, and they top you with two inflatables with animated features. So you put up talking headstones, and they add a skeleton.  It becomes the war of Halloween decorations.

Meanwhile, those who don't participate in this madness are shamed for "not having the holiday spirit" or some such nonsense.

Many fundamentalist Christians, of course, object to all of these types of displays. They claim that Halloween glorifies Satanism and the occult.  They claim that the commercialization of Christmas and Easter, along with the secular characters of Santa and the Easter Bunny, trivialize the religious aspects. And they may be right about that - or maybe they have found the perfect excuse to cheap-out on the whole deal, which is alright with me.  "Sorry, kids, no trick-or-treating this year - that's Satan's playground!"

And no, that wouldn't make you a bad parent.   Not indulging your kids' every whim isn't necessarily a bad thing, even if the other kids mock them for not having the best costume or the most wicked decorations.   Just buy the brat a bag full of candy and let him go into insulin shock - it's a lot cheaper.

Don't feel the need to buy yet more holiday crap every year.  It's OK to just drag out last year's junk and be done with it - or do little or nothing at all.   And that is the interesting thing - much of the "modern" holiday decorations, from inflatables to light strings, rarely survive more than a year or two.  The second or third year, an inflatable loses its gas, and becomes tattered, torn, dirty, faded, and mildewed.  The simpler holiday decorations of yore lasted for generations - often handed down from parent to child.

But again, we had a lot less "disposable income" back then - in fact, the idea that money was disposable was an anathema to us.  How times have changed.

Of course, this is not limited to holidays anymore.   You can also be the "Sports Superfan" and decorate your house, your car, and even your face in your team's colors - year-round.  Or you can devote your life and your basement to a singing star or actor, filling it up with paraphernalia, posters, and memorabilia - some of which may actually be real - all for low, low prices, on eBay or whatnot.

And while maybe you'll never actually accumulate wealth, get out of debt, or be happy, you can marvel at how perfect your decorations are.   Or maybe not.   The choice is yours - and in life, we still do have choices.