The Strangest Cup of Coffee - But It Was Pretty Damn Good! 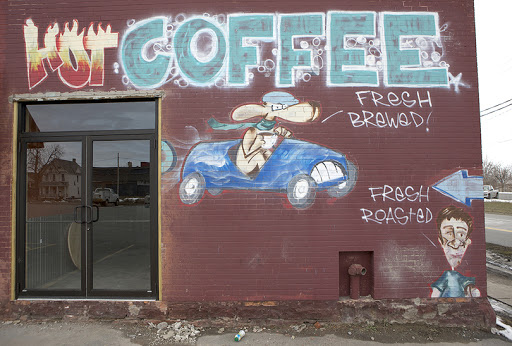 From Google Reviews: "The coffee was excellent, but I had a flashback of scoring a couple pounds of kind bud from my old connection on a farm in Green Bay Wisconsin. German Shepherds and shortwave radios..."

We went to Clayscapes in Syracuse, New York a few weeks ago to get some glaze for Mr. See.  On the way back, we saw a coffee place and I said, "let's get a cup of coffee!"
Mark always favors afternoon coffee, as his grandmother used to make a pot every afternoon at about three o'clock and serve it with some sort of cookie or something.   I recall meeting her for the first time at Shell Point Village in her apartment and we had coffee and "coffee squares" in the afternoon.  Her only comment about me was "My! He's a big one, isn't he?"   I always feel like Andre the Giant when I am around Mark's family.   Short people live longer - be short in your next life.
Coffee in the afternoon is a nice break.  But most Americans think of it only as a morning drink, and many coffee shops close in the afternoon - or try to serve warmed-over coffee from the morning.  It just isn't worth going, most times.
Anyway, down the street was this coffee place, "Kind Coffee" and we thought, "why not?"   Well, do you remember the scene in Pulp Fiction where "the spider caught a couple of flies."
When we went in, the owner was inexplicably tuning a piano.   The place was sort of like those 1990's coffee shops, with couches and easy chairs, shelves with books on them, and old throw rugs.  And while some pictures online show this as all neat and friendly, those pictures were from nearly a decade ago.
Zed's dead, baby.  Zed's dead.
For the next 45 minutes, I was treated to a monologue about how everything I knew about coffee was wrong.   I just wanted a cup of coffee and to be on my way, but he wasn't going to rush things.
Now, ordinarily, I don't buy coffee at coffee shops - not on a daily basis, anyway.  Usually, even when travelling, we make it in the camper.  But this seemed like a once-in-a-while treat and it turned into a once-in-a-lifetime experience.
I don't remember much of what he said, other than coffee should not be perked, but fed through a filter at 210 degrees Fahrenheit for no more than five minutes, with so many ounces of coffee per cup.  No perking!
I told him (when I could get a word in edgewise) that I wanted a pound of coffee, and was horrified to look at the price list and see he had coffees selling for $70 a pound or more.   Fortunately, the roast he was roasting right then was a more reasonable $20.
We finally escaped with our coffees - which were good.   But I had to wonder about the business model he had.   If you only sell two coffees at $2.50 each, every hour or so, how do you stay in business?   Maybe he was sampling too much of his wares.   I dunno.
All I do know is, it was the strangest cup of coffee I ever had.    And maybe the best, too.
Newer Post Older Post Home