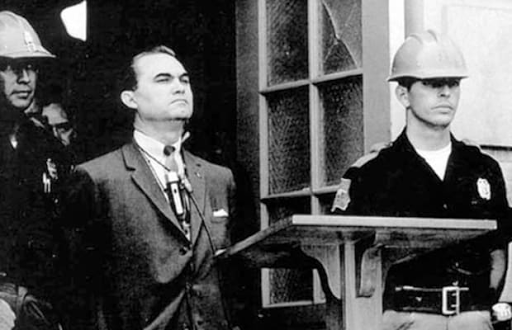 People complain about today's polarized politics - but was it ever any different?

There is a narrative in this country that in the "good old days" everything was better.   American cars ruled the road and they were better made than the "plastic junk" you have today.   AM radios and drum brakes!  Who could ask for more?  Well, maybe a car that would go over 80,000 miles before the transmission blew and the body rusted through, perhaps.

We are also told that politics was kinder and gentler back then - that Democrats and Republicans would hold hands and sing "Kumbaya My Lord!" and pass legislation unanimously.   Oh, for those good old days!  You know, back when black people "knew their place" and would shuck and jive for the entertainment of the whites - always happy to be subservient and content with what little they had.   Then the liberals had to go stirring them up, right?   Wrong.

Politics in the past were just as nasty and dirty as today - perhaps moreso.   Remember that the phrase of a "Kinder, gentler nation" was coined by Bush the First, in an attempt to hark back to the mythical times of yore - and distract from the dirty Lee Atwater politics of the present.  While talking about kinder, gentler politics and "reaching across the aisle" Bush nevertheless excoriated his opponents with things like the Willy Horton ad.  Of course, it didn't help matters any that nothing in the ad, other than the prejudicial graphics, was technically untrue.

Before then, well, Reagan and his Iran-Contra scandal.  Hey, why bother going through channels, when you can sell arms to your enemies and create a slush fund to send arms to your allies?   I mean, other than it goes against every principle of our government.   And his campaign against Carter was hardly a game of patty-cake - even as Carter was weak and easy to defeat.   There you go again.

And so on and so forth.  The antics of Nixon and Watergate rival those of Trump today.  As far as we know, Trump hasn't resorted to breaking into people's offices - yet.

Going back further, we have extreme right-wingers and John Birchers who put forth conspiracy theories about fluoridation of the water supply - about as ludicrous as today's Qanon nonsense.

Speaking of right-wing nutjobs, remember Senator Barry Goldwater?  He was considered a serious Presidential candidate at one time.

Republicans, of course, are not the only ones to play dirty - and play to win.  Kennedy was elected with the help of Mayor Richard Daley, who allegedly engaged in some voter fraud to turn Illinois to the Democrats.

And of course, what it meant to be a Democrat back then - and a Republican - has changed, almost flipped, in fact.   Democrat George Wallace literally stood in the schoolhouse door to prevent black students from integrating schools.   He later apologized for his stance, but think about how that plays out on national television compared to the "micro-aggressions" and "white privilege" talked about today.

Black Lives Matter?  Well, yes.  But back then, it was lynchings and unsolved murders, not police shootings under murky factual circumstances (which are not helped by outright lies spread on social media).

The point is, we've always been "polarized" whatever that means.   And in part, it has been a ying-and-yang balance between two opposing forces, which is the way it should be.    There are those on the Left who think the pie should be divided up equally and "fairly" among the masses.   There are those on the Right who think when you bake a pie, it is up to you to decide who eats it.   And both are right and both are wrong, in part and always.

One reason we instituted LBJ's "great society" was that we were in a cold war with Communist ideology (and still are, to some extent, today).   The Russians were selling their snake-oil to the third world as a solution to their economic problems.  We were selling Capitalism and "Democracy" at the same time.  Of course, each side was just selling power and control, but let's not go there.

The Russians would point to poverty statistics in the USA, as well as racial discrimination, the KKK, and lynchings and say, "See, Capitalism doesn't work!"   And this was a heady message in many countries, such as Cuba, where dark-skinned people were denied, from birth, any kind of opportunity based on their color.   These are the folks that even today, keep the Communists in power - the privations of Communism are a better deal for them than the poverty under Capitalism.

So, we had to clean up our act.   We could not be a nation of heartless Capitalism and let people starve or live in poverty or be subject to violence.   Our safety net of social programs was expanded and things like the voting rights act created.   Perhaps it is no coincidence that these programs were weakened after the fall of the Soviet Union.   Hey, who needs welfare when we no longer have to counter Communist propaganda?  Get a job you lazy slobs!

So welfare became "TANF" - Temporary aid to needy families, for no more than five years in your lifetime.   Renewing the voting rights act became a chore and the courts have curtailed it, at least with regard to some Southern States.

But that doesn't mean this tension between right and left is gone - far from it.  The pendulum swings one way, and then goes the other.   Each side engages in excess until the other side takes power and reverses course.  Left to their own devices (sorry, pun), the Democrats would enable more and more Socialist "reforms" to the point where productivity and real overall wealth of the nation would suffer, as it did in the 1970's with stagflation - mostly due to rising oil prices and rising wages and declining productivity.   It may sound like a swell idea to let the "workers" run the factory, but I can tell you from personal experience it is a nightmare.  Think about it - do the slackers you work with seem cut out to run things?  Didn't think so.

It may sound swell to vote yourself a raise and more time off, but when your job disappears entirely, well, zero pay is a lot worse than low pay.   So the GOP comes back into power and they promise to set things right and get the economy going - which they do, to some extent, but at the expense of a lot of working-class people.   The pendulum swings the other way.  It's the economy, stupid!  Or so said Bill Clinton.  Oh, the 1990's - those were the good old days.  What's that?  Bill got a blowjob in the Oval Office?   Good for him.

Civility in politics is an illusion.  And the further you go back in time, the worse it gets.  After all, our whole country was founded on a revolutionary war.  While we depict this as a heroic war fought against Hessian mercenaries, in reality, it was a civil war.  In researching my ancestors on Long Island, I came across the "loyalty oaths" they were forced to sign by each side, in succession.   Those who chose the wrong side had their lands and wealth confiscated, as each side in the revolution took and re-took the area.   After the war, those loyal to the crown were put in internment camps before they could be shipped off to Canada or parts beyond.   It wasn't pretty.

Our other Civil War was even worse - a slaughter of human beings never seen before in this country or since.  And the politics?  Senators beating each other with canes on the floor of the Senate - sort of makes today's "hearings" look rather tame.  Ying and Yang, and the pendulum swinging back and forth.

It hasn't been an easy ride, particularly for those under the pendulum.  But there is good news, of course.  Over time, things have improved - we have to recognize that.  Today, no mainstream politician of either party could survive long by embracing discrimination or segregation. Sure, maybe Trump dog-whistles to racists, but perhaps that will be his downfall, if people get out and vote in large numbers.

Sadly, some folks - egged on no doubt by some nefarious external forces - posit that since the system is "so awful" there is no point in voting or participating.  Unless their own chosen candidate is on the ballot or their own personal view of how things should be done is enacted, why bother?  It is an immature view of politics - expecting perfection and refusing to participate unless it is had.  This is how dictators end up in power.

As bad as our system is, it is better than most if not all. They don't have two parties in China or Russia.  You have no choices whatsoever on the ballot.  And it is no surprise that much of the agitation and psychological voter suppression is coming from those two countries (the Russians having had four more years to polish their technique).  Blocking the ballot box is just part of the GOP strategy to win this election.  Getting people to think their vote doesn't matter is the other half.

This is what elected Trump in the first place - Facebook and Fake News. The head of CNN is now admitting what I recently said - that they went after ratings and click-through revenue in the "Hillary e-mail" story, rather than engage in real News Reporting.  Maybe he is to blame in part, but the people watching this dreck and falling for these lines are also to blame.

The latest gag, of course, is the supposed e-mails from Hunter Biden.  Pray tell, how did Giuliani get ahold of his hard drive?  I mean, isn't that illegal?  This time around, maybe people will pay attention to the man behind the curtain instead of the sideshow of "coming up next!  More e-mails revealed!" - as if e-mails were some sort of dirty laundry in and of themselves.

Will people fall for this one-trick pony yet again?  Or will they realize they are being snookered?  It remains to be seen.  And I guess we'll find out in short order.

One thing is for sure - if Biden is to win without some messy court case or protracted vote-counting, he has to win by a substantial margin.  He needs a margin so great that even the staunchest Republican will admit defeat.  That doesn't include Trump, of course.  But he's not really a Republican but instead a party of one.