Pride of Ownership? No. 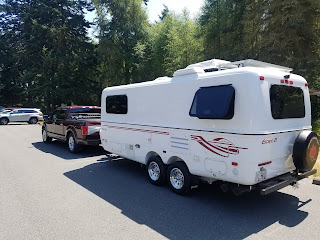 To some folks, possessions are a means to an end.  For others, they are an end in and of themselves.   Use objects, don't let them use you!

I mentioned in a recent posting about the car in a bubble how some folks acquire expensive things like cars, boats, and even houses, and keep them as talismans of ownership - where the mere possession of the thing becomes more important than the use of it.  House polishing I mentioned before - people who want to make their house into a perfect possession (thank you very much, This Old House!) rather than cherish the memories of family and loved ones who lived inside.

I ran into this effect recently when I met a couple who had an Escape travel trailer like ours.  We asked them about where they had been with it - and regaled them with tales of our trips to all 49 US States (except Hawaii, of course) and all the Canadian provinces (other than The Disputed Lands and The Unexplored Territories).  They kind of gave us a blank look.

The only place they had been with their trailer - for several years now - was to drive back to the factory every year to meet other people who had bought the same brand of trailer at an annual trailer-fest.  What?   Even the drive across America and Canada to Vancouver, BC, held no interest for them - they covered it in a matter of days.  And exploring Vancouver - particularly Vancouver Island - held little interest for them, other than to take the ferry to Victoria and spend a few hours wandering around downtown.

We've been - twice - the first time in our Casita, where we spent a month or so, and a second time in the new trailer where we spent two months.  And that is hardly enough to even begin to explore that beautiful island. But to them, British Columbia was all about going back to the factory, attending potluck suppers, and talking with fellow trailer owners about their trailers.  I just didn't get it.

I am not criticizing this - to each their own.   If they found satisfaction in such things, good for them. But for us, the trailer was a means to an end - it allows us to explore places and stay for days and weeks, without spending hundreds of dollars a day on hotel rooms and restaurant meals. The ownership, in and of itself, provides less satisfaction.  And I've learned the hard way, over the years, that I have little in common with other people who own the same brands of products as I do.

And sadly, in each of such groups, there is always some old cantankerous guy (usually a guy, usually more cantankerous than even I) who will shout down any "newbie" who has any ideas that are out of the norm.  You know, the penlight battery guy.   That is why I stopped visiting car and boat and RV forums for the most part.  It is like going on a Qanon site - they aren't interested in discussing ideas, only validating pre-existing notions.  Forums can be useful in obtaining some data, but a lot of the postings are shills for products, and a lot more are just bad data, bad ideas, or just trolls and flames.

Oddly enough - or maybe not so oddly enough - the folks who keep cars, boats, RVs and such as talismans, tend to spend a lot of time on these forums.  I guess for them, it is the social interaction with fellow owners they like, not necessarily the product itself.   Go on the Airstream forum sometime, and see what I mean (and learn what "buyer's remorse" is all about!).

It seems to be a pattern, however, particularly in America.  I know a host of people who own "collector" cars that never see the light of day, other than to be trailered to a car show, rolled out, admired for a few hours and then put back in the trailer and hidden away in a garage. Might as well get a cardboard cutout of the car and display that.  Going to such shows is, to me, somewhat boring. The meticulously restored cars that are merely displayed, I just walk by.  The guy who drove his car there and clearly works on it himself, and takes it on trips, is far more interesting, in my book.  He's using the car for its intended purpose, not just creating a car-in-bubble to be admired.  You can look at bubble-cars all day long on YouTube, if that's your thing.

I mentioned before how I met an older gentleman at the marina who was supervising a mechanic as he rebuilt the outdrives on his power boat.  I kept our boat there and knew his had not left dry rack storage in years.  He admitted as much, and I asked him why he kept the boat (which cost $3000 a year just for storage) and he replied, "Pride of ownership!"   But if something is kept on a rack in a barn, what pride is there in it?  Do you show people the cancelled checks for the storage fees or what?

A better approach, I think, is to buy a boat and use it, and when you get done using it, either because you are bored, or your "trip of a lifetime" is over, then you sell it.   There are storage lots, marinas, RV parks, RV storage lots, storage locker places, and backyards all over America, filled with "pride of ownership" decaying cars, trucks, motorcycles, jet skis, snowmobiles, RVs, and boats - most not running anymore, most worth something at one time or another before they were put in storage, most not worth anything to anyone, most an eyesore.

We were talking with the owner of our storage locker place where we keep the trailer (for now) when it is not in use.  His Dad was saying they should sponsor a garage sale once a year to help people clean out their storage lockers.  The son wisely said, "Dad!  That's our bread-and-butter!  If people actually got rid of this junk, where would that leave us?"  His Dad quickly saw the logic of this, and dropped the idea.  They make money from people paying more to store things than they are worth.  As I related before, when I closed my office, I put all the office furniture in storage and sold it off, piecemeal, over time.  By the time I was done, it was all gone - and what I realized in sales prices was equal to what I paid in storage fees.  It would have been less effort and cost the same to just throw it all out.

The material is mortal error.  Possessions are slavery.   We come into this world with nothing and leave the same way.  "Stuff" that you accumulate and discard along the way are a means to an end, not an end in and of themselves.  "He who dies with the most toys" doesn't win anything, but rather leaves a pile of depreciating junk for his heirs to dispose of - often with a dumpster.

I started this blog at a time in my life when I thought I "had it all" and realized that "things" were slowly drowning me.  We had fun with the cars, the boats, and the RVs and the vacation home and whatnot.   But when the fun was over, we did a smart thing and unloaded them all - often at a loss. With motorized anything, always at a loss.  And that is one reason so many people are reluctant to part with "things" - I paid good money for that! - they say, and don't want to bite the bullet and walk away.

But hanging on does "cost you something" as a car, boat, or RV, depreciates in value for every day it sits in your yard, and costs money for every day it is in storage.   Eventually, these things have little more than scrap value.  In the case of boats and RVs, often you have to pay someone to take them away.  Why do you think so many charities want you to "donate your used car, boat or RV?" - because they know these things are worth little or nothing, and you want them out of your life at that point.

And owning a car, motorcycle, boat, or RV and doing little more with it than taking it to conventions and shows and talking with people who own the same brand of vehicle, well, that strikes me as somewhat shallow.   But to each their own.