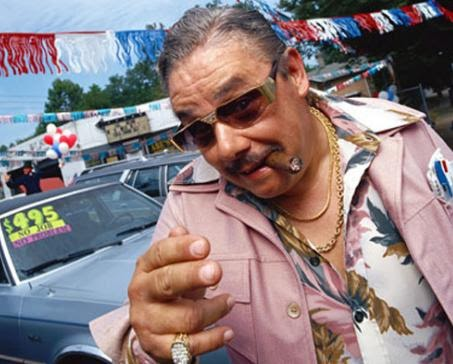 When you are negotiating a deal with someone, and they have more information than you do, you will not get a very good deal.  Sadly, for most of us, this informational asymmetry is the norm.


I mentioned many times before how the car dealer is a prime example of how people get ripped-off, but mostly because they don't bother to do much research before trotting off there.  People go to a dealer with no idea what kind of car they want to buy, how much is a reasonable price to pay, or what loan rates are available. Some folks wander into a car dealer with no real intention to buy anything, and leave hours later with a new leased car that really doesn't fit their lifestyle at all.

The dealer has a lot more information at its fingertips than you can have even through extensive research.   And yet, most people don't even do the basic research.   A savvy car dealer or salesmen, can figure out what your trade-in is worth, and what he can get away with giving you for it, the moment you drive it on the lot.  This "we have to take it away for inspection" nonsense is often just an excuse to play the trade-in hostage game.  They know what a five-year-old Camry in typical condition is worth - and they will likely wholesale it, anyway.

The salesman can tell, from what kind of car you are driving, and the condition it is in, a lot about you, too. So right off the bat, you haven't even gotten out of your car, and you are at an informational disadvantage.   They also know, chapter and verse, what the new cars are selling for, what the "dealer invoice" is, and what the dealer actually paid for the car, and so on and so forth.  They can figure out, just by looking at you, whether than can sell you undercoating and floor mats.   It is a shark tank, and you are the chum.

On the other hand, if your neighbor down the street is selling his old car, chances are, the two of you are at an informational stalemate. He knows about as much about cars as you do, and you know about as much about each other.  At most, one of you has looked up the book value of the car online, and has a vague idea about its value.   You negotiate on price, and that's that.  That is why private party sale deals are often the best bargains, unless you run into a "dreamer" or "schemer" who thinks his car is worth more than book value and it is a privilege to buy the car from him.  Run away from such folks.

In most transactions in life, you will be at a woeful informational disadvantage. At most, you can compare prices and try to compare quality - the latter being harder to discern.  Say you want to remodel your bathroom. You are not "handy" with tools, so you hire someone. You get quotes from three contractors, and they all are within a certain range.  You have some data here - three prices to choose from. You might be able to look up the prices of the components online and see if the prices the contractors are quoting are reasonable.

You may be able to ask friends and family members about the reputation of the contractors.  You could try to use something like Angie's list, or other online review site, but that data is mostly noise and not signal - there is very little useful information, if any, from online sources, about reputation, I'm afraid. You really are buying a pig-in-a-poke, which is why most homeowners bitch and moan about remodeling costs, even if the contractor does a decent job at a reasonable price.

So how can you overcome this?  To a large extent, you can't.  It can take a lifetime of experience to understand just one narrow area of commerce, and even then, such data ages rapidly.  I worked for Carrier for five years or so, but that was nearly 40 years ago.  Today, they use refrigerants that we never even heard of back then (and all the stuff I used, which burned a hole in the ozone layer is largely gone).  A lot has stayed the same, but then again, a lot has changed.  Inverter-controlled variable-speed compressors and fans and whatnot, microprocessor-controlled thermostats - stuff we were just starting to develop back then are now the norm.  Things like Internet thermostats - as useless as they are - we never conceived of.

But ancient information can be better than none at all - or even more dangerous, as I have discovered. It is like the fastener aisle at the home improvement store. They changed the kind of pressure treated woods we used,  and you have to use the correct kind of fasteners.  They even have plastic trim lumber now, and that uses another kind of fastener.  If you use the wrong kind of screw in today's pressure-treated lumber, it may literally rust to pieces and break off.  There is a real danger in using outdated data.

I spent 30 years in the Patent business.  Today, I could not tell you what is a "fair" price for an Attorney to charge for a Patent Application, nor could I tell you much about the latest court decisions about software and business-method Patents, or the newest procedures at the USPTO.  That's one reason my older bosses hired me on from the Patent Office - my experience was fresh and up-to-date, although they had the advantage in the wisdom department, seeing the big picture better than I could as a newbie.

Investing is another area where we are blindsided.  As I noted before, many amateur investors look at nothing but stock price as the end-all to investing - and a host of scam websites harp on this as well. The pump-and-dump operators use stock price charts to snooker the unwary. "WillGrowCo went up in price 50%!   It is poised to take off!  Buy now!"  What they don't tell you is that the only reason the price of that penny-stock went up is that they bought some, and that the price will indeed "take off" at which time they will sell, and the price will tank yet again.

If you bothered to look at the metrics of the company or do any research at all, you'd realize that it is either some dormant company or a small, family-owned company whose stock is more of a placeholder than an investment. Or you might figure out that the company has no real products, no profits, no dividends, and no future. The stock price alone, and its direction of travel, are meaningless pieces of data, in the big picture.

Recently, the stock market has been on an unexpected tear.  Despite the savaging of most American businesses by the epidemic, the stock market has boomed - at least to recover its losses, for the most part, since the beginning of the year.  Who is driving up stock prices?  Mostly small investors, it is said. Again, the price of a stock is not an indication of its actual value, but what the last chump who bought a share paid.  Hence, things like "Market Cap" are meaningless, as it is just the overall number of shares, multiplied by the amount the last chump paid (usually the highest price paid for a share) and doesn't even factor in the staggering amount of debt many companies have today.

And just as in the last recession, people are trying to recoup their losses with sketchy "investment" techniques, such as day-trading.  Back in 2008, my neighbors were gushing over a day-trading "system" they wanted me to try (no doubt getting a commission if I bought into this MLM nightmare).   I politely declined.  Months later, I asked them how that was working out, and the wife said, "Don't ask about that - sore subject!"   Now, a decade later, a new generation of idiots is jumping on the same bandwagon, convinced a former sports-betting blogger has amazingly turned into a stock expert, overnight.   Yea, I guess that could happen, eh?
Stocks are a classic example of where you are at an informational disadvantage.  And that is one reason why I got out of stocks entirely, and why I say stock-picking is for chumps.   But when I did own individual stocks, I tended to stick with staid, boring, dividend-paying shares of companies that actually made things and made profits.  No "WeWork" con-jobs or other "hot" IPOs or companies that were hemorrhaging cash and yet had a "Market Cap" greater than the GDP of France.  It goes without saying that I didn't invest in anything the shouting guy said to invest in, anything touted on the Internet, and anything mentioned on Reddit.
As I noted before, you can spot a raw deal from 100 yards away just from the way it is presented - and in that regard, informational asymmetry can be countered somewhat.  I don't have to do extensive research on car prices at the local Toyota dealer, as I know they are a rip-off from the various skeezy promotions they send me via the mail, or the scandalous prices they post for their used cars, or the way they outright lie by posting alarmingly low prices in foot-high letters on a car out front, only to later admit that that price is only available, in theory, on a stripped model they never have in stock.   When you deal with liars, well, you can expect to be lied to again and again.
Similarly, when you hear a lot of hype and promotion about an investment, you can be pretty sure it is a con-job without having to spend countless hours doing the math and figuring it out.   The bathroom remodeler with the loud ads on the radio and cable TV probably isn't the best bet - odds are, he is paying for those ads by charging a lot of money and doing substandard work.   On the flip side, if you get three or four quotes for a job, and one of them is alarmingly low, odds are, that contractor will either do a crappy job, or just take your money and run away (after sledgehammering your bathroom to bits, first, of course).
Or take this student loan nonsense - it has been going on for well over a decade, now.  But right this very minute, there is a student at the bursar's office, signing loan documents for a degree in religion or something else useless.  Five years from now, they will decry the unfairness of it all - as if this whole scenario hasn't been visited on a generation before them, and as if the news media doesn't print another sob-story article every day of the week.   Informational Asymmetry isn't the same as being willfully ignorant.
It really isn't hard to figure out.  But amazingly, people go back to the well of woe again and again for more abuse - never learning from the last carnival barker who ripped them off. They blithely assume that since a mattress store has a catchy jingle on the radio and outlets all over town, that they must be a "legit" business, and that paying $5000 for a mattress and financing over ten years is a reasonable proposition.  They turn their nose up at the local diner in favor of a fast-food chain with a shiny new building.   They follow the herd, and the herd is never wrong, even as it stampedes off a cliff.
Maybe there isn't a lot you can do to counteract informational asymmetry, but there are a few obvious ways of leveling the playing field.  Sadly, few people choose even to do even that!
Newer Post Older Post Home