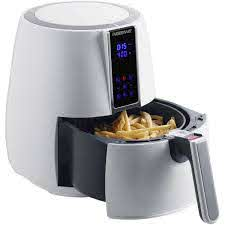 There are some foods best left for special occasions when dining out.  Trying to replicate a restaurant experience at home is often fruitless.

I am noticing a lot of "healthy food fryers" on the market.  My mail-lady has one, and I see "air fryers" on the shelves at Walmart. This reminds me of the trend a few years ago (decades ago?) when the "Fry Daddy" hit the market.

Generally speaking, small special-purpose counter-hog appliances are pretty worthless and an unnecessary expense, storage hassle, and cleaning hassle.   For example, when Mark worked at Williams-Sonoma, and later at Sheets 'n Things, we got a lot of this junk as people would buy them, and thanks to a generous return policy, bring them back, where they would be marked down to nearly nothing and then sold to the staff for a few dollars.  You wonder how retail chains like that stay in business!  Oh, right, that.

These sort of appliances are not all that expensive - often less than $100, sometimes less than $25.  But some, such as the fancy coffee makers, can run into the thousands.  Our overly-intense coffee guy suggested that spending a couple of grand on such a coffee maker was a "good investment" over time, as they are well-made.  Maybe so, but I will be content to be a coffee plebe with my 99-cent thrift shop stove-top percolator, which has no moving parts.

We still have some of these appliances, sad to say.  They reside in a cabinet in the garage, rarely used.  A 50-cup coffee maker - from Mark's catering days, and a Panini press. The latter is used rarely and makes a big mess and is a PITA to clean - and never really comes clean, as melted cheese and butter tend to bake on to surfaces.  Long gone are things like the espresso maker (the stovetop variety works just as well if not better - no Cuban kitchen is without one!) and popcorn maker and waffle iron* and whatnot.  And yes, decades ago, we had a "Fry Daddy" given to us as a gift or hand-me-down from a friend.  We used it twice and then tried to clean it.   Forget that!

That is the problem with this stuff.   Deep-fried foods are, of course, not good for you.   But it is hard to deny that deep-fried onion rings or shrimp or french fries are yummy.   This does not mean you should eat them every day or try to make them at home.   Trying to home-make fried foods is not only messy, it just isn't the same.  The restaurant has a deep fryer that is on all the time, basically. They have gallons upon gallons of fryer oil, and can "drop" an order of rings or shrimp and have them ready in a matter of seconds.

Meanwhile, your "Fry Daddy" takes an hour to heat up, and even then, is not has hot as the one in the restaurant.  In addition, being so small, it has a pathetic capacity for food.  Unless you like making one french fry at a time, forgetaboutit.   And when you are done, what do you do with all that congealed cooking oil?  Dump it out or let it go rancid?   The restaurant has a contract with a company that literally comes and pumps all that stuff out.  You have the unenviable job of trying to put that glob in a old coffee can or whatnot.

A far better approach - in my mind - is to save those sort of foods for a special night out.   Let's face it, it's bad for you anyway, so eating that junk at home is a bad idea from the get-go.   Trying to mimic a restaurant meal at home is nearly impossible to do.

Now, granted, some things are indeed possible.  Potatoes, if sliced thin and placed on a cookie sheet with some oil, can be fried in the oven.  Frozen hash browns seem to work the same way in a toaster oven (and far less oily).  But frying on the stovetop?  What a neat way to make an utter mess of your kitchen.  And I am not sure an "air fryer" is going to be any better - you might as well just get out a hair dryer. Besides, all those dealies are is just a convection oven on steroids. You might as well buy a toaster oven with a convection feature - at least it is not a single-purpose appliance.

The air fryer has all the markings of a fad.  They are selling this on the premise that it is "healthier" when in fact, the most unhealthy part of a plate of french fries is all the starch in the potatoes, not the vegetable oil used to fry it.  Fat does not make you fat, and low-fat diets are appropriate for people with certain medical conditions.   However, eating a plate of french fries, even if cooked with a hair dryer, isn't going to make you healthier or lose weight.  Massive amounts of carbs are bad for you, period.

But if you are going to eat them, save it for a special occasion, and get them fried the real way, not hair-dried.  Because let's face it, if you are going to sin, at least sin right.  There is nothing worse than trying to sin on the "lite" side.  It just makes you crave the real thing even more.

Leave the air fryers on the shelf, next to the quickie-pots or whatever was last years' trendy appliance (the rotisserie chicken cooker from Ronco?).  No, they are not going to "change your life forever!" as they promise on the television.   They will just make you a little poorer and increase your credit card debt a little bit, and make you a little more depressed as you realize your life hasn't changed much at all, other than to reinforce the notion that you are a sucker and further in debt.

*MEA CULPA:  A reader writes that he would not part with his mother's antique waffle iron. I agree, and if I had my mother's 1948 Sunbeam which she received as a wedding present, I would probably hang on to it. choose your counter hogs wisely!