Voting is a Group Effort 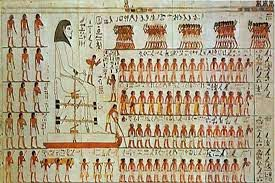 Like building a pyramid, it takes more than one person to accomplish great things.

A recent article online illustrates the ham-handed attempts by the far right to swing the election.  It is one of a number of similar articles appearing in right-wing media, arguing that voting doesn't matter, so don't bother voting.   One of the most absurdist arguments made in the article is that the odds of your vote determining the outcome of an election (e.g., one candidate wins by one vote) are millions to one.

But voting is not a solo effort but a group effort.  In ancient Egypt, they built massive monuments by having thousands of people work together in concert.  And contrary to popular view, not all of these people were slaves, but rather citizens of the realm, who felt it was a honor to serve the Pharaoh by building these monuments.  Teams competed against each other to see who could move the most stones.

And it is true, that if one of these hundreds or thousands of laborers dropped out, it wouldn't affect the construction of the pyramid.   But if ten percent dropped out - or fifty percent - then the work would grind to a halt and the other "team" would win.

This is why it is important to win elections by wide margins, and not narrow victories.  Under normal circumstances, even with best efforts, there will always be spoiled ballots and absentee votes not counted, or people who get to the polling place after it closes.   You need to win by more than one vote, or your victory is not assured.

If you can persuade even a few of your opponent's voters not to show up, it could turn the tide of an election - particularly when used in concert with other techniques, such as voter intimidation, misinformation, ballot stealing, legal challenges, closing polling places, late-night legal challenges, and voter confusion.  The Republicans are using all of the above in an effort to cling to power.  And part of this effort is psychological - to get people, using articles like the one above, to think it doesn't matter if they vote or not.

It will get worse as election day gets closer.   All it will take is for one armed "Proud Boy" election "observer" to "accidentally" discharge his AK-47 at a polling place (preferably one favored by Democrats) to shut the place down for a Police investigation, which would take all day and effectively disenfranchise everyone who votes in that precinct (and any attempt to count those voters will be met with one legal challenge after another).

Any business relationship you enter into predicated on a lie, will only go downhill from there - it is one of my "quotable quotes".   But it also applies to political relationships.   What does it say about the GOP that they have to resort to things like putting up fake "ballot drop-off boxes" in California?   I mean, not that such goofy efforts will turn the State's electoral college votes to Trump.   When you have to resort to ham-handed techniques like this, such as having "poll watchers" assault election officials, it makes you wonder - why can't they just win on their own merits?

Oh,right.  If they had to do that, they'd lose.

To win the electoral college vote means winning not just the popular vote, but the popular vote in several key States.  This is not the action of an individual, but a group.   And if enough people drop out of the group, due to messages like the one above, well, we all lose.