Got To Stick With It, Donnie! 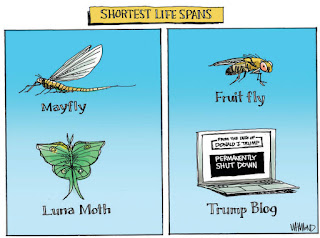 After more than a decade and nearly 5,000 posts, I have learned a lot about blogging.  Sadly, most bloggers give up after a short period of time.

Donald J. Trump had a blog.  Imagine that.  After being shut out of Twitter and Facebook, he decided to try the blogverse.  It lasted 29 days.  I imagine his followers couldn't find it, as it wasn't on Facebook and easy to find.  No doubt they were challenged by the long format, too.

It is pathetic, but it appears that the Trump blog has fewer hits than even my little corner of the internet, scoring only thousands of hits, rather than millions, as he had back in his Twitter days.  So what went wrong with the Trump blog?  I mean, it was a wide-open platform for him, with no "censorship" or whatever.  Why didn't this format work for him?  I think a number of reasons:

1. Put a Fork It It:  He's done.  Former Presidents fade away, and while the GOP is pledging fealty to Trump, I think a lot of mainstream Republicans have moved on.  Like I said before, my Republican friends (and no, they don't have tails!) were pro-Trump up until January 6th, at which point, all their Trump yard signs came down at once.  There is only one person left on the island, that I am aware of, that still is a "believer" and even then, they have a discreet "Not My President!" sign in their living room window (left over from the Obama years) and I think even that is gone now.

2. The Media:  Trump had 22 million followers on Twitter, but 19 million of them were journalists. The other two million were sock-puppet accounts from Russia.  The media loves Twitter and thinks that a posting on Twitter is a news story.  Not many ordinary folks are on Twitter or follow it.  Who has the time?  With Facebook, Instant Messaging, E-mail, TikTok, plus all your porn and hookup sites you visit, who has time for Twitter?  I am being facetious, but I know folks who do look at their phones all day long, and they do have to triage what is and isn't important.  And Tweets fall off the map pretty quickly.  And let's face it, the latest Tweet outrage will be reported dutifully by the news - so why bother following Twitter?   Since January 6th, the media has stopped amplifying Trump's remarks, mostly because they no longer sell clicks anymore.  Supporter or detractor, you don't really care much about what Trump has to say, now that he is out of power.  On the other hand, a juicy story about Biden generates hits!

3.  Nothing to Say:  If you blog, you have to say something, otherwise why bother?  And Trump's litany of grievances, well-suited to snarky Tweets, don't play well in the long format.  A blog entry that is just Trump saying "Stop the Steal!" 500 times isn't very interesting.

4. Persistence:  Trump wanted to make a splash, but it can take years to develop a blog following, even a modest one.  But that isn't Trump's style, is it?  He's not the guy to slowly build anything up, over time, laying a foundation that will be the base for something long-term.  No, he's more of a hit-and-run kind of businessman.  Make a splash, make a little money, and then run away from the smoldering wreckage you leave behind.  Business deals, casinos, marriages, the Presidency - it is a pattern with him.

5.  Vanity:  Once it got out that Trump's blog numbers were lame, well, it was the writing on the wall. This is a man with the emotional balance of a 6-year-old - a spoiled brat six-year-old.  If he can't win at a game, he throws a tantrum.  I am sure when he was a kid, playing Monopoly, the threw the board in the air, once his brother put hotels on Boardwalk and Park Place.  Years later, he would do the same with the real Atlantic City.  Trump cannot stand to be embarrassed or humiliated, so he pulled the plug on the blog before he could get it started.

Blogging and Tweeting are wildly different things, as is Facebooking.  Putting things on your "Wall" on Facebook is akin to spraying graffiti on a real wall.  Ditto for Tweets. Messages are short and simple, and there isn't a lot of thought put into them.  Blogging, on the other hand, is a more contemplative pursuit.  Contemplative - does that sound like Donald J. "short attention-span" Trump? Hell no.

It is emblematic of his problem that towards the end he was putting up ten posts a day.  I am kind of doubting they are of any great length.  The master of the short-form was flummoxed by the long-form.  Trying to Tweet on a blog site is a square peg in a round hole.

The Internet has a short attention span just as Trump does.  I think people are ready to move on to the "Next Big Thing!" and Republicans are focused more on the 2022 midterm elections than they are on the 2024 Presidential one.  And it is possible they may find Trump more of a liability than an asset, with each passing day.

There are plenty of platforms that Trump can use to get his message out, including his own website and blog.   Tellingly, these don't seem to garner much interest these days.   Is it the man, the message, or the platform?   If your message doesn't resonate without the platform, that says something.

UPDATE:  After writing this, I realized that the medium was essential to Trump's success, and this reminded me of the phrase coined by Marshall McLuhan, "The Medium is the Message" which I never really understood, perhaps, until now.  Trump without Twitter, or some Twitter-like platform, that allows him to bully and prod and provoke, just doesn't work, as his blog illustrated.  He wants to get a reaction out of people, and the media, who is hooked on Twitter, was all-too-happy to react.  A dusty old blog?  Entirely different head.

The medium is the message!  I think I get it, now.