Trump L'oeil - Fool The Eye (And The Brain!) 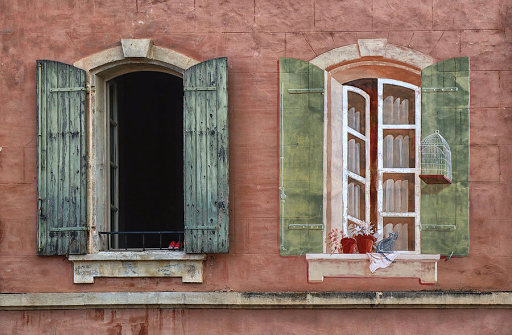 We are driving through rural Georgia, and right downtown, in a small town, is a huge mural, 40 feet high, with a giant red-white-and-blue "Q" and the words, "Where we go one, we go all!" which is a totally nonsense phrase that means nothing but sounds cool to clueless people.  How can so many people be snookered by what is an obvious jape?

Turns out, it ain't hard to do.  It isn't hard to convince people, via a television advertisement, that renting-to-own furniture is a good deal, because you get all this "good stuff" now and pay later.  What could possibly be wrong with that?

It isn't hard, via the Internet, to set a young teenager off on a holy Jihad or to become a bride-of-ISIS, if they think it is cool and daring and gets them out of their "boring" life in suburbia.  With a little more persuasion, you can get them to strap on a suicide vest.  It ain't hard to do - it goes on all the time.

And it went on before.   You may recall the idiots in "Jonestown" Guyana who were dumb enough to blindly follow a "guru" even to the point of drinking poison and feeding it to their kids.  Or the Manson "family" - a little drugs and some mystic nonsense, and you've got followers.  Or remember that cult of web designers who all killed themselves, convinced an alien spacecraft was going to pick them up?  Or what about David Koresh and his wacked-out clan of followers?

The list goes on and on, and way back through history.   That is why Abraham Lincoln made that famous quote about fooling people.  And speaking of which, the belief in the "lost cause" of the South was certainly nonsense for the poor white-trash farmers who fought to preserve slavery - even though they owned no slaves of their own, and in fact, were competing against slave labor on their tenant farms.   Hmm.... Their descendants are probably the ones who put up that Q mural.

It is far easier to convince people of utter nonsense than absolute truths.   I get a lot of push-back - as so many do - when I say that a Timeshare is a rotten deal and that MLM schemes are a scam.  It is like trying to "argue" with an anti-vaxxer or a flat-earther - two of the latest manifestations of this incredible insanity that seems to be part of the human condition.

Act rationally in an irrational world has been the mantra of this blog.  You don't need to become a raging true-believer to get ahead in life, just one of the fewer and fewer remaining rational actors.  So many people I run into are convinced there is a "secret to wealth!" that they can obtain, if only they pay for it.   The idea that there is no secret, but rather just spending less than you make, paying your bills on time, and investing the surplus, is an anathema to them.   That's hard work!  There has to be an easier way!  After all, all those "other people" have so much money and never had to work for it!

It is, in a way, kind of insulting.  I recounted before a friend of mine who said, without irony, that I was "lucky" because I had money (it just fell from the sky!) while we rode around in their $50,000 leased pickup truck.  Fourteen years of night school, struggling with shitty, minimum-wage jobs, staring my own law practice, sheet-rocking an investment property at midnight, so I can go to work the next day.  It was all dumb luck, I tell you!

But a lot of people believe it - that some are "more fortunate" than others, and it has nothing to do with hard work or being smart or just not believing in utter nonsense.  And it is funny, but the common denominator of all these nonsense theories and cults and whatnot, is that they are detrimental to your own finances, mental health, and physical health.   Sitting in front of the television (or a computer) for four to six hours a day, whether it is watching "reality" shows or "the news" or a video game, isn't really helping your bottom line.  And no, don't bore me about "some guy" you know who won big on Fortenite.  Every casino has one winner - and a plethora of losers.   Casinos - another form of cult!

The image above is a Trompe L'oeil painting - a French phrase for "fool the eye."   When done well, it can be hard to tell which window is real and which is a painting.   Many people get taken in by the fake.  It struck me, thinking of this phrase, how it applies to our ex-President, who has fooled some of the people all of the time, and all of the people, some of the time, with this plaintive cries of "election fraud!" and "stop the steal!"   It is the same shit, different day.  And funny how the word "Trump" is a homophone of "Trompe" in French, which translates into "deceived."

It is one reason why I rail against conspiracy theories in this blog - and get push-back from "true believers" who e-mail me and say, "well whatabout all the inconsistencies in the official story?"  But of course, many, if not all of those are made-up, or just irrelevant.  A typographical error isn't proof of a conspiracy, just proof that humans are error-prone.

But let's play a thought experiment here.  Suppose, for the sake of argument, that every conspiracy theory is true?  Vaccines cause autism, the world is flat, the moon landing was faked, and so on and so forth.  Highly improbably and indeed, in my mind impossible.  But let's assume this wacked-out world view was actually correct in some parallel universe.

How does that help you in funding your 401(k) or paying off your credit card debts?

The answer is, not only does it not help, it detracts.   Believing in conspiracy theories is a sign you are suffering from mental depression, and are using these theories to distract yourself from what is really going on in life - because the "real" game of life is a lot harder to play, and let's face it, you're losing badly at it.  But on the conspiracy theory website, you're a king!  And that, in short, is why people invest their lives in this Qanonsense bullshit, as their own lives are a trainwreck - heavily in debt, with no savings and no real future.  But a conspiracy gives their live meaning - a false meaning, of course, and one that will eventually come crashing down around them - until they latch onto a new conspiracy or scam the next time around.  It is no coincidence that the average Qanon person also was sucked in MLM and is likely an anti-vaxxer.   Where we go one, indeed!

The problem with Trompe L'oeil is that while the false image may look convincing  from a distance, if you try to drive into a Trome L'oeil tunnel, you will go smack-dab into a concrete wall.  Ask Wile E. Coyote about that!

It is sad, but in my own life, I have seen friends and family members fall down this Trompe L'oeil rabbit hole.  It started out innocently enough with an Eric Von Danekin book, and slowly worked its way to gun paranoia and government conspiracy theories.  Yes, drugs were involved, as well as mental health issues.  It is tragic to see, someone who you liked or even admired, slowly dissolve before your eyes, turning into a raving lunatic holding forth on the evils of the world for hours on end, while unable to hold a job (because of same).

But even if someone doesn't go from mild to wild, in the mental illness department, there are still ways to destroy, or at least degrade your life by becoming a causista while neglecting your own well-being.  No, it isn't "selfish" to fund your own retirement and pay down your debts instead of worrying about conspiracy theories or even routine politics or the "greater issues at stake!" - it is part of the unwritten social contract.  When you do good for yourself, you do good for society, by not being a burden to others and by paying into the system.  You want to improve the world?  Get a job and pay taxes - much of that money goes to help people.  Being broke and destitute just means you become one of those people the rest of us has to help - sort of defeats the whole "saving the world" concept, doesn't it?

Sadly, it seems we live in an age of unreason. But I think this, too, will pass, but not without more disruption.  Every time a new form of mass communication comes along, there is conflict and often violence, as people get riled up by these things.  The printing press put bibles in the hands of everyman - in their own language no less.  This broke the monopoly the Catholic Church had on Christianity, and it lead to centuries of warfare and death.

The radio allowed belligerent strong-men to broad-cast their messages of hate to the masses.  Hitler and Mussolini would not have succeeded as they did, without the radio and other mass-media and "propaganda" to sell themselves to ordinary people - to make their extremism seem normal.

Today, the same.  The Internet is a new form of communication and it - and the smart phone - have literally changed the way we think.  We no longer go down to the library to research things, we click on a link, and on the Internet, everything looks equally plausible, particularly to unsophisticated people or folks born after the Internet era started.  The fact that "respectable" news sites are often biased one way or another - or have eliminated reporters and fact-checkers to cut costs, doesn't help matters any.  People don't know what to believe, anymore.  And so, it is much easier for our former deceiver-in-chief to succeed in spreading lies and hate.

But just as you can spot a raw deal from 100 paces, without having to "investigate" all the details, you can spot a conspiracy theory or cult belief system - or other time-waster - just from the way it is presented.  Does whatever it is they are selling sound convenient to you? Does it ultimately detract from your life - financially, emotionally, or physically?   Pining for the end times or "guaranteed basic income" or whatever have two things in common:  they ain't gonna happen, and it doesn't really benefit you one iota to believe in either or squander your precious resources promoting them.  And yes, you time is your most precious resource.

Eventually, most people come to their senses - but as President Lincoln famously noted, not all of them.  In Germany today (and indeed, in the USA) there are a small minority of people who think "Hitler was Right!" and just misunderstood.   But the vast majority of his supporters changed their minds about him, when they saw what his policies did to their own country, not to mention what it did to others.

There will always be true believers, and years from now, there will still be Trumpers who will bore you about how Trump will rise from the grave (his death was faked, you know, like Elvis') and come back to rule us like a God - turning the entire United States into one big bankrupt casino.

Hey, it could happen!  But only if we let it.