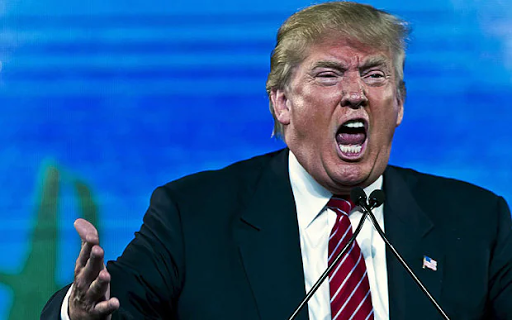 For ISIS and other terrorist organizations, Trump is the ideal candidate as he makes us look like bullies and idiots.


When I was in Junior High school, I used to take the bus to school.  My house was the last stop on the route, so by the time I got on, I had to stand for the three mile ride to school.  There was a pig-tailed little girl, possibly in the fourth grade or so, who would sit near the front, and she was like to tease me.  I don't how how it started or why, but she would poke and prod me and try to provoke me by saying nasty things to me.  Maybe she had a crush, I don't know.   She was annoying as shit.

The problem was, I was a few years older than her, twice her size, and a male.   If I hauled off and whacked her one, she would start crying and claiming to be a "victim" and no doubt the bus driver would say what a horrible bully I was, and I would be suspended from school for hitting little kids.   In fact, nothing I could do would work in my favor.  If I talked back to her, or even prodded her back, that just encouraged her more.  It was a lose-lose situation.

ISIS is like that little pig-tailed girl.   Small and whiny and annoying, but you can't haul off and bitch-slap her without looking like a jerk yourself.   ISIS doesn't have nuclear weapons.  ISIS doesn't have a single aircraft carrier - or indeed any serious aircraft.   They are small and weak and despite what you read in the paper, they are on the run, losing territory, leaders, and soldiers, with every passing day.   It is not a matter of whether the "Caliphate" will fall, but when.   But of course, even after they are mopped up, you can bet some other group, or the remains of that group, will continue to cause trouble.  It is a never-ending battle.

What ISIS wants to do is bait us in the classic sense.   The reason they commit horrible atrocities is to get attention - like that little pig-tailed girl - and hope we haul off and smack them good, so they can cry "foul" and show that the benevolent United States is carpet-bombing civilians and blowing up hospitals.   Moreover, they are hoping we will do stupid things like "ban Muslims" and basically give away the freedoms we have in the Bill of Rights (freedoms hard-fought and won) so they can point out our Hypocrisy.

"The Americans talk about freedom," they will say, "But look, they now censor themselves, suppress free speech, and suppress the freedom of religion!  They claim to be free, but they are just slaves!"

And they would be right - if we let them get under our skin and allow them to bait us into giving up our own freedoms or commit atrocities to squash what, on the world stage, is really an insignificant mosquito.

So how did I deal with the little pig-tailed girl on the bus?  Well, first of all, I realized she was not a real threat to my well-being.   While she may poke and prod and say nasty things, she wasn't going to hurt me, unless I was dumb enough to play a 4th grader's game.   Ignoring her was the best solution.   Eventually she got tired of playing the game and stopped.

Reacting or responding to her provocations would have been the worst thing I could have done.   I would have ended up in trouble.  She would have "won" and I would have "lost" - big time - all over nothing.

This is not to say we should ignore ISIS.   On the other hand, if we allow ourselves to be baited by ISIS, and are reactive rather than proactive, we could end up being drawn into a nasty mess.    Already there are civilian casualties in this war in Syria.  Carpet-bombing civilians isn't going to win the larger war, and only create more martyrs for jihad.

ISIS is already losing the war.   Every day more territory is lost, another city is taken, another supply line is cut off (supply lines that lead right to the borders of countries that claim to be enemies of ISIS, such as Turkey).   The recent terror attacks in Paris are not a sign that ISIS is winning, but rather that it is losing and getting desperate.  They cannot win on the battlefield, so they are moving the battlefield elsewhere, hoping for a "Hail Mary" pass (if you'll pardon the expression) to save them in the 4th quarter.   ISIS could be a moot point by the time the next President is sworn in, in 2017.

As for the San Bernandino attacks, I am not sure this is an "attack by ISIS" but rather two unhinged people with guns (the great American narrative) who tacked on an ISIS postscript to their attack as an afterthought.   They were radicalized against the West in general more than they were pro-ISIS.   And this radicalization is made much easier by calls for carpet-bombing of civilians and other hoo-ha nonsense..

Islamic radicals love Donald Trump.   They love his hateful rhetoric against Islam as well as Mexicans and other minorities.   He is living proof, in their minds, that American's talk about "freedom" and "equality" is all bullshit.   Donald Trump is the greatest recruiting tool ISIS has - along with the other GOP candidates eager to jump on the hate bandwagon.

It takes maturity to show restraint, and to realize that responding to provocation is not the way to win a battle, but the best way to lose the war.  Once the supply lines of ISIS are cut off (which should have been done long ago) and they lose more and more territory, the "Caliphate" will collapse with remarkable speed.  And by this time next year, hopefully, we will be wondering what all the fuss was about.