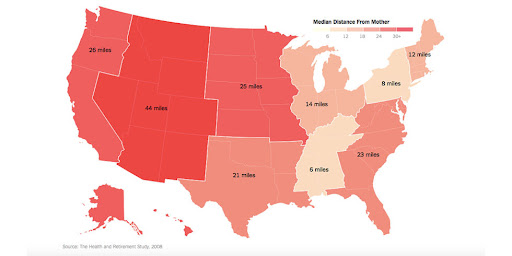 "The typical America lives only 18 miles from Mom" is a compelling headline.   But how was this data acquired?   From surveys, not from actual address data.


A recent clickbait article from - of all places - The New York Times, draws incorrect conclusions from a specious "survey" of older people.   This survey, however, draws broad conclusions from very limited data.  From the survey itself, this description of how the data is acquired.  And by the way, this survey, despite its governmental-sounding name, was actually done by the University of Michigan:


"Every 2 years, thousands of older Americans tell their stories. Quietly, compellingly, they answer questions about every aspect of their lives—how they are feeling, how they are faring financially, how they are interacting with family and others. They do this as participants in the U.S. Health and Retirement Study (HRS), one of the most innovative studies ever conducted to better understand the nature of health and well-being in later life.  The HRS’s purpose is to learn if individuals and families are preparing for the economic and health requirements of advancing age and the types of actions and interventions—at both the individual and societal levels—that can promote or threaten health and wealth in retirement. Now in its second decade, the HRS is the leading resource for data on the combined health and economic circumstances of Americans over age 50."

This folksy homespun description of their survey technique sounds intriguing.  And from this collected data, nice click-bait articles are generated, such as one recently claiming that "The typical American lives only 18 miles from Mom!"   You know it is click-bait, because they use the high-index word "Mom" instead of "parents."   It is like the stupid ads on Facebook that scream "Obama wants Moms to go back to school!" or "This one tiny trick invented by a Mom!"   It seems that Mom and Apple Pie still bring 'em in, in the United States, or at least Mom does.

But is it true that the "typical American" lives only 18 miles from their parents, or specifically, their Mom?   It may be, it may not be.  The way the data is collected and projected is, to me, suspect.

Surveys have one huge problem - they collect data only from people who want to take surveys or are willing to fill out long forms.   Most busy people hang up on survey calls, figuring they are some sort of scam.   More and more people are getting rid of land lines, and no one wants to answer survey questions, particularly long ones, on their cell phone.   Filling out and returning survey forms is a pain in the butt, and smart people have better things to do with their time.

So with any survey, there is a filtering effect.   You get results from the types of people who like to complete surveys, which creates a subset of the population that may or may not reflect what the "typical American" is all about.

People who complete surveys may tend to be bored, lonely, or have an aggravated sense of their own importance.  They may also be more trusting, older, and less skeptical.   This in turn, may tend to create a survey base of people who are, well, perhaps from a certain demographic - old middle-class and lower-middle-class people with a lot of time on their hands.

The survey methodology is not really disclosed in the report.  Vague statements about the number of people surveyed are made, and sometimes seem to be contradictory in nature:

"During each 2-year cycle of interviews, the HRS team surveys more than 20,000 people who represent the Nation’s diversity of economic conditions, racial and ethnic backgrounds, health, marital histories and family compositions, occupations and employment histories, living arrangements, and other aspects of life. Since 1992, more than 27,000 people have given 200,000 hours of interviews."

These "interviews" - are they on the phone or in-person?  In either case, you get people who are either stay-at-home types, or willing to spend a lot of time giving their opinions on things - both filtering agents.

So we are not getting a random sample of older people, but instead talking to the same people over and over again.   And out of a nation of 330 million people (give or take) is a sample of 0.006% of the population really telling us anything?

And speaking of death, who is interviewing the dead people?    To be more succinct, the survey interviews older Americans and asks them how far away their children live - presumably to discuss issues about support infrastructure for older Americans.   But the opposite isn't true - it is not surveying younger people and asking them how far away their parents live (as the title of the click-bait article implies).

And if we were asked, the answer would be "infinity" because our parents are dead.   So, how does that data factor into the "typical American" scenario?   Among Americans with living parents....the typical American lives X miles from their parents.   Given the age of the country, more than half of Americans have dead parents, however.

As I am one of the "over 50" people the survey represents, how would my data be factored into the "average" distance between me and my non-existent children?  Does that count as a "zero" or "infinity"?

Regardless of the flawed methodology of this study, they are not afraid to draw broad conclusions based on this specious survey data:

"The United States offers less government help for caregiving than many other rich countries. Instead, extended families are providing it, whether they never moved apart, or moved back closer when the need arose."

Ahhh... we get to the upshot - a little USA-bashing, which the "grey lady" is all-too-willing to wallow in.   A broad statement with ambiguous quantifiers ("less government help", "many other rich countries") is used to imply that our country is somehow inadequate.  But "less" government help than compared to what?  Mexico?  Who are the "other rich countries"?   Saudi Arabia?  We are not told.  However, it is clear that we are just such rotten bastards in the USA, letting old people die in the streets like Calcutta.

But the game is rigged.

However, you could draw other conclusions from this data.  Radically different conclusions, particularly if you've witnessed how older people live - and die.

For example, here on Retirement island, very few people live within 18 miles of their children, at least initially.  But if you read the obituaries, you see a lot of folks listed who no longer live on our island.  They get old, they get infirm, and they can no longer take care of themselves.   So they move into an assisted living center for the last few years of their lives.

Where is that going to be?   Near our retirement island?   No, not likely, because there isn't a good one around here.   Plus, all your friends aren't going to visit you in those last few years.   Moreover, they don't have legal authority or guardianship over your bank accounts or your person.

So, people move to where their kids are, in many instances, to an assisted living center, where costs are lower and the kids can visit and also manage their affairs.  So, toward the end of life, yes, they may live within 18 miles of their children.  This is not some weird anomoly.

The implication of the study, however, is that the "typical American" never moves more than 18 miles away from his parents.  And that is not supported by the evidence, in my opinion.

So what's the point of this?   After all, click-bait articles like this are just the fodder for water cooler talk at work the next day.  "Say Bill, did you know the typical American only lives 18 miles from his Mom?"  "No Bill, that's intriguing.   Tell me more while we slack-off from our jobs!"

What the authors of this study want to do is change public policy with this data.   And if the data is flawed, then we may be making public policy based on inaccurate information.

They also seem to be gleefully using this data to do a little USA-bashing as noted above.  The big, bad, old USA, not taking care of older people (even though we have the largest social safety net on the planet).

And the New York Times is happy to pile on with more class warfare, noting that poorer people tend to live closer to their parents, while college graduates tend to move away to find jobs (as if this were some earth-shattering revelation).   The big, bad old USA, once again, with its class divisions!

But of course, it is another case of confusing causation with correlation.   If stick around your hometown and live with or near your parents, odds are, you are never going to succeed in life or get ahead.   Why?  Because there are limited opportunities in your hometown.   You have to broaden your horizons if you want to succeed in life - and that means casting a nationwide net for job searches, not just a local one.

During the recession, I recall a plea online (I think it was CNN) from someone who was "unemployed" and lamented there were "no jobs" in their rust-belt hometown.   While everyone moaned about how bad the economy was, I noted that there were jobs available in other cities and towns.   "But then I'd have to move!" they cried - as if staying in a depressed area was an inalienable right, and that a job should be created just for them (no, people really think this way - go to a Bernie Sanders rally sometime and you'll see what I mean).

The Times article ends with a gloom-and-doom prediction that as more and more "Baby Boomers" retire, their children will move closer and closer (17 miles?  16?) to take care of them.   But I am not sure this is a valid conclusion at all.

Again, I see a lot of old people, and in most cases, their children are not changing their adult diapers.  The idea that younger people will have to become caregivers for their parents is a little more than flawed, particularly in a country with Social Security, Medicare, and Medicaid.   Even if a child is appointed guardian of a parent, this may extend only to legal and financial matters.  Chances are, Mom (or Dad) is in some care facility, where a paid employee is handling the chores of daily living.

This is not to say the opposite is never true, only that the sweeping conclusions and generalizations made in the Times article should at least be challenged.

You can't go broke selling bad news, or giving unconventional advice.   And alarming or unusual titles make for excellent click-bait.   And sadly, it seems these days that the New York Times and in particular, The Washington Post have jumped on the "modern journalism" bandwagon by generating these sort of "churnalism" articles with alarming headlines, just to get people to click.
Newer Post Older Post Home