The Lie of the Utah Miracle 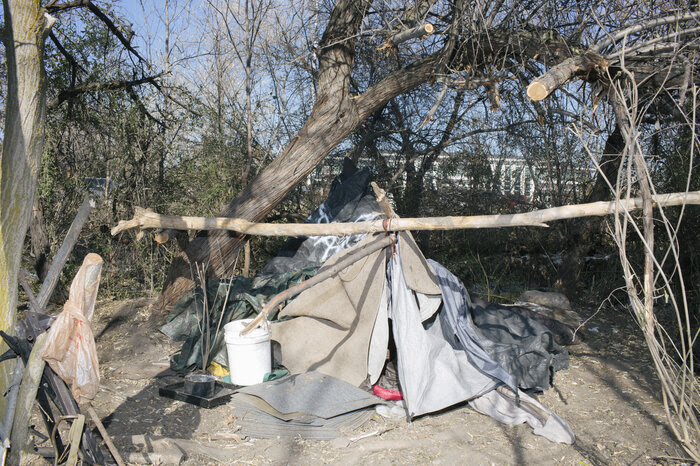 In the press recently, a story that warms the cockles of your heart.  Those thoughtful Mormons in Utah have reduced homelessness by 91%!   As the result of a decade-long effort, they have gotten 91% of the homeless off the streets and into permanent housing!   What a miracle!

Oh, wait a minute.   Maybe we need to dig a little deeper on this one.   After all, we are talking about Mormons, here.

And once again, we find that our friends at the bureau of specious statistics have cooked the books.  This time - as with the child homelessness data - claiming "success" by redefining what homelessness means.

As I noted in an earlier article, you can make alarming statistics seem real by changing the definitions of the underlying terms.   Child homelessness is an epidemic, we are told.  But we are not told (or told only in fine print) that they expand the definition of "homelessness" as any child living with relatives, in a hotel or motel room or in a trailer park.   To most people, this smacks of deception.   Living with your Grandma in her double-wide is not being "homeless".  And if living in a hotel is "homelessness" then the Kardashian sisters grew up homeless.

Or, if you want to scare people about sex, you can claim that 1-in-3 people have an STD, which is only true if you count things like HPV as an STD, when its actual effect on most people is negligible.   You might as well count the common cold as an STD.   Most people have it, right?   And they may have gotten it from someone they were "intimate" with - by shaking their hand!   Better wear rubber gloves!

If you actually read the article, these astounding statements jump out at you:

"In fact, Utah still has a substantial homeless problem. The overall homeless population is around 14,000.

The chronically homeless, on the other hand, are a subset of the homeless population that is often the most vulnerable. These are people who have been living on the streets for more than a year, or four times in the last three years, and who have a "disabling condition" — that includes serious mental illness, an addiction or a physical disability or illness.

By implementing a model known as Housing First, Utah has reduced that number from nearly 2,000 people in 2005, to fewer than 200 now."

Translation:  After ten years of hard work, Utah has managed to house 1800 people, but an astounding 14,000 are still homeless.    Rather than 91% of the homeless being housed, only 12% are.

Pretty amazing difference!   How did they jigger up these numbers to come up with 91%?   Simple.  They created a new class of homelessness called "the chronically homeless" and then arbitrarily decided that category (which has vague definitions) as comprising only 2000 people.   Over a decade, they found housing for 1800 of these folks, so they claim a 91% success rate for "chronically homeless" people.

And frankly, their definition would seem to undercount what "chronically homeless" means.   A vast majority of the homeless have mental health, drug, or alcohol problems, not a mere 15% or so.   By creating this arbitrary class of "chronically homeless" (which is based on what data?) they can declare a 91% victory.   Move people off the "chronic" list and it's as good as housing them!

Thus, the 14,000 remaining homeless (a whopping number compared to 1800) are just classified as "not chronically homeless" using the same vague criteria.  They are still living on the streets, however.  (Unless, of course, we are using the absurd criteria of trailer park residents as being homeless, as some government agencies do!).

The news media and the general public, of course, fail to recognize this little sleight-of-hand in re-defining the debate, and think, "Gee, those people in Utah have their shit together!  91% of the homeless are off the street!"   Which of course is not true.

This sort of chicanery illustrates how, if you can define the terms of the debate, you can control the debate.  And once you have your opponent agreeing to your definition of terms, they've already lost the argument.

So what's the harm in all of this?  Why would someone do this?  What does this have to do with a finance blog?   Well the harm is that people are very ill-informed as to what is going on in the world, because people skew statistics like this.   After reading this headline or hearing it on the news, you may be inclined to think that the homelessness problem is not all that difficult to solve.  After all, Utah has a 91% success rate, right?   Wrong, of course.  No more than McDonald's rapes 55 acres of rain forest for every Big Mac or that an alarming number of children are "homeless" in America.

Why do people skew statistics like this?   To make a point, to get ahead, to get advantage.   Why Utah is doing this is a good guess.  I am guessing that the people running this program wanted to come up with some click-bait eye-candy to justify the expenditures in their program.   And instead of saying, "after a decade, we've hardly made a dent in the homeless problem" - which would likely result in their budget getting cut or their program eliminated, it is easier to say, "We have a 91% success rate!" which certainly sounds better don't it?

And hey, the guy running the program certainly wants to justify his six-figure salary, right?  And you can't do that with a 12% success rate - over a decade.   Organizations tend to morph into self-preservation mode in a real hurry.

The real metric of Utah's success or failure in housing the homeless would be determined by what actual percentage of people were housed, and how that stacks up in relation to other States.   Sure, you could tweak this analysis by factoring in things like the size of the State, demographics, and the like.   But in the abstract, housing 1800 people really doesn't tell us much, does it?  How many does New York house?  How many in Texas?   How do these numbers compare based on the overall homeless populations in those States, or on a per-capital basis?

Maybe Utah wins the race.  Maybe it loses.  I suspect it comes out in the middle, otherwise they wouldn't have to cook the books as they did.

But what about this blog?   Well, as I harp on a lot here, act rationally in an irrational world.   Perceive the world the way it is, not the way you'd like it to be.   The more your perceptions are in line with reality (and there is a reality - don't believe the psychobabble about reality changing to meet your perception, that's crap) the more likely you are to succeed in life.

So how does one fight this constant smokescreen of fog that is blocking the truth?   I think the key is to be skeptical, particularly of alarming or fantastic claims.   When someone tells you something that sounds too-good-to-be-true (Utah has houses 91% of its homeless!) it probably is.   When someone tries to convince you of something based on fear, (terrorists are invading your local shopping mall!) chances are, that is likely to be untrue as well.
Newer Post Older Post Home