It's OK to be Mediocre - Embrace It! 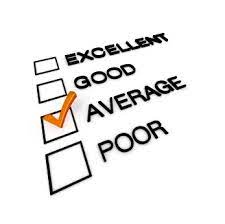 
The term "mediocre" has taken on a new meaning in America.  Since everyone's a winner and graded on the curve, and the team gives 110% all the time, just being average isn't good enough, or so they say.

But actually, most of us are average (as the term implies), and at least half of us would love to rise to even that level.   By its definition, mediocre means you are about halfway between the top and bottom.

And that's OK, really.   Because mediocre in the USA is living like a king everywhere else.  We are very lucky as a nation.

But some folks are never satisfied with being just average.   And everyone from high school teachers to Successories(TM) posters implore us to soar like eagles and dream no small dreams.  And yes it is good to aim high and seek perfection.   It is also good to accept - and appreciate - what you do accomplish when, half the time, you fail to reach these goals.

I am content to be average - to be mediocre.   I don't need to excel in every field of endeavor I try.  I like to ride my bicycle.  I am not Lance Armstrong (thank God!).  I like to make stupid YouTube videos.  I am not Martin Scorsese and never will be.  I like to tinker with cars. I am not Smokey Yunick.   I never will be, and that's OK.  I am in touch with my inner schmuck.

Trying to be above average is fine and all, but it can be an expensive proposition.  Having the coolest car at the car meet, or the fanciest motorcycle and the bike meet might seem like fun, but on the other hand, it costs a lot of time and money.  I am content to park in the back, look at all the expensive eye-candy, and just enjoy the moment instead of trying to be the center of attention.  And that's OK, too.

For every venue, there has to be an audience, and without an audience, there is no concert, play, or musical.   It is OK to be one of the crowd, sometimes.  Someone has to be.  In fact, trying to be more than that can distract from the experience.   Trying to be the "#1 Fan" isn't making it better, but worse. Being that asshole who videos a concert with their cell phone doesn't make it better.  Just sit back and relax and realize you are not the reason why everyone is here.

For most of us, life will have no special meaning. We won't change the world or make great discoveries or invent great things. We won't save the day. We won't do much, except work at some faceless, nameless job, until we keel over one day dead.  Once we are gone and everyone who knows us is gone, it will be like we never existed.

And that's OK, too.   Really.  Accepting that is a big part of enjoying the now and not getting caught up in would-a should-a's that can drive you mad.

We all can't be Superstars.  We all can't be President (although the GOP primary system seems to say otherwise).  And frankly, think about it.  Would you want to be President?   Like poor Obama?  Getting nothing done by a Congress that thwarts your every move?  Bush and Clinton didn't have it much easier.

And it is funny, though, when people go get famous, the one thing they miss is being able to just walk out in public, go to the store, and not have people fawn all over them.  Howard Hughes used to buy old beater cars with dented fenders and faded paint - and have his engineering staff rebuild the innards so they ran like new.  No one recognized him in these apparent jalopies. He built one for Katherine Hepburn, who enjoyed going to the market with a kerchief on, while people asked her, "Did anyone every tell you that you look just like....?"

How ironic - the superstar's greatest pleasure is to be just like one of us, once in a while. Consider yourself blessed.

When we are young, we think that maybe we'll do great things, or at least do better than we are doing at the time.  And over time, we do great things, or at least good ones.   But few of us become superstars. In fact, even if we become superstars in our chosen field, chances are, few outside our field even know we exist.  Do you know the name of the most famous radiologist in the country?   Neither do I!

Sadly, in this world of five-star ratings, anything less than a 4.9 is deemed horrific.   Unless Junior is on the honor roll, he might as well just drop out of school.   Grade creep and standards creep has paralyzed us into thinking we all have to be above-average, which of course, statistically is impossible to do.

Most of us have a talent in one area of our lives or another.  We might excel (or do better than average) in one or two areas in our lives.   The rest?  Average or below.   That's the norm.  Few of us are polymaths.

I am content to be average - to be mediocre.   I don't buy into the happy-talk from motivational speakers that we can all be "excellent" in everything we do.   That sort of talk just sets you up for failure from the get-go, as you will inevitably be disappointed in whatever it is you set out to achieve, as no matter how good you are, it never is good enough - by those standards.

But if you apply rational standards to your life and your accomplishments, well, you'll see you've done a lot in life.  And pretty darn well, too.