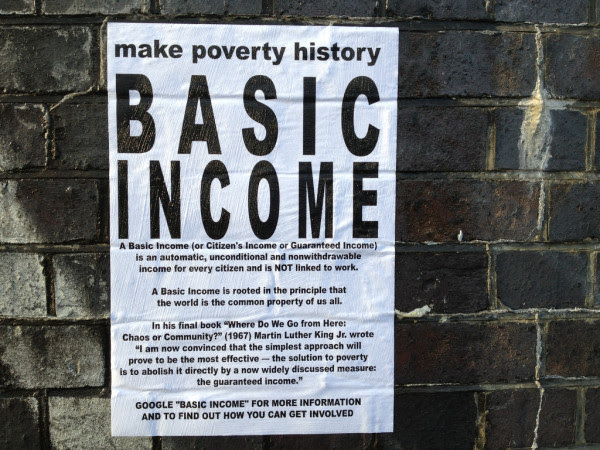 While it seems like a nice idea to "help everyone out" providing a "basic minimum income" won't help the very poor, and it will harm the middle-class and wealthy - and fuel inflation.

Finland is on track to try a radical new social scheme - scrap all existing welfare programs and just write a check to everyone for 800 Euros every month, regardless of need.

At first, this seems like a great socialist scheme.   Provide income for everyone, regardless of need, and thus eliminate the costs of administering a social welfare program.   There are, however, a number of problems with this scheme that even a child could point out.

To begin with, you can't live on 800 Euros a month in a Western country.   That's maybe $900 on a good day, and in the USA that would be near-starvation wages.    How one could pay for even food on 800 Euros a month is problematic - particularly in European countries with high food costs.   Clothing, shelter, transportation?   Difficult at best.

And how does this work if you have kids?   If you have eight kids, you can't support them on 800 Euros a months, no way.  Or does each child get 800 Euros as well?   If so, the smartest thing you can do is have as many children as possible - one of the unintended consequences of our welfare system in the US.

How does this work for retirees?  I suspect that under old retirement programs, most people would get more than 800 Euros a month (indeed, I stand to collect about $1500 a month, based on current projections).   So you plan your retirement based on this amount and are now told you are only getting 800 Euros?   I'd be plenty pissed off, if that were me.

Third, there is this weird concept of taking money away from you and then giving it back.  It just seems odd.  It changes the entire concept of welfare from a safety net to help the poor into a wealth-transfer scheme, where money is taken from the middle-class and rich, and then just given to the poor.   Of course, maybe that is the intent.

Fourth, this will fuel inflation in a big way.    When you just hand out money to everyone, money is worth less.  Not worthless, but worth less.   And we've seen this happen in a number of scenarios, including student loans, our housing crises, and so forth.   When you just print money, make it available on easy terms, or just hand it out, it fuels inflation.

So you hand out 800 Euros, and everyone has more cash, so they pay more for products as demand goes up and supply stays static.  Pretty soon, you need to hand out 900 Euros to stay even.  Then 1000, and so forth.  It could fuel an inflation spiral in short order.

Fifth, where is the incentive to work?   Granted, trying to live on 800 Euros a month is a challenge.  But for a homeless person, begging by a street corner, it is an 800 Euro windfall.   What is the incentive to get a job, or an education or to do anything?    For a young stoner, why bother leaving Mom and Dad's basement?  Just collect your 800 Euros and blow it all on weed.   So long as income is guaranteed, there is no motivation to contribute to society or to improve oneself.

Sixth, where is the incentive to excel?  If you invent a new product or start a new company in a society where money is just reapportioned, there is no reward for your labor, other than maybe some psychological reward of "success".   And while leftists like to trot out studies that show that we like to work for reasons other than money, the reason our brains are wired to want to work is a survival skill to stay alive.   We stop working, we stop earning.  As a society, if we stop working, our society dies.

Seventh, this provides an incentive to remain poor.   A friend of mine qualifies for Social Security.  However, since he is on Obamacare, he gets a subsidy for his premiums based on his income.  If he collects Social Security, he loses his subsidy.   He logically makes the decision to delay taking Social Security until he fully retires.   And a lot of people make these sort of decisions, every day.   Should I work more and push myself into a higher tax bracket?   Or should I just goof off more, make less money, but have more time to myself?  The net result is, an incentive not to work.

And I am living proof of that.  I could work a lot more and make a lot more money.  But since this would push me from the 15% bracket to the 25% bracket, the marginal increase in income, for every extra hour worked, is less.   So it makes more sense to work less, enjoy life more, and pay less taxes.

This "basic minimum income" idea takes this to extremes.   If you could structure your life, as I have, so your housing is paid for and you have little expenses, you could just take the minimum income check and live on that and be a burden to society instead of a contributor to it.  Or you could just work a small amount - enough to live comfortably, but below the level where you would be taxed any serious amount.

In other words, this system, while novel, will produce unintended consequences down the road.   But, as a social experiment, it will be interesting to see how this works out for Finland.   And perhaps before anyone jumps on the bandwagon, perhaps we should give it some time and see if it does work.

I strongly suspect that in five years, there will be a clamoring for additional social benefits to supplement this basic income as more and more people try to live on 800 Euros a month and then demand more.

Capitalism has a lot of flaws, in its purest form.   In a purely capitalistic society (which hasn't existed in the US for over 100 years) you are free to become as rich as you want, or to die in the streets of hunger.  Since the latter is not a desirable outcome, most Western countries that practice capitalism have adopted social welfare programs - a "safety net" - to keep people from completely falling off the map, and to offer a hand up the economic ladder, should they choose to take it.

Sadly, social welfare programs do get abused and some folks - there are a percentage in any population - would just assume work the system as opposed to work.

The ironic thing about all of this is that we are told, time and time again, by leftists, how the social welfare programs in Nordic countries like Sweden and Norway and Finland are the greatest thing since sliced bread.

Yet, the Finns seem to think otherwise - to the point there are going to toss out their entire social welfare system in favor of this "basic income" model.

Is there something the Finns aren't telling us?   That perhaps the socialist cradle-to-grave state isn't working out quite as planned?  Perhaps it isn't working at all?

Just a thought.   Because if Finland was a socialist paradise and an example of "what works" then they wouldn't be tossing the system in the trash heap to try something even more bizarre.

Maybe this isn't so much an advance as a tacit admission that socialism just doesn't work.
Newer Post Older Post Home