Or Is It Just Greed? 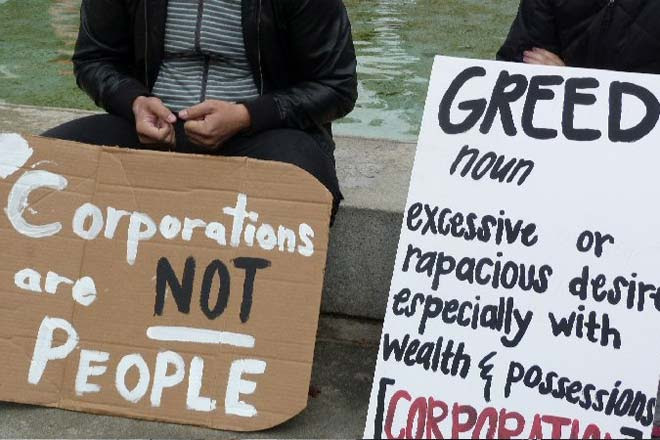 Are Liberals and Conservatives both motivated by greed?

Could it be that in the end we are all motivated by greed?   Or put another way, our own self-interest?

I thought about this the other day when I met a young man in his mid-20's and he was loudly proclaiming that we should switch to a Socialist State.   He had graduated from college and was chagrined to find that cushy, high-paying jobs were not for the asking for college graduates in Liberal Arts fields.

Moreover, like most of us at that age, he was paying almost half his income in rent and a big chunk in student loans.   He was effectively poorer (as most of us were) that he was when he was in college or high school.  It just wasn't fair.  Life suddenly sucked, it seemed, for no apparent reason.  Who took his money away?

What he was complaining about wasn't social justice for others but social justice for himself.   His list of demands was indeed, pretty self-centered:
In other words, he was for Socialism at age 25 because under that system he would make out like a bandit.   He was less concerned about helping others so much as helping himself - to other people's money.

And as the purported Churchill quote indicates, by the time he is 35, perhaps his priorities will change.   Working at a job and paying a mortgage, investing in the stock market with his 401(k) and having paid down his student loans, maybe his priorities will be don't rock the fucking boat here, I got a deal going!

Student loan forgiveness will seem less "fair" to him after making a decade of payments (and perhaps paying them off, as I did).   Rent control or housing subsidies might not be a big priority or seem "fair" as he now has a mortgage and an income that won't qualify him for subsidies.


And as for the evil corporations, well, he now owns stock in them through his 401(k) and wants the share price and dividends to go up, Up, UP!

Having to have competed for a job and worked his way up the ladder, he is less inclined to think that maybe some kid out of college should be "guaranteed" a spot.

And of course, paying taxes for over ten years, he is less inclined to think the government should be spending more.

In other words, self-interest, or greed, raises its ugly head once again.

The difference is, of course, that Liberals like to posit that they are the ones who are not greedy and are just thinking about the welfare of others.   But a lot of people protesting for things like "a living wage" stand to gain a lot if the minimum wage is increased to $15 an hour - as they are working at these shitty, minimum-wage jobs.

The guy who started out at a shitty minimum-wage job and had to work his way up the ladder to $20 an hour might think that paying unqualified people not a lot less than he's making is a shitty deal.   And of course, it will mean he will want more money, which in turn leads to wage inflation, which in turn leads to real inflation.  This in turn wipes out any real gains for the minimum wage earners - and wipes out the value of the older guy's savings.  It is a zero-sum game.

Conservatives are at least a little more honest about their self-interest and will tell you that everyone acts in their own self-interest despite what people say otherwise.   Many Liberals take a "holier than thou" approach to politics and rather than argue the merits of political positions, just castigate anyone who disagrees with them as "evil" which is not a logical argument, but an emotional one.

And my young friend, by age 35, will probably figure out that the slogans and emotional thinking of age 25 were indeed pretty stupid, which is another reason he will become more conservative.

But what about the so-called "Limousine Liberals?"   The rich folks - or the near-rich - who profess to want to "help the little people" by supporting certain causes and whatnot.   Aren't these folks acting for the good of humanity - and not in their own self-interest?

Maybe.  Maybe not.   People support politicians for a number of reasons.  And one is to influence the government.   Many business people donate money to both parties and both candidates in order to gain influence and hedge their bets.   If you are running a business, you want to make sure legislation doesn't pass that could negatively affect your company - or worse yet, regulations.

A client of mine from Texas was developing a paging system (back in the 1990's) and we wrote a Patent Application for him.   Then Bill Clinton was elected and he said to pull the plug on it.   I asked him why, as it appeared it might be allowed.   "Hell," he said, "I thought Bush would win!  I don't know any demmycrats!   How can I get my allocated frequencies from the FCC if I don't have any pull?"

He should have hedged his bets and supported both sides.  Hell, even Rupert Murdoch supported Hillary.

Others, such as Hollywood stars, well maybe they believe in these causes.   They also know that being a causista can help their "brand" in Hollywood - and with their fans.   Just as Jackson Brown would support Bernie Sanders (and know it would resonate with his fans) Ted Nugent knows that supporting someone like Donald Trump will resonate with his.

And of course, there are a lot of people - both Liberal and Conservative - who get caught up in "social issues" - the window-dressing that both sides use to corral supporters who logically would vote for the other side.

The redneck living in the trailer park is attracted to Trump because he will support their right to fly the rebel flag, keep his boy from getting gay-married (or turning Muslim) and prevent his daughter from getting an abortion.   Never mind that Democrats are more likely to preserve his job rights and provide him with subsidies for housing, food, and child care - as well as raise his wages.   He votes against self-interest only because he perceives social issues as his self-interest.  And conservatives convince him that social welfare programs will only benefit others (read: blacks) and thus cutting off these programs (and lowering taxes for the wealthy, so benefits and jobs will "trickle down") is actually in his own self-interest.   He is still acting in his own self-interest, at least as he perceives it.

The wealthy liberal, whose financial interests might be served better with lower taxes, less spending, and fewer social welfare programs, actually votes the opposite, again based largely on social issues.   They want to support gay rights, rights for minorities and women, and abortion.   And the Left has done a good job of convincing them that these things are in their self-interest, and that social economic programs are also in their self-interest.  It is only when the bill comes due (as it has with Obamacare) that some might question this logic.

So what's the point of all of this?   Only that we are all human and act in what we perceive to be in our own self-interest.   The young protester who wants a lot of free shit from the government isn't being altruistic, but indeed, selfish.  He's racked up a mountain of debt and wants it all forgiven - plus a raise doubling his salary and a guaranteed job for an art history major.  In a few years, once he's invested in the system, his attitudes will change.  Like clockwork.

Of course, some older folks still cling to liberal values.  Not surprisingly, they are poor and tend to be suckling off the government teat - or would like to.  And by the time they reach retirement age, many old people, particularly those dependent on Social Security and Medicare will tend to veer Leftward once again.   Funny how that works.

It is predictable as the sun rising in the East.   We all act in our own (perceived) self-interest.

Just get over it and stop pretending otherwise.  Because the holier-than-thou crap is getting old.