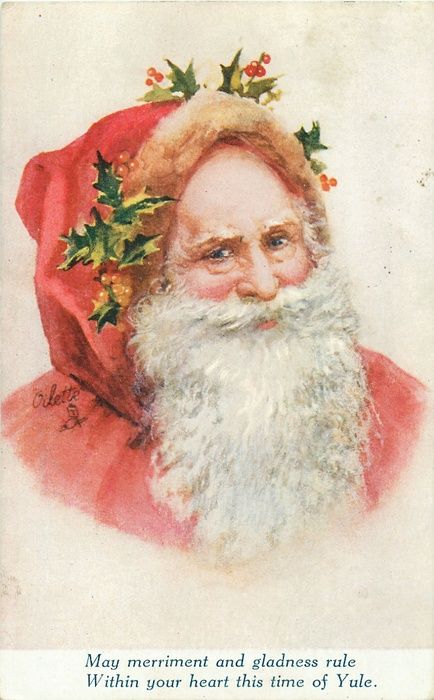 The term "Merry" is rather archaic.

Every Christmas season we say "Merry Christmas" without really thinking about what "Merry" really means.  It is more of an 19th Century word, back when people, when they were happy, were deemed "Merry and Gay" - which has sort of taken on a different meaning today.

People don't say "Merry" anymore.  Two young stoners, for example, won't say something like, "Dude, I scored a bag of kush, come on over and let's get merry!" to which the other might reply, "I invited some babes over and there will be merriment for sure!"

Perhaps it is the attachment to "Christmas" that has removed "Merry" from our common vocabulary  Other than "Eat, Drink, and Be Merry!" the adjective seems to have attached to "Christmas" like Velcro® and fallen from common usage.

Most folks don't say "Happy Christmas" other than the British.   For some reason, Christmas should be Merry and not Happy.   Happy sounds too casual, like laughing at a joke, and Merry sounds more solemn, I guess.

But shouldn't Christmas be a solemn celebration of OurLordAndSavior® Jesus Christ's birth?  I mean, this is a major religious holiday.  It shouldn't be Merry, it should be stone cold.  The Muslims don't fall for this "Merry" nonsense - their religious holidays are serious - you have to starve yourself!

Today, it seems, we have fewer adjectives for "Happy" other than "Happy", "Very Happy", "Very, Very, Happy", and "Orgasmic."   People are no longer Merry, Jolly, or Gay.  And don't get me started on Blithe.  Or Convivial for that matter.

Could it be that our vocabulary is shrinking?   It seems a possibility in this day and age of texting and multiculturalism.   For people who are speaking English as a second language, the nuances of the various stages of "Happy" seem unimportant.   You have "Happy" and then the multiplicative modifier of "Very".

Maybe we can go to the metric system and rationalize this.   There is Happy (1x) and then Very Happy (Happy 2x) or if you are orgasmic, maybe 10K Happy.  Merry would fall along the lines of 5x Happy + 1x Solemn.  If we could quantify this, we could eliminate all those messy adjectives.

"Distrust adjectives" as Hemingway used to say.  Maybe he started all of this. 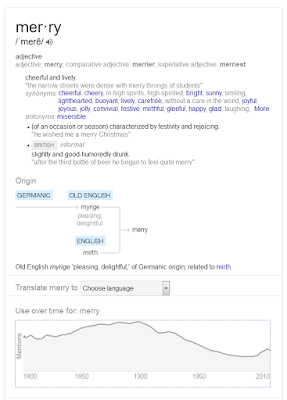 It is interesting how the usage of "Merry" has declined over the years, until Fox News declared "War On Christmas."  Click to enlarge.
Newer Post Older Post Home