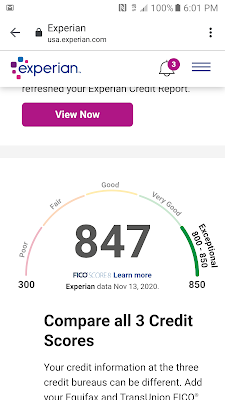 Credit Scores are all over the map!

I received another e-mail, this time from Experion, telling me my credit score went down.  In a previous posting, I noted that my Credit Score with Experion was listed as a "perfect" 850.  This time around, they have dinged me three points down to 847, presumably because I had a small balance at the end of a reporting period.  Dang!  That sweet lease deal on a new Acura is now out of reach!

What I learned was that among "Fair Issac" credit scores, there are at least a half-dozen different scoring methods, and the score I received was a"FICO-9" which scores slightly differently that other FICO scores

The very next day, Credit Karma sends me an e-mail telling me my scores have dropped to 801 on Transunion and 814 on Equifax.  As I noted in another posting, these numbers didn't even agree with the direct quote I got from Transunion!  What the heck is going on? 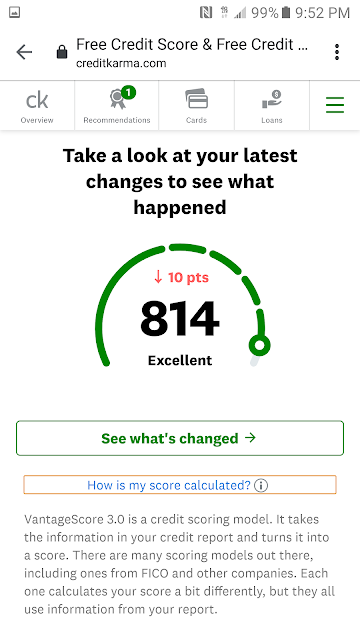 Credit Karma has their own score - you have to read the fine print.

But there are other scores out there that are not FICO "Fair Issac" scores, but are reported anyway.  A reader tried to educate me about this years ago, but I didn't "get it" until now.  When I clicked on the "how are scores calculated?" on the Credit Karma site, I got this notation:

"VantageScore 3.0 is a credit scoring model. It takes the information in your credit report and turns it into a score. There are many scoring models out there, including ones from FICO and other companies. Each one calculates your score a bit differently, but they all use information from your report."

In other words, Credit Karma isn't reporting Transunion and Equifax scores, but rather a score of their own, that is generated from Transunion and Equifax credit report data.  They don't quite outright lie and claim it is a FICO score, but they sort of imply it, by putting the scores under the names "Transuion"and "Equifax" and you have to click on the link to read that they are not actually official scores. 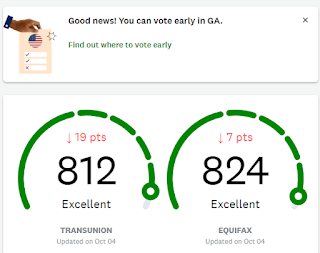 This graphic seems to imply these are "offical" scores from Transunion and Equifax.  You have to click on the individual score to get to another page and then click on a link there, to see that it is actually a "VantageScore" not the FICO score normally reported.

What's interesting is that it seems Credit Karma is under-scoring compared to Fair Issac - leading people to believe, perhaps, that they are not as qualified as they could be for some credit offers.  For me, it makes no difference if I am at 801, 814, 847, or 850 (all four being scores reported this week for me) as they would provide the same level of qualification - based also, of course, on verified income, which I don't have.

But if you are at the border of 770 - which isn't that far away from where I am now - you may qualify for those spectacular 0% financing deals or not.   There are cutoffs, and a few points on the score could make the difference between qualifying and not.

And by the way, the reason all of these credit reporting agencies, Credit Karma, and my banks are sending me these e-mails with credit score information, is as a lead-in to selling me credit card offers.  Nothing ever good comes from an unsolicited e-mail, to be sure!

But all that being said, it is never a good idea to obsess about credit scores or qualifying for credit - unless you are applying for a home mortgage, in which case, you should check your credit report and clean up any issues you may have - such as an unpaid phone bill Mr. See had from college that was dinging our score and qualification.   No need to spend money on a bogus "credit repair" scam - a simple phone call and a check solved the problem.

On the other hand, if you don't qualify for a loan - or a special deal - then maybe it is time to re-think your finances.  Year ago, I went to my banker - a friend of mine who was a VP at a bank I owned founding stock in, and he said I didn't qualify for a loan I wanted to take out.  He was apologetic and all, and I thanked him.  I told him, "When my banker says to stop borrowing money, I should listen!"

Similarly, when you are "turned down" for a loan or your credit score is in the tank (or both) you should listen to what is being said.  And what is being said is that you are a poor credit risk because you have a higher likelihood of not being able to pay back the loan.  And the lower down the scale you go, the higher this likelihood is.  When you reach the point of trying to find co-signers on a loan, well, that is a 100% likelihood you will default on payments and the poor co-signer will end up holding the bag, which is why no one should ever, ever co-sign a loan.

I only wished I knew all this 20, 30, or 40 years ago, when the information would have done me some good.  At this point in my life, I have a "perfect" (or near-perfect, depending on the day of the week) credit score and no use for it whatsoever.   Back in the day, I had no idea how this all worked.  And like most young people, I felt "lucky" to be able to get a loan, when in fact, a loan is a burden, not a joy (ask any college graduate about their new friend Sallie Mae).  Loans have to be paid back, with interest.

And for all of you hoping for "loan forgiveness" keep hoping.   Recent articles about how Biden is going to forgive $50,000 in student loans fail to mention this is only a limited program for people willing to work a decade or longer in public service.   Fifty grand is what the average American makes in a year.  I have some young friends who are doing this to try to duck out on law school loans - working as underpaid public defenders in order to duck out on fifty grand.   It would be a lot easier to just work for some law firm for a few years, I think.  But that's just me - and how I paid back my student loans.

My only regrets in life - and I have few - involve borrowing money.  I borrowed money for stupid things like home improvements, paying off credit card debt, cars, RVs, and whatnot.  I stopped doing that, more than a decade ago, when I realized that borrowed money was a lot easier to spend than money in the bank.  It was all-too-easy to think of a purchase in terms of monthly payment and not overall cost.

Maybe someone out there will learn from my mistakes.  I doubt it, though.

The smart debts I don't regret - buying investment properties, and student loans which obtained an education that qualified me to keep a high-paying job I already had.   But car loans?  Consumer debt?  Credit Card debt?  Dumb, Dumber, and Dumbest!

Yet so many think otherwise.  They salivate at the thought of a "perfect" credit score and all the bling it would entitle them to buy - not thinking that that bling has to be paid for, over time, with interest.

A loan is not a gift!