Who the Hell Is Jo Jorgensen? (Spoiler Alert!) 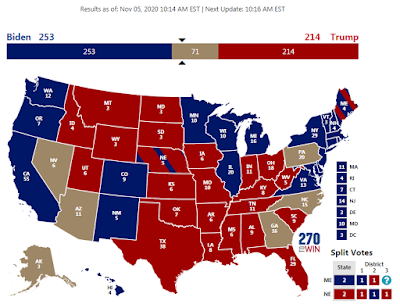 Trump didn't lose the election to Joe Biden or nefarious vote counting. He lost it to a 3rd party candidate, just as Al Gore did in 2000.  This is the electoral map this morning.

The electoral map looks close.  If Biden can win Nevada and Arizona, he gets 270 - and doesn't need Pennsylvania.  Meanwhile, Trump is contesting the vote in Michigan, with 99% of the vote in, and Biden a clear winner.   What a waste of resources!

What is interesting about the results is that a "Libertarian" candidate, Jo Jorgensen, took about 1.2% of the vote in almost every State - and other "spoilers" took fractions of the vote as well.  Most of these "spoilers" this time around were on the right-hand side of the political spectrum.  If those votes had gone to Trump, we would be right now declaring Trump the clear winner.

Libertarians - you know them - like the Libertarian Twins, Ron and Rand Paul, who in their spare time, flip houses.  They claim to be part of some Libertarian party, but they vote Republican 99% of the time.  It is like Susan Collins being "independent", or John McCain, a "maverick" - but really just labels they use to try to persuade the voters they aren't really all that bad - but they are just ordinary Republicans, much as Bernie Sanders is just a leftist Democrat, despite his "independent" label.

Spoiler candidates usually end up handing the election to the opposition.  Ross Perot elected Bill Clinton. Ralph Nader elected George W. Bush.  And John Anderson certainly didn't help Jimmy Carter's re-election prospects. The granddaddy of them all was Teddy Roosevelt, who left the GOP and formed the "Bull Moose Party" which went nowhere, other than to elect Woodrow Wilson.

Political maturity means selecting the candidate who best aligns with your views and interests - from one of the two major parties. Yea, I know, "the two-party system sucks!" and in Europe, they have Parliamentary Democracy, with dozens of parties to choose from!   But this ain't Europe, buddy, so just get over that.

Besides, have you seen how that plays out?  Sometimes no one party has enough votes to form a government, so unholy alliances have to be made - rightists aligning with leftists, extremists getting a voice they otherwise would never have had.  Yea, sure, sometimes it works out great, but other times, it can be a disaster of Trumpian proportions.  Take Brexit, for example...

We're stuck with what we got, anyway, unless you want to overthrow the government or rewrite the Constitution - and both are long-shot propositions and both would end badly for most citizens.  Besides, if you work with the system you've got, sometimes it works out OK.  Not optimal, but OK - which is about all you can expect from any government. 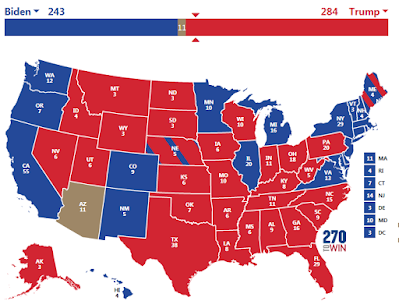 This is what the electoral map would look like if all the votes for Jorgensen went to Trump.  Any questions?  Thank you very much, Ms. Jorgensen - you've saved Democracy from itself!