Your Mileage May Vary 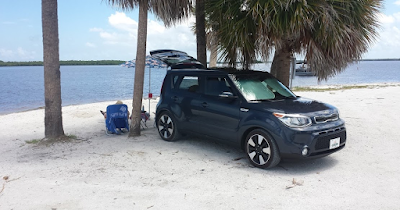 Gas mileage depends in large part on your driving habits.

A few years back, a lady sued Honda because her hybrid car wasn't getting the 45 miles-per-gallon that they claimed it would get.   I thought the suit was frivolous, as gas mileage depends a lot on the driver, as well as the car.  It isn't hard to get 10 mpg in a Honda Hybrid - just leave the parking brake on.

But seriously, as I noted in an earlier posting, hybrids use regenerative braking to recapture energy and recharge the batteries.  If you floor it to a red light and then jam on the brakes, well the service (friction) brakes kick in, and all that energy is wasted as heat (and worn brake pads).  To get the best mileage in a hybrid - or any car - you have to drive conservatively.

What drove this home to me was a trip yesterday to Jacksonville in the hamster.  I drove down, and Mark drove back.  On the way down, on the highway, I was getting an astounding 36 miles per gallon.  On the way back, Mark was getting 32.   Not only that, but regularly I note that when I drive around town, I am getting over 30, while Mark hardly breaks the 27 barrier.  What is going on?

Driving habits come into play.  And maybe why I get better mileage is that when I am driving, I am thinking about the engine and transmission and what they are doing, while most people press on the "GO" pedal to go, and the "STOP" pedal to stop.

The hamster has one annoying habit.  At about 55 mph or so, if you go over a bridge at an interchange, it will downshift from 6th to 4th and rev the engine.  This wastes a lot of gas.  I put the transmission in manual mode when I hit these interchanges, to hold it in 6th gear, which is more than adequate to climb this mild hill.  Presumably, KIA has fixed this problem in newer cars.   At higher speeds on the Interstate, it is less of a problem, however.

I also try to anticipate stops and coast to them, as opposed to jamming on the brakes at the last minute. If you are coming to a red light, you don't get through it any faster by slamming on the brakes at the last minute and then sitting there for a minute or two, smelling your burnt brake pads cool down.   The same is true for stop signs - when there is traffic coming the other way.

Yet many people do the opposite - and get upset when you don't floor it all the way to what is clearly a red light.  Sadly, most drivers barely look more than 20 feet beyond the hood of their car - which is why they get into wrecks a lot.   I know a lot of people whose driving technique is to look along the center of the hood (or in the old days, through the hood ornament) at the "fog line" to make sure they are correctly positioned in the lane.  Since they are looking more than a few feet ahead of their car - even at freeway speeds - they are constantly surprised by other traffic, pedestrians, broken-down cars, and other changes in the traffic flow.

It is a shitty way to drive, but a lot of people do it - and it ain't hard to figure out who.  When you see someone driving along and then failing to react to some road condition until it is right upon them, you know they are not looking very far down the road.  You should be looking further down the road than your reaction time and stopping distance time - not at the fog line.

It is like how you can tell if someone is texting by the way they drift out of their lane - it ain't hard to do.  And it is a lot worse these days since most new cars don't have much in the way of toe-in (to reduce rolling resistance) and thus tend to wander more.

It is not that Mr. See has bad driving habits, only that he doesn't think about what the engine and transmission are doing when he is getting to where he wants to get.  We both drove at the same speed (under the limit) but he would tend to "goose" the throttle more and used the cruise control less.  This resulted in a difference of several miles per gallon, though.

At highway speeds, the main load on the engine is wind resistance, along with any hills you have to climb.  You can't eliminate hills, of course, other than to climb them in the right gear (again, the pesky and unnecessary downshift on the hamster).  But wind resistance increases exponentially with speed. The energy needed to go 70 miles an hour is far more than, say, 60-65.   The hamster will easily beat 30 mpg all day long on a level road at 62 mph.  It will drop into the mid-20's at 70-75 mph.

Funny thing is, on the way to Florida, the same cars passed us several times en route.   And in heavy traffic, we ended up passing some who zoomed by us early clearly exceeding the speed limit.  We both got to the same destination at the same time, but one of us burned several bucks worth of gas more than the other - not to mention the wear and tear on the vehicle.