Is Trump Planning a Coup? 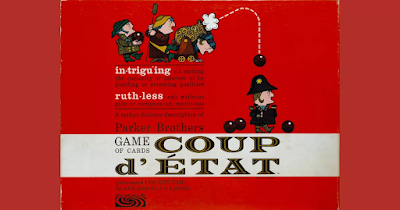 Recent moves by the Trump Administration are more than a little disturbing.

Donald Trump shows no signs of conceding the election, and in fact is acting as though he's been reelected for another four years. He's proceeding on with his budget plans for the next year and has denied the Biden campaign any assistance in the transition.

Of course, he's been priming the pump for months now claiming that mail-in voting is fraudulent and that massive fraud occurred not only in the 2016 election but would in the 2020 election as well. He's been disparaging our electoral system for some time now, and it seems part of an overall plan.
Meanwhile, his minions have spread even more wacky conspiracy theories about how the election was fraudulent - stories about secret supercomputers that don't exist - spread by a guy with a history of lying.  It doesn't matter that they are ridiculous - his followers believe in Qanon - you can sell them anything at all.
He's successfully convinced his followers that democracy simply doesn't work and that our election system is fatally flawed. This sets the stage for possible further action besides the many fruitless legal appeals.
What is really disturbing is that he has cleaned house at the Pentagon, firing almost every civilian appointed leader and replacing them with Trump loyalists. He's also pressed in the past to invoke the Insurrection Act and send US troops into America's cities to quell disorder. In the past, leaders in the Pentagon have thwarted his plans to invoke the Insurrection act. Those leaders are now history.
The Press is reporting that Trump is going to let the legal appeals play out for another week and then concede the election, being pressured to do so by his son-in-law Jared Kushner. We can certainly hope that this is the case, but I can see another scenario playing out as well. And perhaps the Kushner story was intentionally spread to calm any nervous Democrats.
He will drag out the legal appeals long as possible, much is the Bush people did with the Gore election fiasco. But at the last minute, he would declare the entire system to be broken and corrupt and invoke the Insurrection Act and have troops stationed in all major cities to quell any riots or disturbances, of which there will be many, once Trump declares himself to be re-elected (or dictator-for-life) and refuse to leave office.
He will have his enemies arrested including Hillary, and actually "lock her up" - and declare martial law, suspend habeas corpus (Hey, it worked for Lincoln!). Within a week, he could knock down any opposition, entirely.  And since the borders are closed due to CoVid, there is no escape to Canada.
Whether the US military would go along with this remains to be seen. Many fundamentalist right-wingers, neo-nazis, and fundamentalist Christians have been infiltrating the military over the years. It is possible they may have enough people in leadership positions to go along with this coup d'etat.
Not only that, but the far-right is well-armed today.  There are more guns on the street than ever before, and much of these are military-grade assault weapons.  It isn't a matter of owning a deer rifle or a squirrel gun, or .38 pistol for "home defense".  These are folks with arsenals of weapons and tens of thousands of rounds of ammunition.  Folks who are already calling themselves a "militia" and already making noises about taking over America.  All they need is a trigger.
I certainly hope this isn't the case. However every day there seems to be more ominous signs that something is up, and people don't seem to be thinking about the potential outcome.
And sadly, not enough Republicans are coming forward and encouraging the president to concede the election, for fear of antagonizing him further or antagonizing his voter base.
UPDATE:  Yes, technically a coup d'etat is a strike or blow against the head of State.  What Trump might be trying to do is strike against Democracy itself.
Some folks, particularly on the Right, say talks of a coup are alarmist.  But such a coup would occur very quickly, and filing legal appeals would have little effect against armed men.  It you look at what is going on, it could be just nothing - or pieces of a puzzle being carefully laid in place.
1.  Establish the justification - the election is corrupt, the system is flawed, the election was stolen.
2,  Create an emergency - Proud Bois (an oddly gay term, btw) posing as "antifa" start riots - providing a justification for the Insurrection Act (which was last invoked in 1992 - it's been done before!).   Sounds farfetched?  We already have concrete evidence of right-wing people posing as left-wing rioters, such as the infamous black umbrella man.  He's one of the few that were caught.
Not enough of an emergency?  Then declare a war.  Drop a few nukes somewhere and people won't pay too much attention to the coup.
3.  Suppress dissent - round up the opposition, or at least the most vocal leaders.   Jailing a few hundred or a few thousand leaders could delay any real opposition to a grab for power.
4.  Consolidate Power - Once you have firm control over the levers of government, you start lining people up against the wall.  This eliminates your opposition and cows any others who might think about dissent.
Far-fetced?   Let's hope so!   But it has been done in the past - many times - in history.
Just not in America - yet.  Why we think we are immune, I do not know.
P.S. - I used to play the board game shown above, as a kid.
Newer Post Older Post Home