Things are Not Forever! 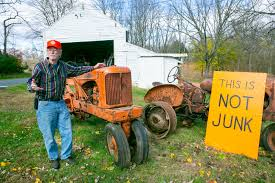 Possessions are Slavery!  And yes, that is junk.

Returning from four months on the road, there is a lot of work to do around the house.   Mildew and algae form on the soffits and have to be pressure-washed.  Trees, shrubs, and other plants have overgrown and need to be trimmed - I made a pile of trimmings the size of a minivan, at the end of our driveway, within a day or so.   It is a lot of hard work.

Yes, you can pay someone to do this for you - while you sit around doing nothing or working at job - to pay someone to do a job for you.  The latter makes no sense to me, unless you can make a lot of money in a short period of time, which I can no longer do.  Even then, it is a better idea to do these chores yourself, if you can do them, as opposed to watching television or surfing the Internet.

When you buy your first house, it is all exciting.  You get to mow your own lawn!  You forget - momentarily - how dreary a task that was as a kid and how you hated doing it.  It takes a few months before you remember how much it sucked.  You start to want less lawn in your life.  A nice small lawn, easy to take care of, weed, and make look nice.  Like that above your gravesite.

But it goes beyond that. Over time, you accumulate possessions, and a lot of it is junk or stuff that wears out.   You hang on to it because it cost you a lot of money at one time or another, so out of pride, you don't throw things away.   Pretty soon, you are surrounded  by a sea of junk.

A friend of ours - a client of Mark's - had a house fire that destroyed nearly everything they owned.  The insurance company wrote them a nice check, and they bought a brand-new town house from Mark, and bought new furnishings.  What was nice was everything was new, and they didn't have to replace the things they had grown weary of.  The house fire forced them to "clean house" to so speak.  Of course, that only lasts 10-15 years, before the new house is worn, needs new appliances, and all the "stuff" you bought is worn and weary.

We have other friends who are "thinking" of retiring.  Well, they are retired, but they cannot give up on a mountain of possessions and settle down and enjoy retirement.  You talk to them and they are weary and worn down by things, the maintenance and organization of which occupies a substantial amount of time.   They want to move on and move out, but parting with "things" is in the way.  This is a particular problem for some couples, as the husband doesn't want to get rid of his "collector car" (which is actually a pretty pedestrian model, worth little) and the wife doesn't want to get rid of her "precious collectibles" (from the Franklin Mint!  Again, worth nothing).  They are paralyzed by things - to the point where their life becomes little more than surrounding themselves with things instead of doing things.

Perhaps we are weird.  We lived in Washington Road for a little under 20 years.  When we had the chance to sell it all and let someone bulldoze the house, we did.   We had been talking about moving on for some time, so when the time was right - we moved on.  The same is true with our place in New York and our condos in Pompano.    You get the "been there, done that!" feeling pretty quickly.  The New York property, in particular, was a staggering amount of work (five acres of lawn to mow!) and I started feeling a slave to the property early on.  (We tried to hire someone to mow it - no takers!).

I suspect in a few years, we may end up downsizing to something simpler to take care of - a smaller house on a smaller lot, with less "stuff" that needs to be cleaned and maintained.  The only question is, where is that place.    When the time is right, though, we will make the move.  And we'll have a garage sale to end all garage sales - and be free of "stuff" once again..... at least for a while.