Knowing When To Walk Away 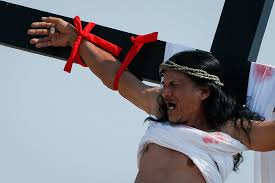 Some folks like to nail themselves to the cross.

I wrote before how a person can squander their lives trying to "fix" other people, or make themselves miserable by hanging out with mentally ill people.  People try to "fix" a hoarding relative by cleaning out their house, only to find it filled to the rafters with junk, by the time they get back from the dump.  Hoarders are evil people - just walk away from them.

Reddit recently made headlines by banning its Qanon subreddit, which probably will have little effect. They banned "the_donald" but let r/DonaldTrump stick around - same shit, different subreddit.  Instead of subreddits spreading Qanon conspiracy lies, they have Qanon "recovery" subreddits where people go online and complain about relatives and loved ones who got sucked into the Qanon bullshit.

It reminded me a LOT of the "children of narcissists" subreddit, or any of the many sites for ex-scientologists and whatnot.  These are people who are spending a lot of their time - their lives - trying to fix other people, or obsessing about how they were snookered into a bad deal.

One lady was complaining that her fiancee was sucked into the Qanon rabbit-hole.  Everyone was sympathetic and talked about how to "cure" him of this malady (good luck with that - if you try to challenge someone's belief systems, you are basically attacking them, or so they feel).  No one bothered to mention the obvious - that maybe this was a blessing-in-disguise, as he was only her fiancee and not her husband or father of her children - yet.  Hey, maybe there are other men out there who are not insane - maybe try marrying one of them, instead?  Nah!

Others, like in the "Children of Narcissists" site, were adult children living with their parents. The parents watched Fox news all day long and visited Qanon websites. These "kids" try to argue with their parents and end up creating a toxic environment.  The idea of moving out of their parents' house is alien to them.

If you have friends who believe in Qanon or are otherwise mentally ill, don't try to "fix" them.  Just walk away, slowly.   Slowly - no need to make dramatic pronouncements that you are "cutting them our of your life forever" or whatnot.  Just see less and less of them until you see none of them.  If they somehow pull back from the brink of Qanon, the door is always open, but don't get your hopes up.  Crazy runs deep.

You see, people who get sucked into crap like that get sucked into other crap. Some have noted that Qanon "supporters" are often also anti-vaxxers, or "new age" people who believe in notions and potions, balms and ointments, "essential oils" and chankras and whatnot.   Even as they pull away from Qanon (and they will - these things are like evangelical churches - everyone leaves, eventually), they will latch on to something else - Scientology, or some guru, or some evangelical church even, or perhaps an MLM scheme.  In fact, I predict they will contact you for that very purpose - to apologize for being a dick about Qanon, but hey, have you heard about The Money Tree System?  Sign up now!

There are people out there who are just followers, period.  They lack an internal compass or sense of direction, so they follow the first person who comes along who sounds like he (or she) knows what they are talking about.  And perhaps society needs a lot of people like this - blind followers who latch onto causes that are not their own, and often to their own detriment - but to the advantage of others.

That's sort of the funny thing about it.  The followers of Qanon and other conspiracy theories destroy their own lives in the process.  Following a conspiracy theory never profits one personally (you have to be leading the conspiracy, selling the chumps books and seminars to make money at it). Yet the conspiracy theorist calls the folks who work for a living and save their money and accumulate wealth, "sheeple".  Like I said before, if you want to get ahead in life, just become one of the Illuminati.  It's simple - just "buy in" to the "myth" that hard work and thrift will get you ahead in the world.   Well, it worked for me, anyway.

But you can't fix stupid, as they say, and as I say, if you see someone about to drive their car off a cliff, first make sure you are not in the back seat when they do!  Too many people try to "save" others and end up only destroying themselves in the process.   What is the profit in that?  You can't save the other person - he thinks he knows what he is doing.   You only create a second victim - you.

That is the problem right there.  We all like to think we know what is best for ourselves.  We don't want outside intervention in our lives - and in fact, strongly resent it.  So if someone comes along and says they know what is best for you, odds are, you are going to reject their advice.   And most of the time, these do-gooders don't even have their own shit together.

"Oh, but that's selfish!" they say.  But it is not.  When you try to "help" someone and destroy yourself in the process, you are not being selfless, but creating an additional victim for society to support.   Your first duty in life is to support and take care of yourself - this is not "selfish", is it your obligation to the rest of society, the rest of us.  You are doing me a big favor by not going on welfare.  You are doing me a big favor by being a contributing member to society and not a drag on it. You see how this works?   It is a win-win situation for all of us.  You get a job and you pay taxes - and we're all happy.

Jesus said the poor will always be among us.   There will always be people sucked into scams and cons and whatnot, and there isn't much we can do about it.  You can try to throw a drowning man a life-ring, but if he throws it back at you and tries to sell you on the idea that drowning is fun, what do you do?  Suppose he rejects your life-ring because the color clashes with his bathing suit?   Maybe you can walk away and say you did what you could.  Risking your life to swim out and save him is a bad idea.  Drowning people, as we learned in Red Cross lifesaving, tend to drown their rescuers as well.

Today is Thanksgiving.   A lot of people go to visit relatives today and eat turkey.  Many dread this, as their relatives may be quite insane and blather on about conspiracy theories or what was on Fox News or whatnot.  What on earth to do?   Well, this year, the Corona Virus gives you the perfect excuse to just not go, or if you go, to limit contact with toxic relatives - who maybe literally toxic this year.

If you are still in college or a minor, well, it gets a little trickier - you may not have as many choices, or so it would appear.   You can, however, always choose not to engage people when they try to trigger you (and they will - conspiracy theory people are all passive-aggressive).   When Dad blathers on about how the Illuminati are stealing the election for Donald Trump or whatever, you can just keep quiet and go off and do something else.   Getting into an argument with people rarely results in anything construction happening - you are not going to convince them you are "right" and vice-versa.

Remaining sober is probably a good idea around people like that - it allows you to more rationally assess the situation and skedaddle when it gets toxic.  Just keep in mind the prize - eventually you will leave home and have a life of your own and not have to deal with these people ever again, unless you choose to.  When it is a choice, it is much better - and you can choose to do other things with your holiday time, as I noted before.

Don't be like my late sister - who wanted to use her precious vacation time to stage an "intervention" (read: revenge) for Mother.   Not only is this a strange idea as to what constitutes a vacation, it is an utter waste of time.   Even as far gone as she was, she had this crazy idea that what she was doing with her life was right for her.   And she was right about that.   What is really sad about that whole situation was that my sister had a short life, and spent much of it in futile endeavors like that - trying to "fix" others.   Maybe it is a way of drowning out the deafening silence, I guess.

Have a Happy Thanksgiving.  Be kind to yourself.