Will Obamacare be Found Unconstitutional? 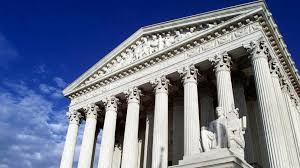 One man's judicial activism is another man's "strict interpretation".

The Supreme Court heard arguments today whether Obamacare should be held to be unconstitutional.  It is kind of funny that people on the Right, who decry "judicial activism" are trying to use the courts to do something they could have done through legislation, years ago.

Obamacare, as originally envisioned, required everyone to have health insurance, and if they didn't have it or buy it, they would be fined.   This was taken to the Supreme Court, who at the time held that the "fine" was a tax, and Congress can pass taxes under the Commerce Clause.   Kind of a weird decision, but there you have it.

Once Republicans were in power, they didn't abolish Obamacare, because it was too popular.  Instead, they zeroed-out the "fine" so that the "mandate" to buy care was entirely toothless.  You were required to have or buy health insurance, but if you didn't - well, the consequences were nothing.

So now we are back in court.  Why?  Well, traditionally, if a part of a law was found to be unconstitutional, then it may end up invalidating the entire law.  On the other hand, judges are usually charged with "saving" a law, if part of it is flawed - or that is at least the philosophy of some jurists.

Say, for example, you have a law that has four parts.  The first three outlaw discrimination based on gender, race, and religious affiliation.  The fourth part institutes a quota system for hiring, so that employers are required to hire people based on race, so their workforce reflects the ethic makeup of the United States.  You laugh, this was on the ballot in California last Tuesday - and failed.   The Supreme Court has held that ethnic quotas are unconstitutional (the Bakke case) so presumably this fourth part of our hypothetical law would be unconstitutional as well.

Does that mean the whole law should be thrown out?  Or are the four parts separable so that they can work independently of one another, or more importantly, independent of the fourth clause?  In this case, I think you would argue that the first three parts of the law should be "saved" and the fourth part negated.  This is akin to the deed restrictions on our Virginia house - that prohibited blacks and Jews from buying or living in the properties in that development.  Those deed restrictions are still on file at the County Clerk's Office, but they are unenforceable, due to decisions from the courts.  They didn't decide that the deeds themselves were invalid as a result.

In the case of Obamacare, the folks suing are claiming the entire law should be thrown out, as without the "fine" the toothless "mandate" is now unconstitutional.  And since the rest of the law is not sever-able (they claim) from the mandate, the entire law should be thrown out.  Here's where it gets tricky:  The court as it is presently composed, favors a "strict interpretation" of the law, by reading the text of the law.  The litigants are arguing that the court should look to the intent of Congress in deciding the fate of the law. Since it was Congressional intent that the mandate force people to sign up and thus reduce the overall costs of health care (by having everyone insured) the rest of the law should fail.

Interesting argument, but one that I would think would fall flat with the current court makeup - the "textualists" who read only the black letter of the law.  These are the same folks who held that a law that says discriminating based on gender also covers sexual orientation - as it is the "gender" of the person you are discriminating against, based on who they sleep with.  They did not look to the intent of Congress is making this decision - and the intent of Congress at the time the law was passed was not to cover sexual orientation.

All that being said, jurists make a lot of noises about legal theories and how the laws are to be interpreted according to these theories.  The reality is, in many cases, that jurists make up their mind based on political views, and then bend their theories to fit those preordained decisions.

The Obamacare decision will be a bellweather as to how the new Court will act.  Will the Supreme Court be a steady hand at the tiller, steering the ship of State through storms?  Or will it be a weathervane, turning in the wind to the latest political fashions?

I would hope, given the conservative justices' claim of textualism and strict interpretation - as well as as a horror of "legislating from the bench" that they would decline to get involved in overturning a law that Congress had the opportunity to overturn, but chose not to.

Because, you see, that is the whole deal with Roe v. Wade.  Congress failed to act, because of political expediency, to decide whether abortion should be legal or not, and if legal, when and how.  So the liberal court of the era invented the trimester system we have today.  Regardless of your feelings about abortion, even the most liberal lawyer realizes that this went far beyond the traditional, "Constitutional/Unconstitutional" decision-making mandate that the Supreme Court has traditionally limited itself to.

If the court overturns Obamacare and Roe v. Wade, it is being internally inconsistent in its logic and is instead just using its stated legal theories to advance a political agenda.  This will not bode well for President-elect Biden, if the election ends up in being decided by the court.

Because we know which way the weathervane will be blowing, by then.

UPDATE:  It seems from the oral arguments that the justices don't even see an "intent" by Congress to invalidate the law.  After all, if Congress intended to invalidate Obamacare by zeroing-out the penalty, why not just abolish the law at the same time?  Justice Kavanaugh - I need to buy you a beer!