It's Just a Fucking Movie or Comic Book - Not a "Universe"! 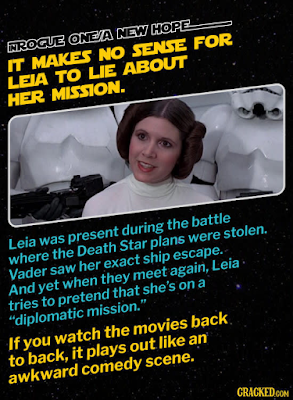 If you start questioning the plot lines of movie franchises, maybe it is time to move out of your Mother's basement.

I was online last night, as I woke up and couldn't sleep.  I was surfing the Internet and came across a discussion about Star Wars.  The thread was about some internal inconsistency in the plot lines of the movie.  How could the Jedi Knights be called only a "legend" when they were a major political force only 20 years earlier?

What followed was an intense discussion about the various plot lines, the politics of a fictitious empire, and so on and so forth.  At no point did anyone just come out and say, "It's just a fucking movie people!  The plot is whatever the writers say it will be!"

You see, Star Wars and Indiana Jones were originally one-off throwaway films.  They were an homage to the Saturday matinee "Serials" that an earlier generation watched - Westerns or SciFi thrillers like Tom Mix, or Buck Rogers. "Come back next week for Chapter IX!"  Star Wars also recycled the plot of a famous Samurai movie (another homage from a film school graduate).  There was no "universe" or over-arcing story line. In fact, some writing decisions in the first film became awkward in the second - Princess Leia being the sister of Luke (and not a potential romantic interest, as in the first film).

What ruined Star Wars was when it became a "franchise" and they tried to explain everything and tie up all the loose ends.   Movies are all about suspension of disbelief, not about creating an alternate history.  Sure, the sequel was fine, and maybe the third one. But when the prequels spent more time on developing the "universe" than in story-telling and character development (and lots of real action, not CGI nightmares) it all came apart.  The end, of course, was when they tried to "remake" the original by adding scenes and CGI crap and thus destroyed what little was left of the magic.

You can't over-analyze entertainment or turn it into a religion. Like I said, movies (and books and whatever) are all about suspension of disbelief to get you to go along with the story line. You start picking apart plot details, it ruins the fun.  For example, in the original Indiana Jones movie, they show Harrison Ford riding on top of a Nazi submarine for thousands of miles, only to appear in a submarine pen in the next scene.  Not explained is why no one saw this stowaway who apparently lived on the deck of the sub for days or weeks with no one noticing (for some reason, no one manned the conning tower?) and the sub never submerged the whole time.  Also, he somehow jumps off the sub as it enters the submarine pen, without being seen by the dozens of Nazis manning the place.

You're suppose to ignore this glaring error and go along with the plot and enjoy the ride.  Dissecting movies like this is like trying to analyze the "plot" of a roller coaster ride.  "I understood the first climb, and the first hill, but the second curve before the inverted loop seemed forced, and it didn't seem to jibe with the rest of the ride."  It's a fucking roller coaster!  You ride it and scream and have fun. You don't over-think it.

So the idea of trying to "make sense" of the Star Wars "universe" is just nonsense - it is just stuff a writer wrote, and it doesn't have to be internally consistent, as it is just a roller-coaster ride.  But of course, sometimes writers write themselves into a corner, and at that point, they do a "reboot" of these franchises, which is to say, they throw away the "canon" and start over with something new.  Batman now has dozens of different "Robins" and Star Trek has had more than one "reboot" over time.  It is an implicit way of saying, these are just stories, folks!  But the die-hard fans consider them "alternative universes" and take this all deadly seriously.

Of course, comic books have gone the same route, and people take this way too seriously - whether they are followers of the "DC" or "Marvel" universes. And sadly, they have stronger opinions about these things that they do about their own religion (which comic books may have replaced, in their lives) or indeed their own national politics.  People know more about the politics of the Star Wars Empire than they do about their own country.   I don't think this is healthy, on a number of levels.

Again, these are just stories, people, not actual events.  Taking this stuff so seriously is, well, idiotic. The stories have no deeper meaning or logic, as they are whatever the writers want to write at a particular time.  Fan fiction is clear evidence of this.  The other thing is, well, this stuff is pretty juvenile, and while there is nothing wrong about an adult visiting an amusement park on occasion, there reaches a time in your life that you have to grow up and put away childish things and take on adult responsibilities.  This obsession with movie franchises and comic books is just another example of the infantalilization of America, where grown adults act like big goofy children - and have serious discussions about minutiae of comic book franchises.

This is good for the movie studios and the comic book companies - the latter of which have gone from relative obscurity into money-making machines that are even listed on the stock market. Back in the day, being a comic book publisher was a pretty seedy, low-rent kind of business, selling ten-cent comics to pre-adolescent boys.  Today, there are tie-ins to movies, television shows, and of course, "merch" in the form of action figures, games, clothing, branding, cosplay, and whatnot - sold more to adults than children. It is a billion-dollar business.  And by obsessing about cartoon characters, well, you are making a lot of other people very wealthy, but impoverishing yourself a little more.

Of course, maybe this is the new norm.  I was reading Litter Box Comics, which is a very well-done strip written by a woman who draws her family as cats. What is interesting about the strip, is that the husband and wife are totally into Sci-Fi and comic book characters. Grown people with children, obsessing about Star Trek and Batman.  Maybe this is the new norm.  My parents' generation read books and went to serious adult-themed movies.  Sure, they watched television with us - but they didn't dress up as characters from the TV shows, collect figurines, or go to comic book conventions. Life was a lot more serious for them.

This is not to say the lady who draws the Litter Box Comics is a bad parent.  Indeed, from what I can see, it sounds like they are great parents.  I am just pointing out that, well, our world has changed dramatically in the last 50 years or so. We seem to be embracing childhood, not only well into adulthood, but perpetually.  Maybe that is why people today act so goofy and weird - from the President on down, from Antifa to Qanon.   You can believe whatever you want to believe, and being a perpetual kid is no longer viewed as a bad thing, but a desirable outcome.

I dunno.  Maybe this goofiness is a good thing.   But I am not so sure.   Maybe we need more "adulting" in the world - a term that has come into vogue as of late, as people more and more abdicate adult responsibilities.

But I think this much is true:  If you are struggling in life, with debts and job worries, or finding a place to live, or if you are an adult living with your parents - and yet can tell me the names of 50 Star Wars characters - maybe, just maybe, it is time to grow up a bit and put away the toys and start "adulting" in life.   Because collecting the whole set never amounts to much later on.