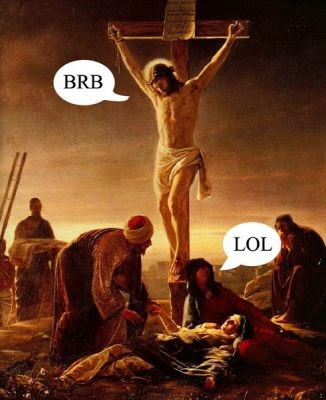 For God so loved the world, he sent his only begotten son to re-boot the franchise.

In my previous posting, I noted how people get caught up in these stories - in comic books and movies - and take then literally, rather than just as good story-telling.  Story-telling has a long history, as pre-historic (irony) people sat around the fire and an elder would keep them enthralled with his stories of derring-do and days gone by.  Probably a good thing for him, too, otherwise the rest of the tribe would see him as a useless parasite and sacrifice him to the Gods.

Storytelling back then - and today - was designed to foster belief, and belief cannot be dissected and analyzed and placed under a microscope. When you do, it falls apart. Just as the young man questioning the consistency of Star Wars mythology finds major plot holes, anyone who questions the tenets of the Bible or any other religious document ends up frustrated, as often these documents are internally inconsistent - and full of plot holes.

In the comic book and movie world, when these inconsistencies grow too large to accommodate with plot devices or McGuffins, you simply "reboot the franchise" and create an alternative universe or timeline so you can start over with a fresh sheet of paper.

Perhaps the New Testament is the first example of this.  The Old Testament - the foundation of Judaism - was so rife with internal conflicts and contrary messages that they needed not just an update, but a do-over.  After all, how can you have a message of "thou shall not kill" in a book filled with scores of murders - often by the almighty himself?

So you send in Jesus with a new message of love, understanding, stealing horses, and giving financial advice.  Bible 2.0 overwrites version 1.0 and inconsistent parts are wiped out, or at least negated. This is lost on most "fundamentalists" and "full gospel" followers, who spend a lot of time rummaging around the Old Testament, looking for trouble and trying to find excuses for their hateful behavior.  They don't get the fact that the whole point of Christianity is that God sent Jesus down to correct all the bad stuff that was going down in the Old Testament.   For a Christian, the Old Testament is context for the new, but when it comes down to old versus new, the new over-rides the old.   Period, paragraph, end of story.

Of course, it didn't end there. You might argue that Islam is another "re-boot" as well - treating Christianity as one of those side-stories that is not relevant to the canon.  Christians and Jews might view Islam as one of those spin-offs that isn't really part of their "universe".   Prequels!  Ugh!

And when it comes to religion, well, there is no greater source of "fan fiction" out there.  Everyone has their own interpretation of the Bible, and it has spawned a number of spin-off franchises, such as Protestantism.   Not canon!  Well, at least in some people's minds.

By the way, where do you think the term "canon" or "canonical" came from?  Yup, religion.  Which is why it is scary this term is bandied about when talking about SciFi movies and comic books. It's bad enough that one religion is already based on science fiction - we don't need another!

But what it all comes down to is stories, as I mentioned before. Belief requires the suspension of disbelief - which seems pretty obvious when you state it that way.   You can't get drawn into a movie or a novel if you constantly pick apart the threads of a story.  And this is why it is so jarring when actors break the fourth wall, or an author leaves a very obvious and unforgivable plot hole in a book that "takes you out of the story".

But no one expects you to literally believe the story in Star Wars, or Batman, or Spiderman, or even in an adventure novel.  You suspend disbelief, but you don't believe, either.

With religion, it gets trickier. You are expected to believe, but in order to do so, you have to suspend disbelief, which means in part, not nick-picking the stories to pieces. Because if you are going to go down that route, well, it leads to disbelief.  And that's OK, too.  You aren't going to go to Hell because you don't think the Galactic Empire is real, or that everything set forth in the Bible is actually the way it happened (even the parts that disagree with one another).

There is, however, a special place in Hell for people who cherry-pick individual verses and then twist them around to advance a particular politcal or monetary agenda here on Earth.  Belief is a fine and wonderful thing and all, but it can get in the way of rational thinking - and by hijacked by people whose interests are adverse to your own.  And you need not be strapping on a suicide vest to figure this out. When someone tells you the Bible says to give them 10% of your pre-tax earnings, it pretty much is financial suicide as well.

But some of us don't need stories to have faith.  Sure, the stories are fun - and sometimes instructive. Although I still don't get the stealing the horse bit - but that just illustrates that sometimes writers put in stuff that doesn't fit the rest of the story.  And let's be real here - the Bible was written by human writers, not etched in stone by God - even the Bible admits that (other than the ten commandments).

So whether you are sucked "into the Spider-verse" or "into the Jesus-verse" the answer is the same.  Enjoy the stories, but don't take them literally.  Belief is a fine and wonderful thing, but like all things, should be used in moderation.