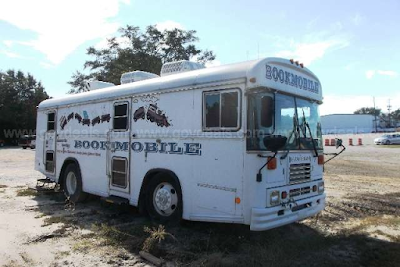 All it needs is to be complete is a flaming dumpster to tow behind it!

At this point in a President's career, they are usually thinking about their legacy - how will they be remembered by posterity?  How will historians characterize their term in office?   Well, that's how a normal President would think.  Trump is revealing, in his last days, how abnormal he is.  It appears he may be in the early stages of Dementia - or late stages.   Failing that, he has some serious mental health issues - a deranged view of reality, which he views as "mean" but it just is what it is.  He keeps bending reality and it is snapping back and hitting him on the nose.

To assuage his ego, he is leaving office, kicking and screaming, claiming all sorts of voter fraud.  Each new claim is even more specious than the last and quickly debunked.  Only the most hard-core Trump supporters believe any of this nonsense - and likely most of it is arising from the Russian Internet Research Agency - trying to sow discord in the United States.

It would all be so funny if it weren't horrifying.   Taking a cue from one of Trump's upcoming Nuremberg rallies, some wind-up soldier somewhere will set off in his Hummer, loaded with weapons, and start shooting up a Biden victory rally.  I fully expected this to happen yesterday - waiting for the sound of gunshots, as we watched people dancing in the streets across from the White House.

Worse yet, I suspect some Qanon nutjob is right now buying fertilizer and diesel fuel and renting a Ryder truck.  Yes, that.  You see, when people start talking trash, well, these unhinged individuals act on it.  You don't have to conspire to commit such crimes, only create the environment where they can occur.  William Randolph Hearst wrote an editorial suggesting that someone shoot President McKinley.  Some idiot took him up on the offer.

This is the legacy of Donald Trump.  It is akin to that of other petty dictators.  In the final days before he  killed himself, Hitler was obsessed with destroying Paris - commanding his Generals to burn the city to the ground.  Fortunately, cooler heads prevailed - cooler heads who realized that there would be a post-war era and that people would be held accountable for their actions later on.

But Hitler wasn't content to just destroy his enemies - he also wanted to destroy his supporters as well. The German people had failed him, he felt, in his drug-addled brain.  While he was not successful in destroying Paris, he managed a scorched-earth policy in Germany, assuring that his own people would unnecessarily suffer after the war.

Trump's legacy is certain to be negative.  Historians will, years from now, put down his Presidency as an aberration - caused by Internet craziness egged-on by outside forces.   Trump himself will be seen as mentally unhinged - a diagnosis we will see confirmed in the coming months and years.  It is entirely possible that in the next few months, it will be announced that he is in early dementia.  Or, as I noted before, perhaps his mood-swings are explained by his blood sugar levels - Type II diabetes caused by a horrifically poor diet and utter lack of exercise.   We saw this go down with Mark's stepmother, until she got on medication.

Whether the politics of grievance have any legs remains to be seen.  I suspect that some violent act will occur in the coming weeks, which will eventually force the fence-sitting Republicans to realize that burning down Paris is a really bad idea - and that they will be held accountable after the war is over.

But then again, there are always the hard-core true-believers, who will "follow orders" to the bitter end, and even after it is over, grouse that "but for...." they would have won.

Maybe they can move to Argentina?