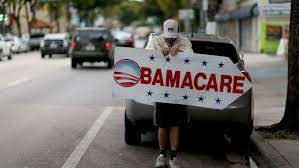 Obamacare has its share of problems, but it's getting better.

It's been a few years now that we've been on Obamacare.   I signed-up again this year, although it probably wasn't necessary - the system is now set up to automatically renew your existing plan, even if you do nothing.  Well, at least that is the way it works for Ambetter Peachtree.  They still suggest you go on the site and select your plan - and there were more plans to select from this year.

The site was running like lighting today - the first day of the sign-up window.  Perhaps few people were on it - preferring to wait until the last minute.  Most of the data was pre-filled from last year, and most of the questions were straightforward.

For our area, there are now two providers.  Blue Cross bailed out of Coastal Georgia last year, leaving us with one choice of providers - Ambetter Peachtree, who also administers Medicaid in the State, I believe.  That is one problem with Obamacare - if no insurance companies sign up to provide coverage, then what?  So far, Ambetter has turned out to be a better deal than Blue Cross and seems to be accepted everywhere.

Well, apparently there is money on the table, as another company, "CareSource" (which sounds kind of cheesy, the name that is) is now offering plans.   This is good news, as they offer some bare-bones, high-deductible plans for "only" about $1000 a month, so if we lose Obamacare due to the Supreme Court getting a bug in its bonnet, at least we can fall back to a plan that "only" will cost us $12,000 a year (ouch!).   The bad news is, our existing plan has gone from $1400 a month to over $1800 a month, which means our monthly cost will go from nearly nothing to about $275 a month.  Yea, I know, weep for me.

Even with insurance, you can still bankrupt yourself with medical bills, or at least put a dent in your savings.   Some plans only cover 20% of emergency room care, with a $8,000 deductible or more, and a cap of over $18,000 out-of-pocket.   What that means in dollars and cents I do not know - you have to actually file a claim with many of these plans to see what they cover - and it is often mystical when you get the bill what is covered and what is not.   My heart procedure (which turned out to be totally unnecessary - I am as healthy as an ox, apparently) ended up costing me $5000 out-of-pocket.  The billing was about as opaque as a lawyer's bill.

If I am reading some of these plans right, you could end up owing about $20,000 or so, with the "out-of-pocket" and 20% co-pays.  This is a lot of money to many folks - folks who can only afford the cheaper plans that are covered entirely by subsidy.

What worries me is that in 2022, if Obamacare still exists, our plans will be even more expensive - this seems to be a trend, at least for a while (costs did go down when Blue Cross left the picture, but it seems that every year, premiums go up, in part because I am getting older, but also because medical care is getting scary-expensive these days.  Slash the tires on your doctor's Porsche.  Anarchy!

In our journeys this summer, we met other people who, like us, are facing early retirement.  Many are work-camping, which provides a free place to stay, free utilities (even propane in some cases) and a nominal salary of $12-$15 an hour, part-time.  If they can keep their joint income around $30,000 or so, they can live fairly comfortably with no overhead expenses (presuming their RV and tow vehicle are paid for) and get Obamacare with a full subsidy.

Some would argue that this is unfair, and they may have a point.  But there are a lot of people out there struggling in Jeff Bezo's salt mines, and I am not being facetious about this.  In California, we checked into a KOA campground across the street from an Amazon distribution center.  About 1/4 of the "campers" were living in some older ratted-out RVs and walking across the street every day to stuff your goodies in boxes in the warehouse.  We also saw a poster at another campground, exhorting us to join "Amazon Camperforce" and become modern-day Joads.  These sorts of folks - and Uber drivers and Door-Dash drivers - are not making a lot of money, and as part-time workers or "contractors" they are often not offered health insurance.  Obamacare might be their only choice.

And remember kids, all those folks in Silicon Valley are leftists - and have your best interests at heart!  Actually, a surprising number of them are Republicans, or become Republican, once they make their first Billion and get the tax bill.

But seriously, if Obamacare is abolished, I guess I would either have to go back to some sort of stripped-down high-deductible plan (like I had before Obamacare, with Blue Cross) - although those were getting pricey - approaching $1000 a month even back then! - or get a job to pay for health care costs, at least part-time.  This is assuming, of course, that I am employable.  No one is hiring old people for these various jobs in the high-tech salt mines, and I am not sure I could get back into the legal profession at my age - after being out of the game for so long.  We'll just have to see.

The alternative - no insurance - is a scary one, in an era where one trip to the emergency room could land you with a six-figure hospital bill, or an $4000 ambulance ride, or worse yet, a $14,000 "Life Flight" helicopter trip.

Good news, though, dying is still largely free, although it seems the cost of even a minimalist cremation runs about $1000 these days.    Maternity care is even more scary-expensive. Boy, they get you coming and going, don't they?

Of course, one of the reasons medical care is so expensive is the threat of malpractice suits (and actual suits) which means any doctor worth his salt will recommend every damn test possible, to avoid allegations of malpractice later on.   Legal reform is a needed part of medical reform, I think.

Can Obamacare be improved?  Well, on the IT side, it seems they have made great strides.  The site did not crash at all this year, and only one of the many, many questions you have to answer was vaguely worded.   On the other hand, without assistance of someone with a college education, who is computer savvy, the ordinary Joe would have a hard time figuring out the site.

The costs are still out of this world, and my idea on how to fix this is to convert Obamacare to a bare-bones high-deductible hospitalization plan, rather than a one-size-fits-all cover-everything plan.  Some plans even offer vision and dental!  That's just crazy.  And speaking of crazy, mental health care and addiction treatment are wildly expensive, and both are required to be covered by ACA plans.  Even transgender sex-changes are covered by some plans, apparently.

Perhaps one reason why premiums are so high is that the local city is known as the "Methamphetamine capital of Southeast Georgia" - and the opiate capital as well.  Lots of "sports medicine" places here, writing 'scripts for oxy for people who decidedly do not look sporty.

But to some extent, this idea of providing a "bare bones" coverage has already been implemented - deductibles have been raised considerably, along with out-of-pocket maximum limits.  Monthly premiums still continue to climb, however.  Until the medical-industrial complex is bought to bear, this will continue to ratchet up in costs, over time.

Many people beatify doctors - thinking they are saints.  And as with the post-9/11 era, where "first responders" were made into Gods, today with the pandemic, we are doing likewise with the medical community.   And some deserve these accolades, but many more do not.  It is a job, and you make money with "billing opportunities" such as a terminal cancer patient.  We met a fellow this summer who lost his husband to stage-IV colo-rectal cancer - metastasized to his bones and liver.  I went through this with my Sister - it's time to call Hospice (and those folks really are saints!) and cash it in.  But her doctor kept treating her until her lifetime coverage cap was reached.  Nice folks there at the Laramie County Oncology Center and Veterinary Hospital.  Well, they did this same thing to this fellow, who spent his last weeks in life throwing up from chemo and radiation.  And I have seen this before - with a friend who had pancreatic cancer - spending his last month in the hospital instead of out on his boat, loaded up with morphine and beer.

I guess we grasp at straws when facing death.  The doctor treating my sister told the family that "with prayer" she might recover!  This was less than a week before she died.  I hate that guy - he felt that giving false hope was somehow helping.   But I guess a lot of doctors have trouble dealing with death just as we do - and they see a lot more of it.   But I digress.  The point is, doctors are flawed human beings like we are - never take the opinion of one of them as words handed down from God.  They can, on occasion, be quite crazy and unreliable.  Get a second opinion.

Like I said before, if you can make it to age 65, they will rebuild you from top to bottom, like the six-million-dollar man - and it would cost about as much, in today's dollars.  You can get your heart bypass, new knees, new hips, new lenses for your eyes (to fix cataracts) and a CPAP machine, a sleep study, and all the colonoscopies you can stand - as well as a medicine cabinet full of pills.  Whether all of this is necessary, is, of course, another question.   But medicine is like the law - when you get a "deep pocket" client that you can bill, you bill.  And Uncle Sam is the ultimate deep pocket, I'm afraid.

But all that being said, the "Trumpcare" plans already being offered are nothing but a cruel hoax (much like their namesake) and the vague promises of Trump to come up with a "beautiful" plan are just not going to cut it - nor are the plans of the American Enterprise Institute, who, like Jeff Bezos, clearly has my best interests at heart.

So, Obamacare for another year - let's hope.  Or, with the docket of the Supreme Court, maybe only another week.  Funny how they timed that for after the election, eh?