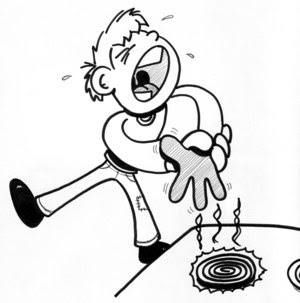 The strongest lessons you learn in life are from direct experience.  Often, however, they are the least useful lessons or indeed, the wrong lessons.

Indirect or projected learning are hard, and the lessons learned are often weakly imprinted in the brain. Learning is painful - when it is fruitful.  Mark is somewhat technology-impaired, and when he asks me how the remote control works, or how to do something on the computer, it is tempting to just grab it out of his hands and punch the keys to make it work - but that only insures he will ask me next time around.  It is painful to watch, but when he struggles to learn something by doing it himself, he ends up knowing it cold and doesn't need further instruction.

That being said, if you can program your brain to benefit from indirect learning or projected learning, you will be head and shoulders above the rest of the world.   You won't have to take out a payday loan or a high-interest credit card and go into default to learn the pitfalls of these crooked financial instruments - you would realize they are shoddy deals simply from the way they are presented or by learning about the experiences of others, or just sitting down and thinking about how 25% interest works, with a calculator and a pencil.

Recently there was an article online about conspiracy theories and role-playing games.  The author "ran" role-playing games (similar to these "escape room" games, where you look for clues to solve a puzzle).  These sort of games have been in ascendancy lately.  When I was a teenager, this nonsense started with "Dungeons and Dragons" but the fad quickly petered out. In today's nerd society, DnD as well as other role-playing games have become wildly popular, now that players can play on the Internet and everyone is locked up at home with nothing to do.

Myself, I never saw the point to it.  If you explain the entire game to someone, it sounds silly, but if you are playing it - one step at a time, you are drawn into the "story" and it seems intriguing - even though it is just a made-up story that sort of progresses randomly.  It seems real when you are immersed in it, and seeking out clues and whatnot.

Cults work the same way.  Scientology notoriously teaches people in "levels" with each "player" having to pay to move on to the next level, but only after they've mastered a particular level.  Sounds a lot like DnD to me!   Scientology was very secretive and didn't want their "Bible" published, as people would just jump to the last chapter and say, "You telling us we're all space aliens?  Get real!" - and no one would pay the huge fees needed to learn this nonsense one level at a time.

I have no truck against Scientology - if you want to believe that nonsense, that's your business.  If you want to believe the Pope or the Koran, same deal.   Harvesting the stupid is the oldest game known to mankind.   If you want to become fabulously wealthy, start a religion, or better yet, take over one that is just being established.   The track record shows that the second guy in the gig is the one who really rakes in the cash, while the first dude is literally crucified.

What was interesting about this article is that the author claimed that conspiracy theories were like these role-playing games.  They don't just cut to the chase and tell you how the game ends, but instead leave a trail of "clues" and "breadcrumbs" for you to figure out.  And since you figure this out (direct learning) you tend to "own" these lessons and they are very strong and hard to dislodge from the mind.  Hence cult members are notoriously hard to deprogram.

Qanon works the same way.  People get "clues" which are so abstract as to be laughable - Rorschach tests on the Internet - and people fill in the blanks.   They've "solved" the Q-puzzle and get congratulated by their fellow sleuths (the so-call "love-bomb" - another technique of cults and evangelical churches) and then can move on to the next level.

But  as the author points out, it is sort of preposterous - if someone had real evidence of a worldwide conspiracy, why not just present it, instead of teasing it out in little dribs and drabs?  It is akin to these mystery novels or adventure novels, where clues are dropped here and there.  Or James Bond movies, where the bad guys all wear matching rings or have a lapel pin identifying them as part of Spectre, because, hey that makes sense, right?

In a way, it is not dissimilar from online cons and Nigerian Prince scams.   You see an ad for a Casita travel trailer for a fraction of its value!  What a deal!  But there has to be a catch, right?  You contact the "owner" and they have a long-winded story they feed you in dribs and drabs, because if they told you the truth up-front, you'd walk away as the story would be so preposterous.  Same deal for the Nigerian Prince who wants to send you the sum of ten millions dollars "$USD" by certain modalities.   They feed it in dribs and drabs and people get sucked in.  One older fellow killed himself over this, as his own family turned on him after he squandered tens of thousands of dollars on the scam.  Even in his suicide note, he claimed he would be vindicated some day, when all that money came pouring in!

There is hope, however.  In any cult or evangelical church, 1/3 of the people are just joining (and being love-bombed and dazzled by it all), 1/3 have been members for some time, and 1/3 are in the process of leaving, having gotten bored by all of it, seeing no personal profit it any of it, or after getting into fights with the other members.   These cults require a constant turnover of members and often these cults flare up and flame out with spectacular speed.   Quite often, like Jonestown or the Branch Davidians, they literally self-destruct.

If you have a family member or friend drawn into one of these cults, probably the worst thing you can do is try to talk them out of it.   Well, the worst thing you can do is join the cult with them, which they will try to get you to do.  Just back away slowly - no need for dramatic pronouncements that you are cutting them off from your life or whatever.  Just see them less and less until you are not seeing them at all.   Maybe eventually they will realize they are wasting their lives on something that will never profit them personally (but is wildly profiting others) and then come back to you.  Or they will latch onto a new cult or conspiracy theory - which is far more likely.  Once you are burned by an MLM scheme, you are prime meat for the next one!  True believers never stop believing, they just believe in something else, instead.

But to denounce the cult is to denounce them, in their minds.  You are merely backing them into a corner if you try to argue with them logically.  And cornered animals can be dangerous.  If there is any chance at reapproachmont it would be if you are just there when they eventually crash and burn.  And eventually, they all crash and burn, although a few take these beliefs to the grave - usually the ones that someone tried to deprogram.   And for the rest?  Well, maybe you need to re-examine your life and figure out why you are hanging out with such negative people.   Is leaving crazy people out of your life such a bad thing - or the best thing you can do for your own mental health?

As I have said time and time again in this blog - when you see a friend about to drive their car off a cliff, the best thing you can so is make sure you are not in the back seat.

Of course, I say this as a fully anointed member of the conspiracy (cue: scary theremin music).  I live on Jekyll Island and have bought cabinets from Wayfair. Bu-hahahahahaha!  Bu-hahahahah!  Bu-hahahaha!  <cough!>  <hack!>