The End of Boomer Politics? 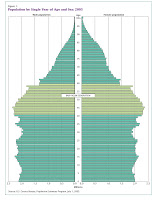 One thing in certain:  Joe Biden will be the last Baby-Boomer President.  Demographics drives politics moreso than political beliefs.

There is a lot of talk of whether Donald Trump will run again in 2024.  Some say he will start his own "TrumpNews" network to compete with Fox.  Maybe.  Maybe not.  A recent article online about Newsmax, a little-known online "news" channel that is to the right of Fox and little more than Trumpian propaganda, makes an interesting point:  There is no far-left counterpart (to the left of MSNBC) on cable television, because leftists tend to be young, and young people don't watch cable television.

Sadly, the article doesn't connect the dots and come to the obvious conclusion: As the baby boomers die off and the Millennials become the largest living generation, American politics may move further toward the left, or at least more toward the center.  Maybe this is why Fox News is starting to waffle a bit on far-right nonsense.  They are a business, and they report what is good for business.   If the viewer base is trending younger, they need to adjust their content accordingly.

Trump has made much noise (emphasis: noise) on Twitter about falling ratings on Fox News. And he may be right about that, but wrong as to the reasons why.  It isn't that Fox isn't pro-Trump enough, only that their viewership is literally dying off - perhaps some due to CoVid even. The youngest of "boomers" (born after 1945) are well into their 70's - fast approaching the average life expectancy in America..

This is not to say they will all die off overnight, only that over time, they will become less and less a part of the national conversation and less and less a part of our demographics.  The previous generation - the "greatest (and most modest) generation ever" has largely taken a dirt nap by now.  The number of World War II veterans dwindles daily, and it won't be long before the "last WWII veteran" is profiled in the news - likely some fellow who lied about his age to join the army right before the war ended.

Boomers will suffer a similar fate.  The last Vietnam vet, the last SDS member, the last Woodstock attendee, the last boomer - it will all happen in the next 20-30 years or so.

Of course, millenials and other following generations will become more conservative as they age.  As some articles note, younger people tend to be more liberal.  That doesn't mean, however, that they stay that way as they age.

I noted before that our age pyramid in the US is shaped like a minaret (or a giant penis).  The Baby Boomers - of which technically I am at the end of (born in 1960) make up a huge "hat" on the pyramid, with the rest looking more shaft-like.  When this bulge dies off, it will leave a much less biased age pyramid - with more younger people represented in the population statistics.   This could mean a more liberal population, down the road.

If we look at the pyramid (above) the widest part is at the end of the baby boom - people born in 1960.  The pyramid looks more like a cylinder below that.  If we assume normal age distribution for this latter group, when the baby boomers die off, the "pyramid" will look more like a rocket - with a pointed nose and a fairly uniform body.  The bloated "head" of the current pyramid will age off.

This assumes, of course, that nothing dramatic happens in the interim.  Even though we call it a "pandemic" the death rate from CoVid-19 is a blip on the radar on our age pyramid.

Of course, there are young conservatives, young gun nuts, young racists, young nazzis.  But I suspect they are over-represented in the media, and under-represented in real life.   A 20-something wearing a Hitler armband gets a lot of attention from the media - that's ratings eye-candy right there!  It doesn't mean he represents a movement, outside of Idaho.

And while we all like to think our political beliefs are deeply rooted in our psyche and our life experiences, the raw truth is,  you are not as much in control of your thoughts as you think you are.  In general, you will become more conservative as you get older.  It doesn't mean you are going to turn into Rush Limbaugh on your 50th birthday, only that your life experiences may cause you to re-think some things and move gradually to the right.

For example, a 20-something sees a documentary on Netflix about how everyone in jail is innocent.  He believes this (not having been lied to by the television for 50 years) and believes the justice system should be reformed.   By age 30, he's had his bicycle stolen - or maybe one of those innocent criminals put a gun in his face and took his wallet.  Or worse things happened to him, or friends of his.  He now is invested in "the system" and doesn't want anyone taking away what little he has managed to claw from society through years of hard work.  People change their minds about things, or they get nudged in other directions.

I can only say this was true for me.  As a 20-something without too many life experiences, I was kind of naive and thought the police were "the fuzz" and out to get us.  I though that corporations were "evil" and that bosses were "mean" and banks "unfair".  Twenty years later, my views changed - not dramatically all at once, but nudged to the right more.  When I became an employer, I realized what a shitty job being a boss is.  And I found out from bitter experience that bouncing checks and driving 100 mph everywhere weren't helping me get ahead, but pulling me down the economic ladder.  Of course, many people don't learn these lessons - and beat their head against the wall their entire lives.  Should I feel sorry for them?  I felt less sorry as time went on.

I digress, but not by much.  The point is, older people become more conservative, as I noted before.  And we are about to see a pretty massive die-off of older people from a large generation, moving the average age of the population down a bit.  For years, this number has been edging up.  I think it may edge downward in 5-10 years or so.  Not by a lot, but by a bit.

Others disagree with my assessment.  They claim that in 20 years, the average age will be over 40, and by 2100, there will be more people over 65 than children.  Of course, you could argue that is true today, if you consider "children" to be under the age of five.  It is kind of a meaningless statistic, when you think about it (but an alarming one, designed to get clicks for a Murdoch publication).  The bureau of specious statistics strikes again!

These same sort of statisticians said the Democrats would sweep the House and Senate and Biden would win in a landslide.   Sometimes statisticians are wrong.  Why would they be wrong about age?

Well, to begin with, a lot of these statistics are based on aging trends.  The "fastest growing age group" is people over 85.  Alarming - at least in theory.  But if you look at the age pyramid, it isn't hard to figure out - the baby boomers are all aging out, as I noted.   But they are also dying off.   Life is a one-way trip, and the age pyramid has a peak - of one man or woman, the oldest person in the world, a crown that changes hands on a weekly basis.  The over-85 group isn't going to grow the fastest forever.

Second, life expectancy is shrinking, particularly for my generation.  Why this is, is hard to parse. Some are blaming the opioid epidemic, or the obesity epidemic.  And perhaps that is true.  Whatever the reason, it doesn't seem that life expectancy will increase dramatically between now and 2050 or so. People are not going to live to be 150 years old - no matter how much better eldercare gets.   Your body just peters out over time - the cells stop reproducing and when they do, they often go berserk.  And eventually, you run out of brain cells, which never reproduce.  The rise in dementia is a direct result of people living longer - in my opinion, anyway.

Even if these alarmist statistics are true - and we turn into a nation of elders - it isn't clear that any 85-year-olds are going to be running for President, not when a 77-year-old is called out for being "too old" to be President.  At some point, we have to tap into some younger meat.  Congress is already old enough as it is.  And of course, the oldest Congressperson is Dianne Feinstein (age 87) - proof that not everyone becomes totally conservative with age.  I doubt she will run for President - nor would Bernie Sanders - in 2024.  And I doubt Donald Trump will, either, except perhaps as a Teddy Roosevelt "Bull Moose" spoiler - which I could totally see him doing.  Once we are done with Presidents, in this country, we pretty much put them out to pasture, Grover Cleveland notwithstanding.

I think we will see a bit of a youth boom in the coming years, as boomers age out, and leave their estates to a younger generation.  A new generation of politicians will emerge - likely more liberal than their forebears.  And these will be the ones to watch in the coming years.   I doubt we will see octogenarians or even septuagenarians running for President in 2024.  I think we will see a younger crowd - provided someone steps up the plate and younger people actually get out and vote.