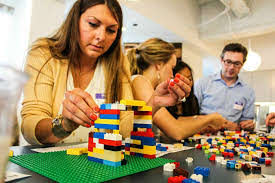 When did it become a "thing" for adults to play with children's toys?

I was in Walmart today and saw a wall of Legos kits in the toy section.  Back when I was a kid, we had Legos, but they weren't kits, but a collection of blocks and parts.  You bought a "set" and of course added on to it later on, and made things using your own imagination.   Today, you buy a "kit" that has all the parts to make a Star Wars character or the Millenium Falcon, or some other promoted tie-in with a movie, television show, or whatever.

Seems like an odd thing to me.  Before, you got these blocks - like the Frobel Blocks that Frank Lloyd Wright played with when he was a kid (and indeed, we also had as kids) and you created something from your own imagination.  Today, you assemble the "kit" of Lego pieces to make what they set out for you to make.  It lacks imagination and creativity.

But beyond that, what really troubles me is the market for these modern-era Legos.  Adults.   Grown-up adults.  You see it all the time on YouTube videos.  Some talking head on the tube with a wall of tchotchke behind him.  At least one of the objects in view is some sort of Lego construction.   Adults playing with Legos. When did that become a thing?  It's kind of creepy.

And some are saying it may actually be bad for your mental health.

When I was a kid, grown-ups (as we called them) never played with toys.   Maybe they might have a "hobby" of building RC airplanes, or making a ship-in-a-bottle.  But playing with Legos?  No, not really.

But it hasn't ended there.   Adults are extending childhood by embracing childhood toys, well into their 50's and beyond.

Comic Books, or as we call them today, "Graphic Novels" are mainly aimed at an adult audience.  When I was a kid, there was a stack of comic books at the barber shop, and only we kids read them.  Adults read Field and Stream or Sports Illlustrated.   And when we went off to college, Mom threw away our collection of comics, including Superman #1, which had food stains on it and torn pages, because we were kids and didn't "collect" comics and put them in plastic wrappers.  Why?  Because they only cost 10 cents and were worth nothing once you read them.  And even today, they are really worth nothing, other than adults have bid their prices through the stratosphere because they refuse to grow the fuck up.

Oh, it gets worse.  Not only are these adult babies reading comic books, they have created "franchises" of comic-book based movies and television shows - which dominate the movie business these days. Gone is Gone With the Wind, Hello Ironman!   Not satisfied with that, these nerds go to "conventions" and wear costumes to engage in what they call "Cosplay" - to pretend to be their favorite comic-book character.

Maybe it is because we lead such boring lives today that we do this.  Mark's Dad didn't have to play at being a superhero.  Maybe Superman can fly from tall buildings, he never jumped out the bomb bay of a burning B-17 seconds before it exploded.   But beyond that, the previous generations had a lot more seriousness to them, as life was a whole lot more serious back then.  There wasn't much of a "safety net" and no one was talking about free college or guaranteed jobs.  You had to work and work hard - and save your money.  You couldn't go into credit card debt to buy a Cosplay costume - credit cards didn't exist, and neither did such costumes.  And if you could cobble one together, people would think (rightly) that you had lost your mind.

BMX Bikes being ridden by adults is another disturbing trend.  When I see some guy in his 20's or 30's riding a BMX bike with those tiny 20-something inch rims, I shout at him, "Hey, your little brother called, he wants his bike back!"   But such folks are unashamed that they are riding a bicycle that is designed for a 12-year-old.   What's up with that?

The list goes on and on.  Adults playing with (excuse me, collecting) dolls and such.  It's a hobby, right? Not just regressing back to childhood.  And dolls are not creepy at all.  No, never.

I've written about this before - how our generation has been "babied" from the get-go.  We didn't have to make harsh choices as previous generations did.  Well, maybe some of us did - the guy who served three tours in Iraq, for example, knows how deadly serious life can get.   But few of us experience that level of seriousness - and we can hang out and party and act like big goofy kids, well into adulthood - perhaps forever.  We can elect a big goofy kid as President!  Yeah! More ice cream!

Maybe it is time to leave the toys on the shelf - leave them for the children.  This is particularly true if you are carrying an outstanding credit card debt every month - as I suspect a lot of these "Cosplay" folks are doing.   Harmless fun?  Maybe.  But when you grow up, you have to put away childish things.