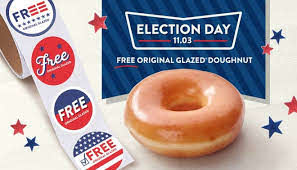 A reader asked me what my predictions are for election day.

So today is election day - yet many people, including myself, have already voted.  "What will be the outcome?" a reader asks.  My time machine is still in the shop, so I can't tell for sure.  But I think we will see a variation of the 2016 election and the 2000 election - a close call, the popular vote winner not necessarily winning the election, and legal challenges that could last well into December.

To begin with, it seems clear that like with Al Gore and Hillary Clinton, Joe Biden will win the popular vote, perhaps by as much as 8-10% or so.   But the electoral college was established precisely to prevent populous States from "out-voting" more rural States, and thus streamroll right over the more agrarian portions of our country.   If you have a problem with this, talk to Thomas Jefferson.  It was part of our Constitution since day one.  Back then, it was a compromise to prevent the populous Northern States from routinely out-voting the less populous Southern States.

In fact, that is one reason - or the reason - there is another messy legacy in the Constitution (since outmoded by Amendment) that slaves would be counted as 3/5ths of a person - to insure that the Southern States had representation in the House of Representatives.  That clause is clearly outmoded.  Whether the electoral college is, is another question.  Today it protects the rural Midwestern States from being bullied by the populous coastal States - as well as Southern States like Florida, Georgia, and Texas, which ironically may turn Democratic in this or coming elections.

Like it or not, we are stuck with the electoral college - nothing short of a Constitutional Amendment will make it go away, and to do that, you need Congress to pass such an Amendment by a clear majority and then have 2/3rds of the States ratify it.   Guess which States won't go along with abolishing the electoral college?   Yup, those same States who benefit from it.  So let's not pine for impossible solutions - abolishing the electoral college, free college, student loan forgiveness, free money, guaranteed jobs, or any other pie-in-the-sky "solutions" that have no chance of passing in our country.  And no, it doesn't matter how they do it in Sweden or whatever - that's not our country.

So Biden wins the popular vote.  But what about the electoral college?  Last time around, Trump won the electoral college "fair and square" by campaigning in places like Michigan, Wisconsin, Ohio, and Pennsylvania.  This time around, Trump's strategy is the same, but he is less likely to win all of these States "fair and square" but will instead rely on legal appeals much as occurred in the Bush v. Gore debacle of 2000.

The problem, of course, for Gore was Ralph Nader - who took away enough Gore votes to give Bush a narrow victory in Florida.   This time around, there does not appear to be such a "spoiler" on the ballot, other than a "Libertarian" candidate who looks to siphon off a few Trump votes.   Gore could have won Florida if the Nader votes had gone to him.   The problem with the "recount" was that it was only a partial recount of the areas that Gore felt could be swung his way.  You either have to re-count the whole State, or not at all - you can't cherry-pick the best counties and cities that might flip things your way - it just isn't fair.

But the Bush v.Gore case illustrates the strategy that Trump will likely use to try to swing some "battleground" States his way.   By filing endless lawsuits and appeals, he can delay the vote-counting until December 23rd, when vote counts are due, so the electoral college can meet and choose a President.  In the Bush v. Gore case, that was the basic strategy - stop the count, start the count (all over again) and then stop the count again, and "run out the clock" until December 23rd, when the point becomes moot and the initial count is certified.

Many of these "Swing" States, of course, have Republican Governors and Secretaries of State - who certify the elections.  So you can see how this could play out in a narrow election.

Trump has already said that he will challenge results in Pennsylvania - arguing that any vote counted after election day is invalid. Since the turnout is the highest in the nation's history - and a record number of absentee and mail-in ballots are to be counted, this means a huge number of votes might not be tallied, and mail-ins may favor Democrats this time around (historically, absentee ballots, mostly from the military, favored Republicans).  No doubt, they will continue their appeals of existing cases, such as the one in Texas, challenging "drive-in" voting and arguing that such votes (conveniently from a liberal stronghold) be thrown out and not counted, as under the "equal protection" clause, it is unfair that such voting options were not offered to voters in other counties.

The legal shit-storm could go on for months - or at least two months, anyway.

It is possible that Biden could score such an overwhelming victory as to render all these court cases moot - in which case, Trump might bow out.   It is also possible that the GOP could finally grow a spine and pressure Trump to concede - perhaps dangling out the hope of a pardon if he walks away.   But that seems highly unlikely.

It also seems highly unlikely that Trump would clearly win all of the swing States as he did last time around - and clearly win the electoral collage.   I suppose it is possible, but it seems improbable.  I think some sort of dispute, centered around Pennsylvania, will be more likely.

I think also, we will see "incidents" during the voting process.  "Trump Trains" of pickup trucks with flags a-flying, will block access to voting sites.  At least one "proud boy" will show up at a voting site with his AR-15 and shoot it off - not necessarily hurting or killing anyone, but shutting down the polling place for hours while Police investigate - effectively preventing hundreds of people from voting.

And of course, you are going to see multiple incidents of people not wearing masks and trying to make a thing of it. I saw one such Karen yesterday at the wholesale club - wearing her mask on her chin and her two grade-school kids with no masks at all.  You could just tell she was doing it on purpose, hoping someone would make an issue of it, so she could make a YouTube video with her phone or post something on Facebook about how she is a mask martyr.   That is what it has come to in our society - people trying to provoke things for their 15-minutes of fame.

We declined to indulge her fantasy.  Oddly enough - or not so oddly enough - she didn't actually seem to be buying anything.  We were there for an hour and her cart remained stubbornly empty, even as she wheeled it around and around the store - and no one would take the bait, either!  It must be frustrating to be a Karen like that -  you want to martyr yourself for the cause, and no one will oblige you by nailing you to the cross!  What would Jesus do?  Nail-guns are for sale in aisle A-3!

It is sad, how people are so divided and indulge in weak thinking.  Like I said, I have a friend who is Catholic and is voting for Trump because they believe he will cut their taxes (not true, in their bracket) and outlaw abortion (more likely).   But they delight in spreading these false rumors, such as Joe Biden doesn't know what State he is in, or who he is running against.  It devolves into schoolyard name-calling and taunting - bullying, really - which is usually the last resort of someone who has nothing left to say.  I can respect someone having a different set of opinions as mine - or a different value system - but can't abide by weak or moronic thinking.

And "difference of opinion" only extends so far.  If your opinion is "blacks should go back to Africa!" or "Hitler had the right idea!" then I can't abide by that, either.  Not only is it weak thinking, but not a mere difference of opinion, but a call to violence.  I can't tolerate your opinion, if your opinion is that I should be eradicated.   Funny thing, these new basement Nazis don't understand why minority groups don't go along with this and cheerfully line up for the gas chamber.   It's for the good of the country!

It is, perhaps, Trump's dog-whistling of such extremists that may be his undoing.  There are many people on the Right who are alarmed by his failure to disavow himself from such bullying tactics.  When people attempt to run the opposing candidate's bus off the road or drive into a crowd of protesters, you can't just stand by and say there are "good people on both sides" or "I love Texas!"   And maybe that will turn the tide - at long last, people will come to their senses.

We saw this in the McCarthy era - when both Nixon and Kennedy embraced the Communist witch-hunt.  It seemed that McCarthy was unstoppable - that he would destroy lives and careers and that he had the popular support of the nation.  Just as quickly, his support evaporated overnight, and within a short period of time, McCarthy - a drunken lout - was dead.   Sadly, his acolyte, Roy Cohn, lived on for decades, becoming the personal lawyer of a young Donald Trump.

History repeats itself.  And if history is any guide, Donald Trump will eventually flame out.  Whether this happens in 2020 or 2024, remains to be seen.

Regardless of who wins, it is likely we will see strife for years to come.  It seems to be a pattern in the world today - the rise of bully dictators and strong-men.  Like the migration crises, it is not limited to the United States.  But I see a new pattern emerging as well - liberal and socialist candidates gaining ground in a number of countries - perhaps even ours.  The era of the strong-man bully may be coming to an end.

Post Script:  I saw a "Washington Examiner" article (a newspaper that exists only in the minds of its writers) that criticized a liberal columnist for making the argument that saying "Trump is good for the economy" sounds like "at least the trains ran on time".  The Examiner Op-Ed piece went on for pages, ranting on how comparing Trump to Hitler was obscene and a disservice to holocaust survivors, etc.

Of course, the phrase "at least he made the trains run on time" referred to Mussolini, not Hitler, and perhaps the comparison is more apt.  Mussolini was a bully, an egotist, a coward, and actually - according to some sources - didn't make the trains run on time at all.   He was a Hitler wanna-be, a suck-up to Hitler and a failure in almost everything he did.

No, Trump is not Hitler.  Putin is Hitler.  Trump is the Mussolini sucking Putin's cock.

The Washington Examiner article has since disappeared.