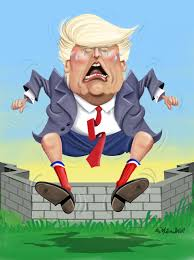 Conservatives decry the enshrinement of victimhood, and then claim they are victims for doing so.

In a recent post, I noted that it seems this "cancel culture" thing is more of a way for an obscure conservative columnist, author, or media personality to aggrandize themselves by claiming to be a victim of mean old leftists.  It is a neat trick, really - you can vault from obscurity to celebrity in a heartbeat, just by claiming people are trying to silence you, even as you announce this through a bullhorn.

But this is just a point on a graph, part of an overall trend.  The granddaddy (or as Yannia Yaniyopalous calls him, "Daddy" - that boy has issues!) of all of this is, of course, our soon-to-be ex-President (or dictator for life - stay tuned!) who claims victimhood at every turn, even has he decries others for claiming to be victims.  The mean old press doesn't like him!  The Democrats are out to get him!  People are being mean to him for calling him out for being mean to them!

It is cowardice, plain and simple.

They play this game, "trolling" people - or claiming to be trolling - and then getting upset when people call them out on this.  It is a stupid game - they say outlandish things, such as dog-whistling to the far-right or even outright Nazis, and if you respond to the bait, they say you are being mean to them or say it was all a joke, and "hey man, can't you take a joke?"  Ha-ha.  I stopped laughing at trolls a long time ago.  They aren't funny, just annoying.

It is bullying, plain and simple.  And like any bully, they are mostly bluff and bluster.  They try to intimidate you and if you punch them one right in the noggin, they cry like a bitch and run to the principal's office with a tear-filled tale of how unfair life is.

It is a game we all should refuse to play or get drawn into.  And yes, people on the left play this game as well - just not as well.  They claim to be victims, too - but of society at large.

I am not sure where I am going with this, other than there seems to be a distinct lack of courage among today's politicians and commentators.  They all want to be the aggrieved party, the victim, the subject of sympathy for their unfair treatment.

Sorry, but I'm not buying it, Sean Hannity et al.   When you are mean to others, you have no grounds to play the victim, when others are mean back.

Just a crazy thought, but you want people to be nice to you, try being nice to them, first.