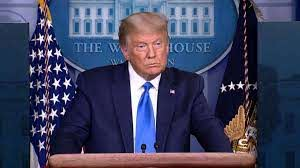 Donate now to the GOP to help litigate the election!  Exactly 0% of proceeds guaranteed to help in the fight!

A recent article online mentions that the GOP and Trump are trying to raise $60 million nominally to pay for litigation expenses in challenging the election results.  But if you read the fine print on the donation page, 60% of the money goes to retiring Trump's election debts, and the remaining 40% goes to the RNC general fund.  The art of the deal!  Or should I say, the art of the con.

Trump has used grievance politics since day one.  Everyone is out to get him, he says - the media, the Democrats, the courts - even his fellow Republicans or the people in his administration.  It strikes me as odd that many men vote for him because they see him as a manly-man who "gets things done" but in reality, whines like a little bitch that he is.  Real masculinity isn't complaining all the time about how things are "unfair" and real masculinity means admitting when you've made mistakes and them moving on.

So he uses this latest grievance to raise yet more money to pay his bills. Classic Trump.  But as an overseas writer has noted, in the realm of petty dictators, he pales in comparison to Narendra Modi in India, Jair Bolsonaro in Brazil, Viktor Orbán in Hungary, Vladimir Putin in Russia, Jarosław Kaczyński in Poland, and Recep Tayyip Erdoğan in Turkey.  Trump is a rank amateur - as he has been all his life.  Those other petty dictators have amassed vast quantities of wealth for themselves, or helped their supporters amass vast quantities of wealth.  Rather than enrich corporate interests in America (who, in turn, would have ensured his re-election) he settled for petty graft - getting people to stay at his hotels and other properties in return for favors.   Dream no small dreams, Donnie!

Maybe that is his problem right there - he didn't see the big picture.  He needed to get the unions on his side, or the corporations, and he did neither.  His tariff wars pissed off the corporations, and his excoriating of manufacturing companies - who are struggling as it is - didn't help any.  He promised to ease regulations, such as auto emissions, and the automakers fought him on this.  He may have "fired up" a new base of GOP support - a new base that scares the crap out of the old base.  People in the boardrooms of America weren't happy that Trump has aligned the GOP with Nazism, the KKK, and weird conspiracy theories such as Qanon.

His reality television persona worked great on television, but fell flat in the real world of international relations and politics.   People got sick of it and wanted to change the channel - but couldn't, for four years.  Others, well, they are not so bright, and are drawn to "reality" television controversies like moths to a flame.

I was reading the news today, and there was a "sponsored content" clickbait link to a story about a guy named "Chumlee" - which was the name of a character from a lame cartoon we had as a kid. The secret to spoofing Sponsored Content is that, if you are really intrigued by the click-bait title, to just exit out of the app or site and then look it up on Wikipedia.  You get all the information, neatly packaged, without having to click through a 50-page slideshow with pop-up, pop-under, sidebar, and banner ads.

Turns out, Chumlee is also the name of  a reality show star that has been on the air for eight years.  The show centers on a pawn shop, and like with the storage locker show and the motorcycle show, the "plot" centers around the characters trash-talking about each other.  Well, apparently, this fellow had a boatload of drugs and weapons in his house, but since he's on television, the worst he is facing is three years of probation.   Gee, it's great to be white and rich, eh?

What struck me as odd is that people watch this shit - for hours at a time.  And these are the sort of people who think politics is like reality TeeVee - where you "trash talk" the opposition, and the audience applauds wildly and says, "On no you didn't!" and "You go girl!" or whatever.

In that regard, the media is having a field day with this election - if they can drag this out for another week or so, the ratings will be boffo.  Maybe they can renew it for another 80 episodes like this "Pawn Stars" gig.   Chumlee for President, 2024!  We've had worse.   We're having worse.

But Trump will still appear in reruns.   It is likely he will take his grievances to the airwaves and some channel will give him a platform, simply because it will be good for ratings. Or will people turn on him?  It is hard to say. Most former Presidents go quietly into the night.  But Trump isn't a normal politician, and he thrives on attention, particularly negative attention.   I suspect Fox News might be done with him, but he will be a regular guest on Infowars and its ilk.

We'll just have to see.   If Trump tries to drag this out into January, well, Georgia is having a special election about then - and the balance of power in the Senate is at stake.  Toss in a recession (or depression) and a surge in Coronavirus cases - and the spectacle of a President being dragged out of the White House, and well, you may see a "blue wave" after all.