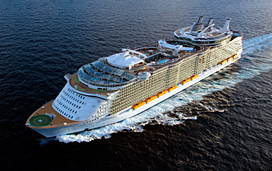 Take a survey and win a free cruise!   Are you really that dumb?

Lately, I have gotten a string of "survey" calls lately.   Usually I just hang up, as they are recorded calls.   The weirdest had to be from "The Institute of the Paranormal".    I don't know what they are surveying - pods in the basement?

Survey calls have been used as fronts for various scams, including the cruise ship scam which I wrote about before - and yea, they have called me, numerous times.  They call up and ask you questions, promising to enter you in a drawing for a "free cruise!" and after five or so innocuous questions, lo and behold, you won the contest!.  Of course, the cruise isn't free, and although the name of the cruise line sounds like a major cruise line, it isn't.   You can figure out the rest.  They want a credit card number.

And sometimes, they don't call you, you call them.  The latest trick in the scammer's book is to register a 1-800 number that is the same as a 1-888 number for a legitimate company.   I fell for this when I dialed Comcast to ask about their Cable Modem service, and was redirected to a survey site that told me I had won a free something-or-another.   Here's a clue:  Legitimate businesses don't play games like that.  Hang up.

The interesting thing about this whole mess, to me, is that I, like many other people, hang up on phone calls claiming to be surveys.   In fact, very few phone calls these days are from legitimate people.

When someone calls up and says, "How are YOU today?" I pretty much know that I am going to hang up.

When someone calls up and says, "May I speak to Mr. Robert Platt?" I pretty much know I am going to hang up.

When I answer the phone, I answer with my name, "Robert Bell" instead of "hello" - a habit I have from my days in the lab (it got tiresome answering the phone and saying, "TR-7A Lab" and having the Engineer on the other end say, "Who's this?").

So it only makes sense that the person calling you identify themselves, clearly, before asking "how are YOU today?" or "May I speak with Mr. Robert Platt?"

So, I always ask, "Who is calling?" and ask what organization they are from.   The scammers will muffle their voices and give odd names that are hard to pronounce or spell, or pretend there is static on the line, so you just get a part of the company name.   Hang up.

Others will say, "I'm not allowed to say, this is a personal matter, is Mr. Robert Platt there?"

I never, ever, say "YES".   Perhaps this is an obsolete habit, but back in the 1980's, even "legitimate" telephone companies like Sprint would "slam" your phone service by having telemarketers call you, and if you said "YES" at any time in the conversation, they would record this as "proof" of your permission to switch long-distance carriers.

Yea, these scams have been going on for decades now.   Sad, isn't it?   That we can't control our own telecommunications system?  That some corrupt GOP freak will say that shutting down obvious scams and rip-offs is "over-regulating legitimate businesses" and "killing jobs" or some other bullshit.

Like I said, we are morphing to a fraud-based economy.   Who have you scammed today?   Try Grandma.

Of course, major telcos could be regulated, and today, when you switch carriers or long-distance plans, they usually have a "verification agent" ask if you really want this.   So we can stop Ma Bell and Sprint from scamming (to some extent) but we can't touch the real con-artists, who want to slam an unnecessary phone service onto your cell phone, via a survey call or a contest you entered by filling out a form and putting it in a fishbowl at the pizza shop.

Entering contests or taking surveys is just not worth it.  Most of them are scams and trying to figure out if one is "legit" is just too much work - and not worth the risk.   By the way, many of these contests, particularly the fishbowl type, never award any prizes, or if they do, award the prize to a family member of the company running the contest.   So the next time you see a fancy car in the mall, with "WIN ME!" on the side of it, don't be a fool and give them your name and cell phone number.  On the back of the entry form is a "Permission" you signed to slam your own phone service with a $10 a month fee for nothing.   It just ain't worth it.

So this leads me to the main point.

When they tout surveys and statistics on the television these days, are the numbers they are flogging worth anything at all?

So the only people who answer surveys are old people, lonely people, unemployed people, and total idiots.

That is a bit of a skewed sample.    People who are at work at a job aren't sitting around answering phone surveys.  They are too busy.   People who have half a brain or have something to do, hang up on these nuisance calls.    Young people with only cell phones, either never get these calls, or if they do, don't answer them, as they use Caller-ID to screen them out.   Anyone with half a brain would hang-up on a survey call.   What is in it for the person surveyed?  Nothing but wasted time and perhaps a risk of fraud.
So the people from the polling companies have a real problem here.  And I tend to doubt polling data and survey data as a result.   In the last Presidential Election, the last Gallup poll before election day had Obama losing to Romney, 49% to 48%.   Obama won, the next day, with 51% of the popular vote, to Romney's 47%.    Polls are pretty much bullshit these days.

It is sad, but much of what we read in the media today, that is not just outright lies crafted to help advertisers, is just bad data.