Much ink has been spilled about Netflix.   But is the premiere online movie site bound to fail, eventually?

I am a Netflix subscriber and I enjoy using the service.   However, I don't think Netflix will be around for a decade or more, perhaps even less.   Why is this?   The service has a number of vulnerabilities:

1.  The Interface is horrible:  It is very slow to load, and on an older computer or device, it can take several minutes for all that HTML coding to load, and in many cases, it simply freezes or crashes.   Netflix coders think that we want a gee-whiz-bang interface with all the bells and whistles, so they keep making it more and more complex, and thus slower and slower to load.   It is annoying that a computer that has no trouble streaming an entire movie, can barely load the opening page to the service.

2.  The Interface is disorienting:  Like with social networking, the Netflix interface gives you seasickness.   Out of the thousands of movies they have in their library, you might very well think they have only a few dozen, as the search feature keeps steering you to the same films, over and over again.   As with Social Networking, the ratings on the films are based on an "algorithm" that decides for you, what it thinks you want to see.   The algorithm is usually wrong.   If you watch one WWII movie, well, too bad for you, because you are stuck with  WWII movies on your "suggestions" for the rest of your life, and they will all be given four stars based on your "viewing preferences".   It sucks.   You can't just get a LIST of all movies and scroll through it.   Many movies can only be found by using text searching.

3.  The library is very limited:   At first, it seems like Netflix has a lot of films to watch.   And then you watch them and realized that they really don't.   A lot of stuff is pure garbage - old B movies (or worse, euphemistically referred to as "cult classics") - made-for-TV movies, television shows, old History Channel junk, and the like.   It is like one of those all-you-can-eat buffets which is filled out with mac 'n cheese, bread, and a lot of other cheap starches.  And Netflix pushes you to eat a lot of starches - the more obscure B-movies and documentaries that they don't have to pay as much to license.

4.  Content comes and goes:   One day a movie is there, the next it isn't.  Or it jumps from DVD to online streaming - and back.  Netflix has licensing issues with many providers who grant and then withdraw their rights for viewing.   Netflix got started by using a lucrative licensing agreement with STARZ that did not anticipate online streaming.  That agreement expired, and they seem to be struggling for content ever since then.

5. HBO Syndrome:   The problem with HBO is that the content there is stuff you already saw in the movie theater, or saw on DVD in your home - so you don't want to watch it again.   And they show the same stuff over and over again.   Or, the content is just stuff that is, well, OK content, but not really compelling.   Netflix has the same sort of deal - constantly pushing the same so-so movies at you, over and over again.   New movies take forever to get to the Netflix DVD queue, and even then, you are fighting with everyone else to get them.   Expect a LONG, long wait for them to be available by streaming.

Netflix is the same way.   No one really "loves" Netflix, with its hard-to-use interface and library of somewhat bizarre B movies, television shows, and documentaries.  But it is the only game in town, in terms of online streaming and mail-back DVDs.   Netflix killed off Blockbuster and other video rental stores, leaving a few sad kiosks in their place.  Netflix, for the time being, is the only game in town.

That could change - and suddenly.   If someone can come up with a better streaming service with better content (forget the DVD part) and a more user-friendly user interface (stop telling us what we want to watch!) they could steal away the market from Netflix.

First to market is often last in the marketplace.   AOL was the first big online portal.  It's gone.   Vonage was the first big VoIP provider.   Where are they now?  Online services are not hard to replicate, particularly once someone else has blazed the path.   Studios and other content providers could start their own streaming services - or steer their content elsewhere.  Other existing companies (Apple, Amazon, YouTube) are already trying the idea, and may come up with a better product - which wouldn't be all that hard. 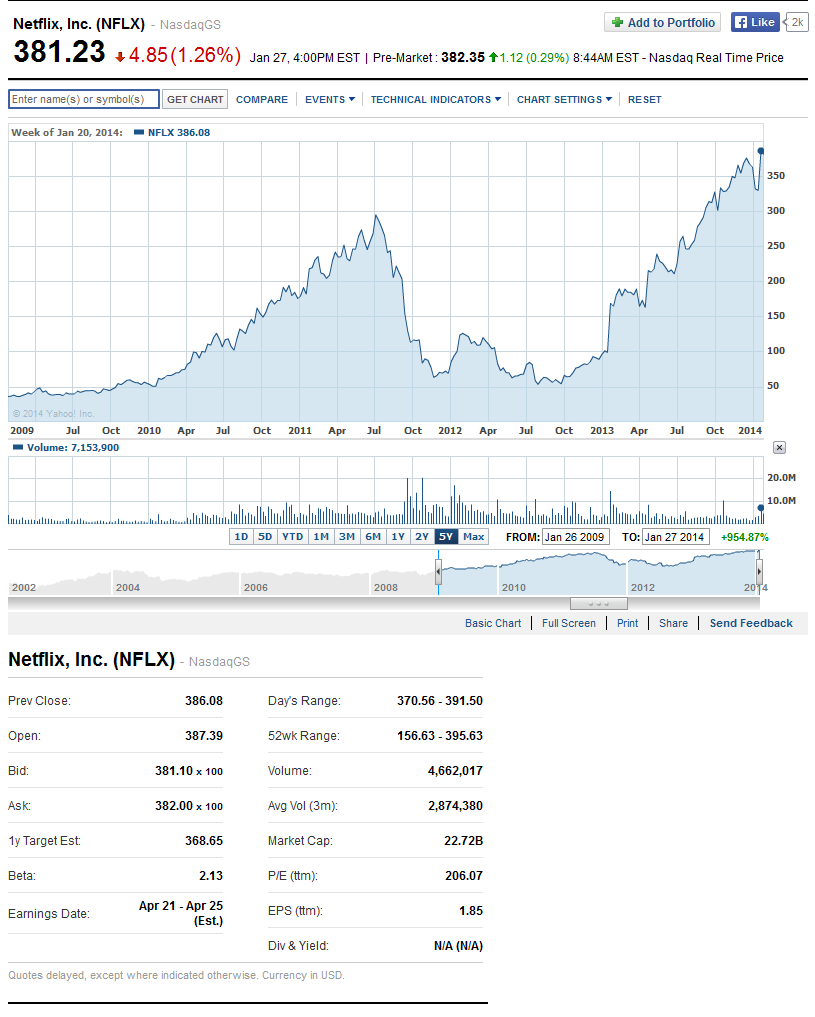 Netflix stock, like Apple, has shot up into the stratosphere in recent years.   This is due more to plebes investing in something they are familiar with, than with any real numerical analysis of the value of the company.  Yes, the company is profitable at $1.85 in earnings per share.  But of course none of this is paid back to shareholders in the form of dividends - not that it would matter.   With a P/E ratio of 206.07, such a dividend (even if all earnings were paid out) would amount to about a 0.5% rate of return on your investment.  This is pretty good for a savings bond, pretty piss-poor for a risky Internet investment.

And if you don't think it is risky, look at the stock chart above closely.  The share price has taken quite a roller-coaster ride in the last four years.  Netflix has proven that they are more than capable of screwing the pooch, with the Quikster debacle, which caused the big dip in the chart you see above.  They want to "tweak" the business model, as Facebook does, but people don't really want the model changed - just better movies and more of them (and not an improved ratings prediction system or Facebook interface, thank you).

Even if you believe that Netflix is a sustainable business model that will become a blue-chip stock and major brand in the marketplace - with staying power measured in decades, not years, the price of the stock will have to come way down - or profits go way up - to correct the P/E ratio to something rational.

With tech stocks, most people are betting on the latter.  People buy Facebook stock or Linked-In stock, with fantastic P/E ratios, on the premise that "down the road" these companies will become wildly profitable, usually because they have a "monopoly" on some aspect of the market.  But trying to maintain a monopoly on some aspect of technology or the Internet is like shoveling water.

Apple had a brief monopoly on its iPod for music.   It still does.   But funny thing - in less than a decade, you don't see iPods anymore.   People now stream music over their phones, or "listen" to music on YouTube.   Having an actual iPod sort of marks you as a codger, in this day and age.  It is not that someone came up with a competing device (Microsoft tried, but failed) but that people just morphed to new technology entirely (streaming music).

I'll still continue to use Netflix - for the immediate future, anyway.   But increasingly, I am finding more and more content on YouTube (a possible competitor to Netflix for movie streaming).   After living through numerous online services (from Prodigy onward), I realize that on the Internet, what seems permanent one day, is often gone the next.  Last year's "must have" gadget ends up as a piece of e-trash, in a drawer, somewhere.

In fact, I would say the median time for a gadget or website to go from "hot" to "not" is about five years or so.  Netflix is about due for a turn on the spit.

And no, Netflix, I don't want to "share" my movie preferences on Facebook.   Sheesh!  Talk about taking your eyes off the ball.....