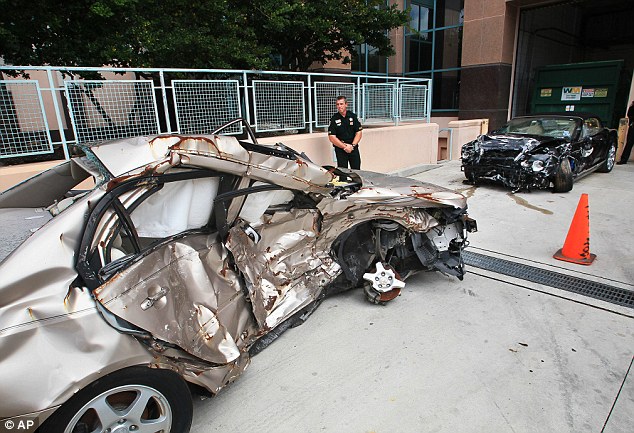 Do the rich get away with murder?   Yea, on a regular basis.

I recently was reading an article in the Sun-Sentinal about an interesting DUI case that I had not heard of before.   A Florida "polo tycoon" named John Goodman (not the actor) was found guilty of manslaughter when he killed a young man in a DUI accident.

The accident has all the makings of Frank Capra movie.   A super-weathy heir, who spends all this time playing polo, drives drunk in his tank-like Bentley, through a stop sign at over 60 miles per hour.  He T-bones some hapless youth in a Hyundai, and flips him into the canal, where he drowns.

If you have ever seen one of these Bentleys, well, you get the picture.   The damn thing is the size of a switch-engine, and costs hundreds of thousands of dollars.   The poor kid in the Hyundai didn't have a chance.  Goodman left the accident scene, didn't bother calling 911, and didn't try to help the poor kid in the Hyundai, who drowned as a result.

It has all the makings of a Frank Capra movie, like I said.  You can't make this shit up.

He even went so far as to legally adopt his girlfriend, so he could transfer his wealth to her and avoid attachment in a Civil suit.   Boy, if any Lawyers are going to hell, his surely are.   How sick do you have to be, before you start thinking up stuff like this?

But wait, it gets worse.

While he was convicted of manslaughter and sent to jail for 16 years, the conviction was recently overturned, on the grounds that one juror lied during voire dire when he failed to mention his ex-wife was convicted of DUI.   This came out after the juror decided to write a book about the trial, where he claims he was "pressured" to find Goodman guilty.  What a jerk.

So, now we have a new trial, but the cars in question have been sold off or scrapped, so evidence no longer exists.   And the lawyers for the defendant are trying to get the blood test thrown out, on the grounds that laws enacted since the crash, would not have allowed the blood test.   And, they argue, without the remains of the Bentley to examine, they cannot raise issues of mechanical defects, which they claim are responsible for the accident.

In other words, it looks like the guy is going to get away with murder - or at least manslaughter.

And if you saw the O.J. Simpson trial, this should not surprise you.

A lot of people thought the O.J. trial was about race.  It was not.  It was about money.   O.J. was rich, and he could afford the best legal team on the planet.   And they turned the trial in to a celebrity circus and got him acquitted.

If O.J. was some poor black kid from the ghetto, he would have gotten life.   It's all about money, and it is as simple as that.

Now, lest you think I am some bleeding-heart populist, bear in mind our legal system has always been this way - and probably always will.

And in other countries, it works about the same way.   In Communist countries, the son of a party leader gets away with all sorts of nonsense, just as here, some Kennedy cousin does the same.  People with money and influence can buy their way out of trouble, in many instances, simply by slowing down the legal system to the point where local prosecutors will offer a plea bargain, rather than go to trial where they will likely lose.

And that explains, plain and simple, why white-collar criminals get away with short sentences, while the guy who shoves a gun in your face and demands your wallet, gets 20 years.

Yes, we live in a class society in the United States.  And the wealthy, it seems, do get away with a lot.  In a recent trial in Texas, a young man was given probation for killing people in another DUI accident.  His defense (affluenza) was basically that he was a spoiled brat who couldn't help himself.   And the judge bought it.   I wonder how much it cost to buy the judge?

The weird thing is, there are those on the Right who claim that this "class warfare" stuff is all a bunch of nonsense - that the rich are being demonized unfairly, by the far Left.    They claim that the poor are just jealous of the well-earned success of the very rich, and that the rich came about their wealth - every last one of them - by legitimate means, and were not helped along the way through government connections and the use of wealth to influence government officials in their favor.

But you would have to be pretty naive to think that someone who, for example, made a fortune in the telcon, wireless, or cable industries, did so by the pulling himself up by his bootstraps.   I have been involved in all three, and I can tell you, there is a seamy underside and history to these industries (particularly cable) where influence peddling is the name of the game.

I recall one wealthy Texan who approached us with a new invention for a two-way paging system (a precursor to texting).  We wrote the Patent Application on the eve of the 1992 election.  When Bill Clinton won, he told us to pull the plug on the whole project.  "Hell, I don't know any Democrats!" he said, "How am I going to get FCC licenses with a Goddam Democrat in the White House?"

And the behavior of the very rich hasn't helped any, either.   One jackass compared his sheltered and pampered life to that of the Jews under Hitler.   He quickly retracted that asinine comment, but doubled-down his bet by bragging he bought Rolex watches "by the six-pack".   Here's a clue, Dude:  when it comes to the debate on class warfare, you ain't helping.

Will our system ever change?  I doubt it.   I was raised at the edges of the privileged class.  My parents came from humble backgrounds (e.g., one or two generations removed from white trash) and as "strivers" they were allowed into the Country Club, but never really accepted by the old money or the very rich.

And yea, rich kids get treated differently than the poor.  Even upper-middle-class kids, like we were, get treated differently.  My brother was once arrested for DUI and some pretty major drug possession.   Thanks to some expensive lawyers, not only was he not sent to jail, he had his record expunged when he turned 18.   A kid from the ghetto would have ended up in jail, or at least a youth home.

And there is the problem, right there.  The middle class and upper-middle-class certainly don't want to see their minor perks eliminated, if we truly went to a class-blind society or justice system.   When your 17-year-old gets busted for drugs, do you want him to get the same prison sentence as some poor kid?   Of course not - you'd pay in blood to keep him out - most parents would.

As a middle-class person, are you willing to give up what little perks you have?   Probably not.  Which is why they say the middle class does more to keep the very poor down, than the very rich do.   The super-rich really don't give a rat's ass about the welfare state - after all, they can afford tax havens.   Mitt Romney pays 15% long-term capital gains rates.  But the struggling striver making $100,000 a year in ordinary income, he'll kick a homeless person in the teeth, if he thinks it will advance him one more step up the economic ladder - and allow him to desperately cling to his middle-class status.

But maybe the great Karmic wheel does spin around.  O.J. is in jail now - on different charges, of course - and it will be a while before he gets out.   And maybe this Goodman guy will be convicted a second time - this time with a jury with no jackalopes on it (the juror in the first trial is, ironically, facing jail time).  Maybe our system isn't so bad, after all.
Newer Post Older Post Home