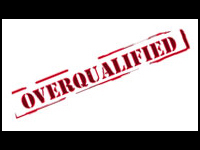 Many job applicants are told that they are "overqualified" for a job.  What does this mean?

During the recent downturn - and every downturn before then - people get laid off and when they go to apply for a job, they are told they are "overqualified" which mystifies them.   What does this term really mean?   It can mean several things, particularly in this day and age when even looking at a job applicant sideways can get you sued.

As I noted in my posting, "Getting a Job by Thinking Like an Employer" you'd be surprised by the attitudes some job applicants come across with.  It is one thing to be self-confident during an interview, and another to be arrogant and overbearing.   And it is a thin line.

As an employer, of course, you want someone who can do the job for the least amount of money.   But, you also want someone who will stay at the job, and not just move on when the first better opportunity comes along.   Henry Ford doubled the salaries of his workers (to the princely sum of $5 a day) when he realized he was losing 10% of his labor force - on a daily basis.   Before long, he was inundated with job applicants and turnover in his factory was nil.

Not everyone can afford to pay like Henry Ford, however.

Thus, when you hire someone for an "entry-level" position, you are looking for someone who needs that job and isn't likely to just move on when they get a better offer.   Training a new employee is expensive and time-consuming, and when the quit, searching for a new employee is also expensive and time-consuming.  You don't want to do this over and over again.

So when you apply for a job, it can sometimes hurt to have too many credentials.   If they believe you are going to cut-and-run in short order, there is little point in hiring you.

What a hiring manager is looking for is someone who can do the job - and desperately wants it.   The guy with a car loan and a baby on the way isn't going anywhere.   The single man living with his parents, on the other hand, has little to shackle him to the desk.

So when you get someone with a credential list a mile long, looking for a lower-level position, you have to wonder whether they are in it for the long haul.

How do you get around this problem?   There are a number of ways.

First is to downscale your resume.   This may sound odd, but if you come across as super-smart and you are applying for a dumb job, they may view you as "overqualified" and nothing but trouble.

When I applied for jobs with Domino's Pizza and the United Parcel Service, being a college dropout was a plus - they just assumed I was a slacker in for the long haul.   I didn't have to mention my other work experiences and the fact I was still in school (although that can help, by showing you need the money).

If you can get your foot in the door and get an interview, it helps to stress how much you need and want the job.   Point out that you have student loan debt and need money.   Point out that you are well, not quite desperate but needy.   And make reassuring noises that you are in it for the long haul - that you want to learn about the business.  Who knows?  Maybe someday you'll end up running the place:

Politics brought Mr. Meeks to Washington. Born in Hattiesburg, Miss., he grew up in Gulfport and graduated from the University of Southern Mississippi, where he majored in political science and English and was elected student body president. He planned to go to law school, but in 1979 he borrowed his mother's car and became a pizza deliveryman for Domino's in Biloxi to defray education costs. Soon after becoming a store manager, he decided that being "a pizza guy" was his future. His parents were "kind of horrified," he recalled in 1998.

Like I said, you never know where a job will take you.   Mr. Meeks died a Millionaire, owning over 60 Dominio's franchises.  Of course, not all of us have the motivation Mr. Meeks did, to go from rags to riches.  Then again, what else are you going to do with a degree in Political Science and English?  Teach?  Mr. Meeks may have been "overqualifed" for Pizza delivery, but he wasn't qualified for much else, really.

Of course, the moniker "overqualified" can also just be used as a catch-all excuse for a number of other things, such as "we just don't like you" or "we don't hire blacks" - things you cannot say out loud, and hence the use of code words like "overqualified."   There is not much you can do about that, other than to move on, and try to figure out how to better present yourself, if at all possible.

This website presents some pretty interesting strategies for jumping the "overqualified" hurdle.  However, I am not sure their suggestions are any good.  Their suggested wording for cover letters (if they even get read at all) come across as smarty-pants and boastful.   Being creative or clever in a cover letter is never a good idea.   While it may get brief attention, it also means it more than likely will head toward the circular file (wastebasket).
Newer Post Older Post Home