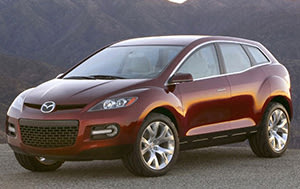 
Buying a high-mileage used car (one with over 100,000 miles on the odometer) is always an exercise in faith.   It is hard to predict how much longer such a car will go.   Will it top 300,000 miles, as Subaru likes to imply?  Or will the cost of repairs exceed the value of the vehicle in short order?

Usually, the latter is the case, which is one reason I suggest fishing further upstream and buying a late model, low-mileage used car.  Save the "mechanic's specials" for the mechanics.

In the Yahoo! article, the author did something very interesting.  He looked at cars going to auction and then collated the data based on the description codes to see which models had the most engine and transmission problems, among other criteria.   The results don't bode well for Ford motor company, which is over-represented in the survey, in terms of its various brands (Lincoln, Mazda, Land Rover, Jaguar).

The Subaru faithful (and it is a religion) will be happy to know that none of their models show up in the list.  But then again, neither do Hondas, Toyotas, or even Chevies.   I am not sure that is saying much.

The article was brief on analysis, and I think the reasons some models are on the list can be expanded upon.   Here are my comments and analysis:

The "New Beetle" was just a Jetta in drag, really.  So one wonders why the Jetta, Passat, and Golf are not also on the list, as they are all basically the same car, underneath.   I think there is more here to the picture.

First, VW has had a powertrain reliability problem dating back to the days of its Pennsylvania plant.   They offered a 100,000 mile powertrain warranty as a result of this.   A friend of mine has a mid-2000's Jetta, and they did in fact replace the transmission at 68,000 miles, free of charge.

The author is correct in that a manual transmission model is likely to be more reliable.  But there are other factors here which make this the only VW on the list.

The retro-trend styling was a fad (think, PT Cruiser, Chevy HHR) and has faded.   It was a very feminine car and sold mostly to women, and many of them (like my sister) didn't take care of them.   She parked hers outside (while her garage was full of crap) and rarely washed it and never waxed it.   As a used car, it would be hard to sell, as the audience would be limited.  Women today want big honking SUVs, not cute flower-mobiles.   Even the core audience for the car has evaporated.

VW has since re-styled the car to make it look more aggressive and masculine - as sales of the original design tanked in recent years.   This is the problem with retro styling - where do you take it?

So I think the styling issue has more to do with its inclusion on the list than the transmission.  Otherwise, the Golf, Jetta, and Passat would be on the list as well.

The PT Cruiser would be on the list, too, except that most of them are already in the junkyard.

I am taking this one out-of-order, as the remainder are all Ford or Ford-related products.   The Cooper is being unfairly singled out there, I think, based on one specific model.   Earlier Minis offered what is called a "Continuously Variable Transmission" or CVT which is essentially a belt-drive, like a snowmobile, except the belt is steel.   So you can imagine how well that worked out.

By the way, Nissan is going whole-hog with CVTs in the Altima.  I am not sure this is a swell idea.  Maybe Nissan will succeed where so many others have failed.   Then again, maybe not.   Never buy an experimental or unusual design or technology until it is well-proven to work.

The reputation of the CVT-Mini is legend, and there is a class-action suit over those cars.   But other Minis have conventional automatics or manual transmissions, and I suspect they are far more reliable than the CVT models.   In a few years, when the CVT models all go to the junkyard, I suspect you may see the Mini disappear from this list.
"9. Mazda 626 (automatic transmission issues, all models.)

8. Lincoln Aviator (a gussied-up, unpopular Ford Explorer that had unique sensor and software issues which negatively impacted the overall powertrain and electronics.)

7. Jaguar S-Type (Extensive transmission and engine issues on all V-6 and V-8 models. Along with Limited edition models with ungodly replacement costs.)

2. Land Rover Freelander (A cost-cutting exercise that went way past the bone.)

And a true shocker, the single worst used vehicle at the wholesale auctions when it comes to overall defect rate at trade-in time is....

1. Mazda CX-7 (Engine issues on these vehicles are legion with nearly a third of these vehicles sold with "Engine needs service" announcements at the auctions.)"

I am taking all of these in one lump, as they are all basically Ford or Ford-related products.  Ford owns, or used to own, Lincoln, Land Rover, Jaguar, and Mazda.   I can see where Ford might be over-represented on this list.   Ford has made some good cars, and their F-150 truck is pretty dependable.  But Ford cars tend to have interior trim problems and transmission problems and electrical problems, over time.

A friend of mine has had about five Taurus wagons (he inherits them from his parents, who bought new ones every three years).   While they work fine for about 130,000 miles, he reports replacing the transmisssions on all of them, at about that point.

My own experience with a Taurus was about the same.    Switchgear that broke again and again (three sunroof switches in 50,000 miles is just not acceptable) and a leather interior that felt like paper and looked like crap in short order.

Oddly enough, the cheaper "mouse fur" interiors of the more plebian cars (and trucks) tends to wear better, over time.   And that might be one reason that only "upscale" models appear on the list.   Most of the models shown above was also sold as some other brand of car, usually in cheaper trim.   The Jaguar S-type and Lincoln LS shared their platform with the Thunderbird - which is absent from the list!

Suspiciously absent also is Volvo, which was another Ford brand (at one time).

Land Rover bears special mention on two fronts.  First, their hydraulic suspension is known to be problematic (and BMW put this in some X5 models, when they bought Land Rover from Ford - thankfully, I did not have it in mine!).   Too many gadgets to break down, as well.   And the famous no-rust aluminum body meant that the frame took on that task - leading to more class-action suits.  Replacing a frame on a car is no easy task, to say the least.

As I noted in my BMW Fright Pig Article (and follow-up), used luxury or high-performance cars can be a nightmare in short order, when they age.  And I think this is why you see more plebian cars last longer on the road.   Replacement parts are cheaper (since more of the cars were made, meaning more aftermarket companies were willing to tool up to make parts) and there are fewer doo-dads and gee-gaws to repair.

My BMW X5, for example, while an esoteric car, had a simple 5-speed manual transmission and a standard (non-pneumatic) suspension.   It also had a durable leather interior, something that American car makers seem to have trouble replicating.  While it had issues with electronics (window regulators, stereo system) the basic engine and drivetrain never gave me any trouble.

More complex models, such as the 4.4 and 4.8 V-8 models (and the short-lived 4.6) with "all the bells and whistles" had more issues - and were more expensive to maintain.  Top-end model BMWs, such as the 7-series can be a nightmare of repair work.  The rear sunshade on a 7-series has five electric motors to actuate it.   Do you want to be fixing that?   There is a reason you see old, old 3-series still on the road, but few 5- and 7-series, in comparison.   Simple is easier and cheaper to fix.

Back in the day, you'd see many an old Biscayne still on the road (six cylinder, three-on-the-tree) long after its Pontiac or Cadillac equivalent went to the junkyard.   Less chrome doo-dads meant fewer places for salt and rust to accumulate.  And simple, durable interiors tended to last longer than fancy faux wood trims and soft fabrics.

There are, of course, some clunker cars that do not appear on this list.  Mitsubishi is conspicuously absent from the list.   This may be for two reasons.  First, most Mitsus probably don't make it to 100,000 miles, but rather are junked before a decade is out.   Second, they are not sold in large quantities, making them a marginal player and thus a blip in the statistics.  Absence from this list is not an indicia of quality.

Chevrolet and Chrysler don't appear on the list as well, and yet neither are known as top-quality producers.    Again, this may be that these cars are used up and throw away, rather than re-sold at auction.   People may try to re-sell a broken Land Rover.   A busted Chevy, on the other hand, probably gets junked.  On the other hand, some of these more plebian cars (like the Chevy Colbalt) while cheap, were surprisingly durable, at least for the first 150,000 miles.

Honda and Toyota don't appear on the list, either.   Both have a reputation for reliability, and many folks report driving them over 150,000 miles with no problems.  A neighbor recently told me that her niece had an old Accord "With over 200,000 miles on it!  Can you believe that?"  She drives Chevies and trades them every three years.   To her, that seems amazing.   Of course, the punchline is, the Accord won't be long for this world, at this point.   Japanese cars last a long time and then fall apart all at once.   Every car has an end-game, in the Weibull curve.

This is not to say these cars don't have their share of issues.  Some Hondas had radiator hose brackets that snapped off, according to one site.  But those sorts of things are the exception, rather than the rule.

I think the Yahoo! article was pretty useful and spot-on.  I hope the authors develop their algorithm further, to the point where it could be useful in determining long-term reliability of used vehicles.   Sadly, however, I doubt the algorithm can really be a true predictor, if you are buying a new or newer car, with the idea of keeping it for over 100,000 miles.

The problem is, of course, that the vehicles on the list were made nearly a decade ago, and things have changed since then.   BMW no longer uses the CVT in the Cooper Mini, and that might knock the newer versions of this car off the list.   Jaguar and Land Rover are no longer owned by Ford (or BMW) and the quality of the newer cars may be better (or far worse).   Mazda may (or may not) have gotten its act together since 2006.   You can't tell - and won't know - until these cars age and we can see their performance history for ourselves.   The data, by necessity, is backwards-looking.   You cannot project forward, other than to coast on the reputation of the marque - and that is a dangerous assumption to make.

Thus, cars today that we deem "reliable" based on records of years past, may end up being lemons or clunkers, as designs have changed and management priorities have changed as well.  The consumer really has no way of telling which car-maker has decided to gut the quality of its products in favor of cost-cutting.

Finding a reliable car over 100,000 miles is still something of a crap-shoot.