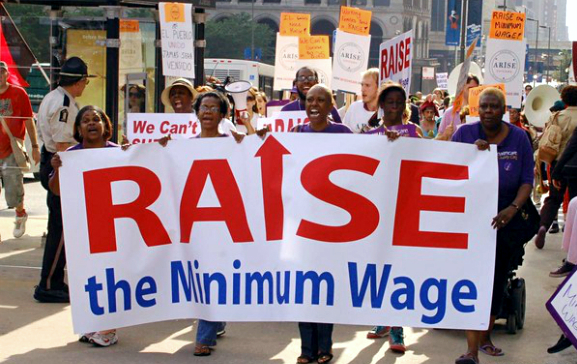 Will raising the minimum wage cause inflation?  Or do low wages just act as corporate welfare subsidies?  Both views are right, sort of.


The latest issue to be suddenly thrust upon the American people (by design) is raising the minimum wage.   The plebes love this sort of thing, as it plays to the "every man a millionaire" mentality - that we can just make everyone wealthier by passing a law saying everyone gets more money.

But as economists point out, that really doesn't work.  When wages go up, prices go up, decreasing purchasing power.   It ends up as a null-sum game.

Both sides on this issue are right - and also wrong.

On the "raise the minimum wage" side, we have the Service Employees International Union (SEIU) which has been picketing fast-food restaurants to make headlines recently.   Many reporters are breathlessly reporting that "the workers" (paging Karl Marx) are picketing their employers and "going out on strike" for more money.

The reality is, paid union organizers are showing up at fast food restaurants in places like Manhattan (home of the news media) and picketing some national chains for an hour or two (to allow the television trucks to set up and do sound checks) and then leaving.   It is less of a grass-roots campaign than it is astro-turf.

Are wages at these restaurants low?  Yea, they are.   Because it is the ultimate, unskilled, entry-level job in the world.   It should be the lowest paying job there is.

The argument raised by the unions is that at $8 an hour, no one can afford to "feed a family of four", as the annual salary at that rate (assuming you work full-time) is a paltry $16,000 a year, and that's below the poverty line!

And they are right about that, but also wrong.

You see, there is no law or Constitutional mandate that everyone should be able to "support a family of four" on crap job wages.   And most people working crap jobs don't have a family of four to support.   And if all you can get are crap jobs, maybe you should re-think the idea of having a family of four.   But of course, saying that is just heresy.   It is an inalienable right, in the USA, to squirt out babies, without having any financial means of support to raise them.

Thus, for many markets in this country, raising the national minimum wage is just moot - even fast-food companies are paying more than the raised amount.   And in fact, local or State laws may already be mandating a higher minimum wage than the national rate.

So why picket in Manhattan?   Well, again, that is where the national media is, and no one is going to report on a picket in Utica, as that is a five hour drive from city.

The unions are RIGHT, of course, in noting that low wages result in many workers qualifying for food stamps and other Federal subsidies, and in effect (as I have noted before) these are subsidies to the employers not the employees.   It may seem odd, but food stamps are a form of Corporate Welfare, in two ways.  First, they help the farmers, food producers, and food retailers, by providing a subsidy to purchase food.   Second, they help low-wage employers as an effective subsidy to wages.

So, one positive aspect of raising the minimum wage is that it would decrease the amount of subsidies that these "workers" get from the government.  If Wal-Mart or McDonald's pays a dollar more to an employee, that is a dollar less (in theory) the employee would get in food stamps - thus saving the taxpayers a dollar.

Since we pay all this money out in food stamps and other benefit programs to the poor, it in effect, subsidizes wages for low-wage-paying jobs.   Wal-Mart can attract and retain a low-wage employee, as the employee can get by on a combination of their low wages and government subsidies.

And this is why both Wal-Mart and McDonald's encourage their employees to take advantage of all kinds of subsidies, in the form of food stamps, obamaphones, heating subsidies, housing subsidies, and whatever else they qualify for.   McDonald's, until recently, even had a website for employees, with suggestions on how to do this - as well as save money in other areas of their lives.  They pulled the site down after quite a few faux pas were posted on it - including the suggestion that fast food was unhealthy for you (they were right, it is).

(Low-wage employers also love Obamacare, too.   Rather than having to pay for health insurance, they make everyone a "part time" employee, and tell them to get federally-subsidized Obamacare.  A minimum-wage employee qualifies for a full subsidy under Obamacare, so the Government ends up picking up the tab - transferring what was once an employer cost to the taxpayer!   Again, government handouts to the poor end up being subsidies to big business!)

So, one positive aspect of raising the minimum wage is that it would decrease the amount of subsidies that these "workers" get from the government.  If Wal-Mart or McDonald's pays a dollar more to an employee, that is a dollar less (in theory) the employee would get in food stamps - thus saving the taxpayers a dollar.

Here's a hint, SEIU:   Push that argument, and the American taxpayer would support you!

Put all that commie crap in the toilet, though, or you'll have some tough sledding.   Unions are still not looked favorably upon in the USA, even by the low-wage workers they are ostensibly trying to help.

But are the economists right that raising the minimum wage will fuel inflation?   Yes and no, yet again.

Again, in major metropolitan areas, where the prevailing wages are higher than the national minimum wage anyway, I doubt it will have much of an effect.   Employers already pay more to workers in places like New York City than they do in rural Georgia - and the menu prices at the local McDonald's are adjusted to reflect that.

But as wages go up in more rural areas, this will increase costs to retailers, manufacturers, and producers.   What makes sense as a "minimum wage" in New York City is an outrageous salary in the country.  In places where you can buy a house for $50,000, you don't need a lot of money to live on, to be sure.

So yes, it is not just some wild economic theory.   If Joe Restaurant Owner has to pay more for labor, then he has to raise prices, in order to stay afloat.    He cannot simply choose to "reduce profits" as most restaurants are marginally profitable businesses to begin with.

And maybe right there is the problem with a national minimum wage.  It fails to take into account prevailing wages in a given area.   What is a livable wage in one part of the country is homelessness in another.

And this doesn't just apply to low-wage jobs.   Many tech companies are fleeing the Bay area and Silicon Valley for greener pastures in Boulder or Austin.   Why?   Because a young Engineer out of college can't afford to live in the Bay Area, unless you pay him nearly twice as much as you would in Austin (and Austin is a whole lot more fun, anyway).

Move your company to where prevailing wages are lower, and you can pay people less - and they have better lives.   How much you make, in terms of dollars, is not always indicative of how happy or "wealthy" you are.

And this is also why all the new auto plants are in rural areas, as opposed to Detroit.   Nissan can pay less to a worker in Canton, Mississippi, and they can have a better, wealthier lifestyle than they would in Detroit.   It is a win-win for the employers and employees.   Not much of a win for Detroit, I'm afraid.

But both sides of this debate are "right" in part.  Raising the minimum wage should be thought about carefully.  We can't just make everyone "rich" by passing a law saying it is so.    On the other hand, why should taxpayers be subsidizing Wal-Mart and McDonald's?

And maybe that is where the SEIU can get the GOP on board.   Perhaps increases in the minimum wage can be tied to decreases in other subsidies, such as food stamps and the like.   That would sell to both sides of the aisle.