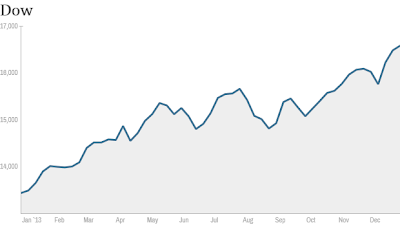 2013 is over and 2014 has started.
Today, I am wealthier than I have ever been before in my life.
Will this trend continue?

The market has gone nuts in the last four years - and not too many are talking about it.  In the media, we are treated to sob stories about people who can't pay back their student loans, or how people out of work for five years are going to lose their unemployment benefits.  The general tone of the press is "ain't it awful" and there are a lot of depressed people out there who still cite the "down economy" as reasons for whatever it is they want to justify.

But in the real world, well, inflation is non-existent, unemployment is about at an average level, and the economy has been growing at a slow but steady rate since Obama took office.  People who complain about conditions today really need to go back in time to 1979, 1959, or 1929 and see what a real recession is all about.

The Dow, as I noted in my recent posting on gold, has gone from 6,000 to over 16,000, nearly tripling in value.  All of my investments (except perhaps, Real Estate) have gone up about 10% a year - or more - in the last few years.  I am wealthier today that I have ever been in my life, unless you count those few short crazy years around 2005, when, on paper, I might have been wealthier, as I was sitting on over two million dollars in Real Estate (and holding over a million dollars in mortgages!).   But unrealized gains are not real profits, and the brief crazy inflated prices of that era popped quickly and came back to Earth.

All in all, I can't complain.  I got out in time, for the most part, and managed to keep most of it.   Life is good.  I'm set to retire.  What could possibly go wrong now?

Well, like anything else, what goes up, can go down.  And in 2014, I think we will see a leveling of the market, and perhaps a few dips.  Or maybe that is what I am hoping for - rather than a collapse as we saw in 2009.  Time will tell, and my time machine is out of order.

But I don't see another year of dramatic gains, despite all the economic good news.   Why is this?

1.  Inflation is picking up, as the economy recovers.  This will increase prices and squeeze profits somewhat.

3.  As stock prices rise, the effective rate-of-return decreases, as with higher interest rates, stocks have to compete with other investments.

The last one is probably the most important.   Right now, a company can get by with an Earnings Per Share of less than 5%, often less than 3%, as interest on bonds and other investments are pathetically small.  When the Treasury is paying in fractions of a percent, getting 3% on a stock seems like a good deal.

But suppose interest rates go up?  Suppose we go back to the "good old days" when your passbook savings account paid 5% interest?  Or even 4%?   Then a stock which has an EPS of 3% looks pretty sad.   And one with a dividend of 1% looks pathetic as well.

In order to keep the stock price up, companies will have to increase earnings and dividends, which in turn means cutting cost or raising prices.   And since you can only cut so many costs or raise prices so much, this could mean than stock prices drop - slightly.

For example, assume ACME company pays a 2% dividend.  That 2% is based on a share price of $100 a share (or $2 a share).  Not a very sexy investment, but 2% is better than what the Treasury is paying, so you hang onto the stock.

A year later, interest rates rise, and many government bonds are now paying 2% or more.  So you sell your ACME stock and invest in government bonds?  Maybe.  The thing is, people looking at ACME stock now think, "This isn't such a hot investment" - and the stock price drops.

Say it drops to $66 a share.  That same $2 dividend now represents a 3% rate of return on your investment.  The rate of return has gone up, merely because the share price has gone down.

Now, assume that in a growing economy, ACME is able to profit more.  They have cut costs to the bone in the last few years, and are now raking the benefits of that cost-cutting.  And as the economy recovers, they make more sales.  So instead of paying a $2 dividend, they pay $2.50.   For a 3% rate of return, the stock price may settle at $83 a share.

You can play with the numbers.  The point is, the share price is based not just on what "people are willing to pay" but also on an analysis of the rates of return.   And if people expect a certain rate of return in a market, that may affect the share price.

Of course, there are a whole host of other considerations - will ACME go out of business?  Or will they buy out a competitor and double their business?  Much of the "gambling" aspect of stock prices is based on people trying to perceive the future of the company in this way.

But overall, I think the economy will continue to grow.   With the GOP now willing to negotiate with the Democrats, we may avoid these idiotic "shutdowns" and "showdowns" for at least another year.  And the resultant stability will result in an improved market - and a better worldwide perception of the value of the dollar and the security of American debt.

But what will actually happen is anyone's guess.   A meteorite could wipe out the Earth.  War could break out.  Who knows?  The best you can hope to do is diversify your portfolio and try to be prepared to bad things to happen - as well as good.