Fads and the Internet 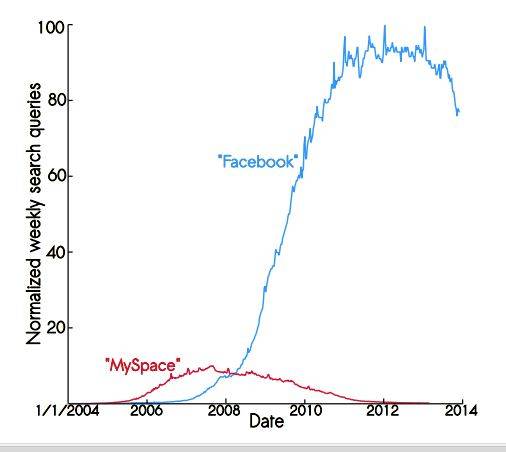 The Princeton study uses this chart of search hits to argue that Facebook is already on the decline.  However, search hits and use of the site may not be related.  Searches on the word "Facebook" may have peaked in 2012 because of the IPO.  Users of the site tend to not to search for it, but go to a bookmarked URL or use it as a home page.  Still, it is an interesting study.

Interesting article about a non-peer-reviewed study from Princeton, which argues that social media sites are like viruses - they spread exponentially and then suddenly collapse (I have immunization at this point).

It is an interesting thesis.   During the heyday of the "dot com" era, people scrambled to buy up companies or buy stock in companies.  I think the thinking was, a few companies would become the next GM, GE, or AT&T of the Internet - major brands with staying power.

And perhaps that was true.  Amazon traces its roots to that era, as does eBay.

In Dot Com Mania, round II, I think the same mentality took hold.  But companies that seemed like sure things, such as Groupon and Zynega, are on the ropes now, and looking to fall apart in short order.

Fads in general have this viral effect, whether it is beanie babies or colored wristbands, or Car sharing or whatever.

I saw the first fad in my life back in 1968 or so.  I was in the third grade, and one day this girl brought with her to show-and-tell, a set of "clackers".   Clackers were a pair of glass balls, about 2" in diameter, joined with a short piece of rope.   You would hold the rope in the center and make the balls "clack" together.  There were some tricks you could do with them.

Overnight, they became a sensation, mostly among the girls.  Every girl in class had to have a pair of balls (pardon me, I couldn't help it) and play with them all day long.   Woe be to the ugly girl whose parents would not buy her a set of clackers.

Parents became alarmed.  The PTA was up in arms.   This was distracting from schoolwork!  Principles at various schools were banning them from school grounds.   Reports were heard that the glass balls could shatter and poke your eye out.

Of course, this sort of thing just enhanced the aura of clackers - which were now contraband at school.

But just as suddenly as they appeared, clackers disappeared.  Like a rapidly spreading virus, it burned itself out.  By the end of the school year, clackers were being tossed in the trash, or left forgotten in a school locker.

Since then, with regularity, we hear reports of the next latest 4th-grade fad.   Virtual pets.  Some kinds of snap bracelet or jelly bracelet or whatever.   It all started in the 1950's with the hula hoop, of course.

Fads are fads.   That's what they are - a craze that make little or no sense, and after a time, people wonder what the fuss was all about.

Confusing fads with permanence is always a bad bet.   Trying to follow every fad and trend - and spending top dollar on a fad - is a sure way to go broke.  And the lower classes are usually the ones who get sucked into this the most.

Remember the beanie babies?   I can't tell you how many redneck friends told me they were going to fund their retirement with their beanie baby collection - now that the Princess Di doll is worth $5,000 and all.  Today, I think they are buying Bitcoins.

The only thing consistent about the Internet is CHANGE - and change roars across the Internet like a wildfire.   Sites that were once hot, are not.   And sites morph and change from one thing to another.  eBay started out as America's garage sale.  Today it is little more than a storefront for power-sellers.   Amazon was all about books, but today, heck, I think you can buy anything including human organs on the site.

So what does this have to do with Facebook?   Well, if the Princeton study is right, Facebook could lose its popularity in a real hurry.   Of course, Princeton might just be jealous, as no social media sites are being developed on their campus, right?

But I suspect they are right.   Facebook is still reporting that their user base is increasing in size - and this may be true, if they are still expanding in foreign markets - and among older users.  According to one report, use by teenagers is down by 25%, mostly because today's young people are not signing up for the service as much as their older siblings.  Use by high school students may be down by more than 50% - again, not because people are quitting but because the next generation isn't signing up.

You have to manually delete every photo, posting, wall post, update, etc. and then erase every element of your profile, manually, and then change your username to something like "Joe Smith" and THEN close the account - if you want to leave no footprints on Facebook soil.

But the other half of the problem is that if you leave Facebook, people will say, "Gee, why haven't I seen you on Facebook?" and that gets awkward.   So a lot of people STAY on Facebook, I think, even if they have reservations about it.

And I think that is why it could collapse in an avalanche effect.   Rather than slowly petering out, it could just come apart all at once.   Group Psychology is an interesting phenomenon.  Disconnected people can decide to all do the same thing at once - like lemmings.   Wars are started when people all get agitated against an opponent - and largely end when people, as a group, simply get tired of war.