Are Lawyers Really Offing Themselves? 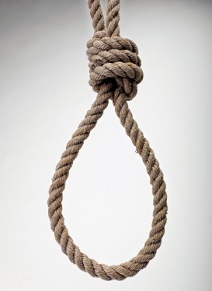 Are lawyers really offing themselves? And why?

According to a recent CNN piece, the law business is creeping up on Dentists, in terms of suicide rate.  Lawyers from the big city and even small towns, are doing themselves in, perhaps because much of the law business has been in downturn lately.

I was reading one of those "100 best places to work for" lists the other day (they are bogus, by the way, just as U.S. News and World Report college rankings are specious).   I was amazed that some law firms were on the list, including some that friends of mine work at.  What was more amazing was that the "average Associated Salary" was $214,000.

That is a lot of money, to be sure.  But in the legal world, it is even more to bill.  Traditionally, most firms required that you billed three times your salary, to cover overhead (1/3) and partnership profit (1/3).   That is a staggering amount of profit, to be sure.  What other industry has a 33% profit margin?   Some firms go further - requiring a 50% profit margin - so the poor Associate has to bill four times his salary.

No wonder they are jumping out of windows.

The joke is, I hardly bill more than two hours a day - if that - in my daily work.   Associates at a firm bill more, of course (they actually work and don't write a blog).   But it is darn hard to bill a full eight hours a day.  Not everything you do is billable.   You could bill your time, but the client won't pay.

In my field of Patent Prosecution, it is tough.   Major companies won't pay more than $5,000 to $10,000 for a Patent Application - a number that has gone down since 1989 when I entered the field.   We charge less today for Patent work than we did in the past.

And we tend to do transactional billing.  You may spend 80 hours preparing a Patent Application, but you can only bill maybe $7500 - not the $22,000 in billable hours that you have accumulated.

So what, you say, too bad for lawyers.  And I have to agree, in part.   For me, it is not an issue.  I saw the writing on the wall and realized that I would work myself to death trying to make billable hour quotas in the Patent Prosecution business - working for some other firm.

So I stared my own half-assed solo practice and, well, I'm having a ball.  I'm not jumping off the Lanier Bridge anytime soon.  I fixed it up so I don't have to work anymore if I don't want to.  So I work less, make a whole lot less money and enjoy a lot more free time.   How much less money?  Almost enough to qualify for food stamps.   No mortgage means no income needed!

And some of my high-income big-name lawfirm friends actually say they are jealous!  Go figure!

So, on the one hand, I am chagrined to hear that young lawyers are making four times as much as I am.  On the other hand, they are literally killing themselves doing it.  It ain't worth it.

But there is something else besides the relentless billable hour pressure that is driving these otherwise smart people to act dumb.  And killing yourself is the ultimate dumb, unless you have a terminal disease or something.

I mentioned before how people making a lot of money often are unhappy.   No matter how much they make, it ain't never enough, as their lifestyle expands to accommodate the income level, and they just spend more and more and never accumulate wealth.

They literally feel they are on a treadmill, working harder and harder, and getting nowhere.  Late at night they come home to a complaining wife who wants even more stuff to buy, and children who view them as an ATM machine.  Running away or jumping off a bridge start to look like viable options.

And I know this because at one time in my career, I felt the same way.    I read about husbands that just walked away from jobs and family and thought, "Gee, I get that.  This doesn't seem like fun, anymore!"

But rather than do something drastic, I decided to do something drastic instead.   I started my own practice, and after a few false starts and some dead-ends, I figured out that I could work very little and make just a little - and be happy with what I was doing.   The best part was not having to depend on a steady stream of cases and clients - and being able to tell problem clients to fuck off (in so many nice words).

So please, if you are a young lawyer (or even an old one) and are thinking about ending it all because the stress of lawyering is too much, stop and think about it a bit.  You can do things differently in your life - and be happy.

Yes, this means getting off the hamster-wheel of status.  Stop worrying about what others think of you, and worry about what you think of yourself.   Who cares what your fellow lawyers think?   Or put it this way - what will they think of you if you off yourself?  Not much.   Better off to be a "loser" like me than a real loser.

It also means having a long talk with your spouse about priorities in life.   The mini-mansion in the cornfield is killing you, and it is time to dump it.  Leased cars and designer coffees are false values.   You have to start over doing something differently than what you did before.   Otherwise, you are trading one hamster wheel for another.

Sadly, some spouses don't get this - and would rather divorce their husbands (and demand to be supported in a manner "to which they are accustomed to") than work together as a team.   If that is the case, I don't know what to say, other than maybe shoot the wife before you shoot yourself.

But seriously, there is more to life than billing and making money.  When the practice of law (or medicine) becomes all about making as much money as you can, the joy in it evaporates quickly.   You become a victim caught up in a money-machine - a hostage on the money train.  Get out while you can - and take charge of your life.

UPDATE:  One other reasons lawyers have a lot of stress, in addition to billing requirements, is the amount of responsibility involved in the work.   If you work at a "job", chances are, you go home at night and forget about work.   If you make a mistake at work, the worst thing that can happen is you lose your job.   For an Attorney, if they make a mistake, they can be sued out of existence or their client ends up on Death Row.   For Doctors, this stress is even worse - patients can DIE if you are not careful.

Yet the pay for Doctors and Lawyers is not that much above what a lot of "no-stress" jobs pay.   All that stress, and nothing to show for it.   Better off being a NYS school teacher and making a hundred grand a year to teach social studies.

I filed a case the other day and made a mistake in the filing fee - a $5000 mistake.  Ouch.  That comes out of my pocket.   I'm betting your life doesn't have these sorts of issues, does it?
Newer Post Older Post Home