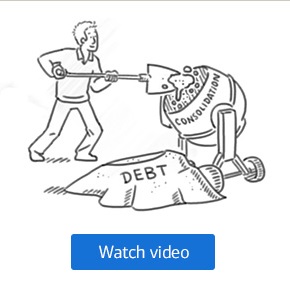 Bank of America offers helpful financial advice that benefits Bank of America.   A five-minute video about debt ends with a pitch for debt consolidation loans.

Welcome to the real world.  That's what happens when you bounce a check at any bank, my friend.

I love Bank of America because they have branches everywhere, so I can go to an ATM and get money without paying ATM fees.   Also, I can make deposits at these same ATMs and have money credited immediately.

So, if you have money, Bank of America is a great and convenient bank to use.

On the other hand, if you are poor and think poor, like I used to do as a youth, you might hate Bank of America.   Why is this?   Well, if you are living "paycheck to paycheck" and spending every penny you have, mostly on pot and beer - and bouncing checks and overdrawing your account regularly - well, you likely will get bit on the ass by any bank.   Since BoA is so popular and huge, it is more likely to bite more people on the ass.

So when you go online and hear people whine about being charged a $20 bounce fee, consider the source.

Others still hate Bank of America because of the Countrywide mortgage scandal.   Yea, that was a real mess, and as a shareholder in the bank, it certainly pissed me off (and as a taxpayer as well!).   But BoA didn't make those loans - they foolishly overpaid for Countrywide after Countrywide had already made a whole lot of bad loans.   So BoA isn't the "bad guy" here, just another victim like the rest of us.

Now, of course, some folks are all mad at Bank of America because they had the audacity to foreclose on those bad loans - as if they were supposed to "forgive" a $500,000 mortgage and just let people have free houses (that would really piss me off!).   But they did what all banks did and do - foreclose when someone doesn't make the payments on their loans.   And if this is some big mystery or surprise to you, please grow up.   That's how mortgages work.

Sadly, an increasing number of people in this country believe (no, they really believe!) that you should be allowed to keep a house, even if you can't pay for it.  These are the same people who think that the "Evil Landlord" shouldn't be able to evict you, just because you can't pay the rent.   This something-for-nothing mentality is particularly rabid in the Northeast, and as a consequence, the cost of living there is a lot higher.

What kind of torques me about Bank of America is that they have been running a series of videos and ads on their website, purporting to give good financial advice to people.  Sadly, this McAdvice is not very well thought out.   The video above starts out with the premise that, "Hey, everyone has debt, right?" which is a really sick normative cue if you think about it.

In any argument, challenge the premise, first.  Chances are, the premise is what the opponent is using to sneak one past you.  And here the premise is that being a perpetual debt-slave is just the way things are.

While some of the advice is sound - prepare a budget, for example - the way they go about it is idiotic.  They show the doofus above preparing a budget for his car loan, house loan, and "coffee" (and you know that is a code word for "Starbucks").   A better approach might be to say, "Gee, doofus, maybe instead of budgeting for overpriced coffee drinks, you might just try giving them up entirely!"

Oh, but that would involve sacrifice.  Next slide.

So, that overpriced $5 coffee drink that you put on your credit card and paid $3 in interest on (but think of the flyer miles!) can be rolled over into a 30-year-note at the modest interest rate of 7% or so for a second mortgage on your home.   Food that you pooped out two months ago can be financed so that you never pay it off until you are 70.

And this makes sense we are told, because the interest rate is lower.

Yea, it may be lower, but it is amortized over 30 years.   Funny how they forget to mention that.

And while they make the disclaimer that the "debt consolidation loan" can be helpful provided you don't take on new debt, the reality is, of course, that most people (Raise your hands!  We all did it!)  will go out and rack up new credit card debt once they have "paid off" their cards using these consolidation loans.

A better approach, I think, is to create a budget, and then slash it mercilessly.   Rather than budget for designer coffee, cut it out entirely.   $5 a day may not sound like much, but it puts an $1825 dent in a credit card balance in a year.   Find a few of these $5-a-day deals you can cut out of life, and you can pay off the debt in a real hurry.

But again, this gets to the good/evil nature of Bank of America - or any bank, for that matter.   If you are fiscally responsible and don't fall for these deals, it is a great bank with great service (whose stock price continues to climb).   If you are a doofus who is self-indulgent and irresponsible, well, they will bite you on the ass again and again, until over time they will own you, lock stock and barrel.

What is great about America is that you do have a choice in the matter - whether to use or be used.   And the decisions made are not large and dramatic, but small and individual.   One overpriced coffee drink at a time....