How Much You Pay for Bounder? 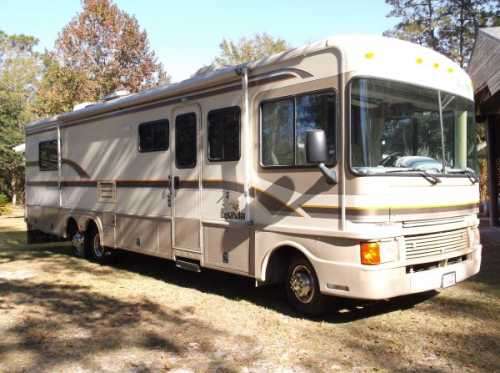 I once went to look at a Bounder like this one pictured.  It was an interesting story.


Back in 2000 or so, we were thinking of buying a motorhome.  Motorhomes are pretty expensive and depreciate like cars - and they use a lot of gas.  Most get under 10 mpg, some far under.  Camping isn't as much fun when you are paying a dollar-a-mile just for gas.

But in the early days of the Bush Presidency, gas was still Clinton-era cheap, so we went to look at this one unit near Mt. Vernon.   It was parked next to a house on a side street in a development of nice middle-class homes.   When we pulled up, an older gentleman, with an oxygen tank in tow, was polishing the engine on his black Lincoln Town car.   From the stickers on the car and the flags on his front lawn, it was not hard to figure out that he was a retired Navy officer.

As we introduced ourselves to him, we saw a movement at the front window - where all the venetian blinds were drawn.  Someone had been peeking through the blinds, and when they saw we looked back, they quickly withdrew their hand, leaving the blinds to rattle.   "That's my wife," the man said, "She doesn't like strangers."

He showed us the Bounder, which was covered with algae and starting to sink into the side yard.  He had not used it in a few years, and instead of selling it when he stopped using it, he decided to keep it, on the premise that maybe he and the wife would go camping.   She hated camping, he confided, and he was on oxygen.

It's a man-thing, I guess, keeping boats and cars and campers - even airplanes, long after you are done using them.  Selling the hobby car is akin to admitting your own death, so men keep these things and kid themselves that any day now, they are going to take them out and use them, when in reality they are just using them as a lost talisman of youth.

I think he wanted $30,000 for the Bounder and we decided to take a pass for the time being.  He wanted too much money and it was more coach than we needed.   And it would have needed a lot of work, having sat so long.   But I gave him our card with my phone number, and promptly forgot about it.

Six months later, it is Christmas, and we were at the campground on Jekyll Island in our 5th Wheel trailer.  The brick cell phone rings, and I answer, "Hello."

A high-pitched oriental woman's voice immediately replies, "How much you pay for Bounder?"

I realized this was the wife of the fellow who showed us the Bounder six months earlier.  The old dude had kept my card, apparently, and now the wife wanted to sell.

I was a little flabbergasted.   This woman had clearly gone through the five stages of grieving awfully fast.

We talked for a while longer, and I managed to parse out what had happened.   He had been in the Navy, no doubt stationed overseas, perhaps in the Phillipines.   He found what he thought was the love of his life.  She found what she thought was a ticket out of Manilla.   They both got what they wanted, I guess.

She played the waiting game, and when he finally kicked the bucket, she was ready to sell it all and go back to Manilla and live like Imelda Marcos.   But first she had to get rid of all his shit.

"How much you pay for Bounder?" she said, over and over again.

Since we were out of State and really weren't interested in dumping that kind of money into an RV, we took a pass.   I suggested she call a dealer, if she wanted quick cash.   No doubt she was able to liquidate it all in short order.

But it is a story that made me think - about people and relationships, and also how people chase 'things" in their lives.   I felt sorry for the old man - and his wife.  They did not appear to have a loving relationship, even if he had an immaculate Town Car with a polished engine and a huge motorhome that was rarely used.   Maybe they chased after things, and not love.  I don't know.

We still joke about it, though.   I won't be cold in the ground, before Mark makes a phone call and says,